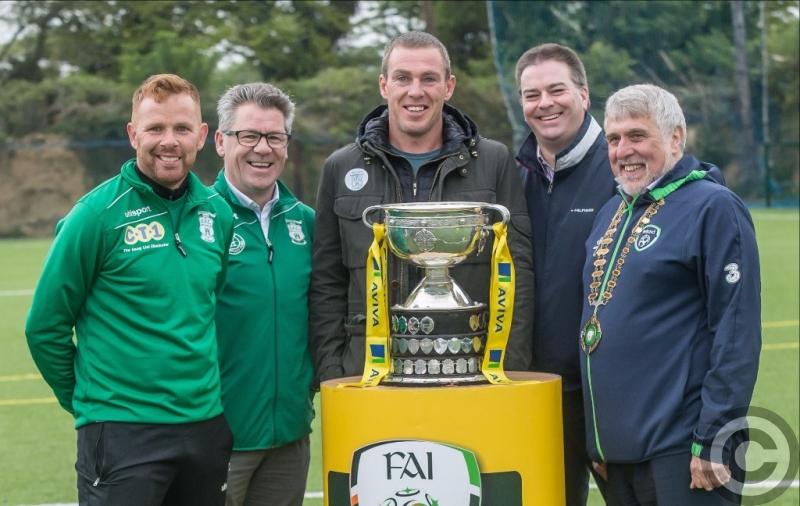 Hard work on the pitch has helped Evergreen reach the FAI Junior Cup final, but the work-rate of Packie Holden’s is matched by the efforts of a dedicated team behind the scenes.
“It’s massive for the club,” chairman Peter Henebry said of seeing his club make the final. “Everyone is aware of what is going on. You’d have people waving at you in town, shouting ‘see you on the 13th’.
“We’ve had a lot of great phone calls from some of the old guys in the club, guys like Dick Denieffe, Billy Walsh to wish us luck,” he added. “They’re all thrilled for the club and will be there to cheer us on in the Aviva.”
The city side will be represented by a tribe of supporters, with high numbers expected to make the trip to Dublin on Saturday.
“The club has a number of busses going, but reckon there’ll be 10 to 15 leaving Kilkenny on the day,” he said. “What’s adding to the occasion is that kids are free. Adult tickets are €10 and we’re doing the busses at cost.
“Managers organising the players from their groups - everyone is getting into the spirit,” he added. “It ripples through the club.”
That spirit has been strengthened in recent years, firstly by the purchase of their Kells Road grounds and, in later years, by the addition of more pitches.
“I remember when we planning the development here and we discussed bringing all our members out here to train and play in the one place,” Henebry recalled. “The all-weather pitch has been massive in that sense; up to then we had 30 teams training in town at different times.
“With everyone training here you get parents bringing their kids out to the pitches. They stop into the shop, maybe they buy some club colours.
“They’re going ‘this is where my kids will play for the next 10, 15 years and they’re getting involved and volunteering to help - that’s the club mentality. That’s what adds to the club. And when you bring it all back into the one spot you really find out how strong the club is.
“The excitement must what the likes of Ballyhale Shamrocks and James Stephens felt when they were preparing for club All-Ireland hurling finals,” he said.
“The younger teams feed off it when they see the junior players here. You can see them hanging on to watch the junior teams train. There’s a great connection between the teams in the club - they’re all in it together.”
That sense of unity is carried on by the committee, who meet every week to discuss club plans.
“Every week of every month we meet here every Tuesday night,” he said. “There’s the committee members come together - no-one chairs it - but all have their say on what jobs need to be done.
“Everyone mucks in,” he added. “It’s amazing what you can do when you put good people together.”