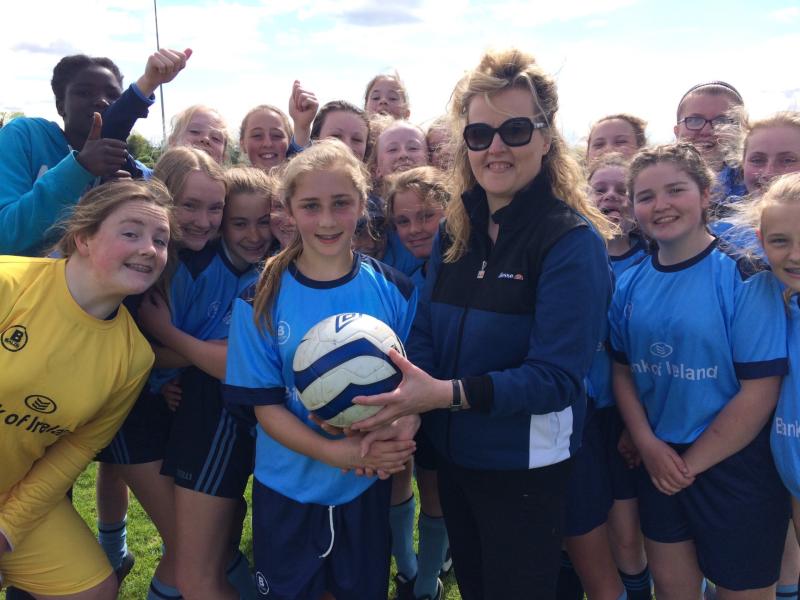 The Presentation Kilkenny had a dozen reasons to celebrate as their First Year soccer team powered their way to a national final.
The Kilkenny girls proved too hot for St Caimin's to handle, hitting their Clare rivals for 12 goals in their national semi-final today (Thursday).
The Cats hit the ground running in Portlaoise, taking just three minutes to go in front. Ellen Molloy hit the opener, then three in as many minutes from Ciara Ryan (2) and Molloy had the Pres comfortably ahead by the 16th minute.
They didn't let up after that. Sarah Barcoe took control of the game, bagging a hat-trick in as many minutes - the second coming from long range - to leave her side 7-0 up at the break.
The Kilkenny girls didn't let up in the second half, but needed a fine double save from goalkeeper Ellie O'Neill to preserve their clean sheet. Niamh Phelan made it 8-0 soon after, and while Abby King pulled a goal back for Caimin's they weren't allowed to build on it.
The gap was back to eight goals when Emma Shortall scored in the 44th minute, before Barcoe's fourth of the afternoon took her team into double figures. There was still time for Ellen Molloy to complete her hat-trick, while an own goal put the seal on an emphatic victory.
The Pres will hope to continue their hot streak when they take on Scoil Mhuire Buncrana in the final on May 24, with a venue to be decided.