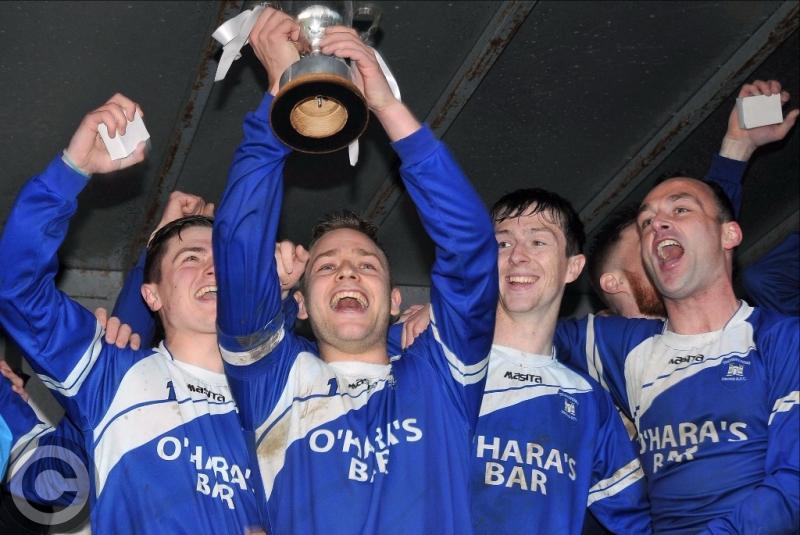 It’s been a season to remember for two of Kilkenny soccer’s best teams. Now, 12 months on from their last epic battle, they’re back at square one again – duelling for the McCalmont Cup.
For Thomastown United and Evergreen A, the last year has taken both clubs on a real rollercoaster ride of highs and lows. They’ll add another chapter to the tale when they meet in the blue riband competition of junior soccer in Derdimus on Saturday.
And there’s no doubt that both sides will be relishing the chance to have another crack at the opposition!
For the defending Cup champions Thomastown United, it has been a year to remember. Propelled forward by Paul Dunne’s penalty shoot-out heroics in last season’s ‘Thunder and Lightning final’ United have tasted some real joy in the current campaign.
Without a doubt their best result came in another Cup competition. They made the soccer world sit up and take notice when they sent Shamrock Rovers packing in the Leinster Senior Cup.
Stephen Connolly’s last-gasp goal at a packed United Park proved to be the stuff of dreams as they KO’d the most successful side in the League of Ireland – remember, they set that tie up after a penalty shoot-out win over Navan Cosmos – and set up a meeting with the league’s Premier Division champions Dundalk.
The fairytale story ended on a sour note in Oriel Park, as the home side won 6-0, but the game served its purpose – it got Thomastown over a tough spell of the season when they parted ways with components of the playing and management team in goalkeeper Aidan Hynes and joint manager Richie Watson.
With Paul Dunne now back between the posts, and Davy Foley joining Stevie Walsh in the dugout, United have set their sights on retaining their Cup title.
Like their opponents, Evergreen have found their greatest days have come in Cup competitions. Unlike Thomastown, they have the added lure of going for a domestic treble.
Losing the McCalmont Cup to Thomastown was a bitter blow last term, especially as they won both the Maher Shield and the Premier Division title (a crown they wrestled back from United) but bounced back in emphatic style.
The Shield is safely back on the Kells Road for another season, but it was the team’s route to the FAI Junior Cup final that garnered the lion’s share of headlines in 2017.
After nine rounds of competition the road came up agonisingly short as Sheriff pipped them to the Cup, but Packie Holden’s side were quick to tune back into local league life as they made up ground on early leaders Freebooters A.
Little by little they reeled their old rivals in, drawing level when they beat the Blues 2-1 on Saturday night.
Scoring Form
That scoring form has been reflected in their shortened run to this year’s McCalmont Cup final. After successive walkovers from Castlewarren Celtic and St John’s, Evergreen finally tasted Cup action when they beat Bridge United 6-1 thanks to goals from Sean Barcoe (2), Mikey Drennan, Ben Hickey, Lee Delaney and Dean Cornally.
Barcoe and Drennan were at it again when Evergreen beat Deen Celtic 5-0 in their semi-final. With further strikes from Niall Andrews, Jamie Owens and Conor English, a tally of 11 goals in two games from eight different scorers highlights the threat this side possesses.
Thomastown United haven’t been shy themselves when it comes to filling their boots in the Cup. Unlike Evergreen they have played four games but, like Saturday’s final opponents, they know their way to goal. They opened with a 6-0 win over Lions, blasting through with a brace from Mick O’Neill and goals from Sean Brennan, C.J. Browne, Marty Lawrence and Stevie Wemyss.
They continued their impressive run with a 4-0 win over Paulstown 06. The result wasn’t without its problems, as they were kept at bay by a dogged Paulstown defence, but two Stephen Connolly goals, together with more from Paul Dempsey and Mick O’Neill, sealed the win.
Their hunger for goals showed no signs of slowing down in the quarter-finals, where they beat Evergreen 46 7-2. With Andy Kavanagh (2) and Sean Brennan (2) leading the way Ollie Kirwan, Aaron Kehoe and Rory Monks completed the win as they set up a semi-final meeting with Highview Athletic.
The semi-final ended with a 3-0 win, but the performance was notable for more than the result. United showed a composure in victory, shutting down their rivals and disrupting their game-plan thanks to Dessie Walsh’s early goal, before late strikes from Walsh and Monks put a greater gloss on the scoreline. That brought their tally to 20 goals for the four games, scored by 12 different players.
Does that augur well for a goal-fest in Saturday’s final? Here’s hoping!
Match Officials
Saturday’s McCalmont Cup will be refereed by Nicky Marnell. Nicky was also part of an all-Kilkenny team who officiated at the Leinster Youths’ Cup final between Nurney Villa and St Kevin’s (he was joined by Tristan Eardley, Jimmy Nolan and Vinny Kiely).
Packie Geoghegan and Vinny Kiely are assistants. Mitch Corrigan is the fourth official. The match officials are sponsored by TC Tyres, who are celebrating 25 years of providing match kit for the Cup’s officials.