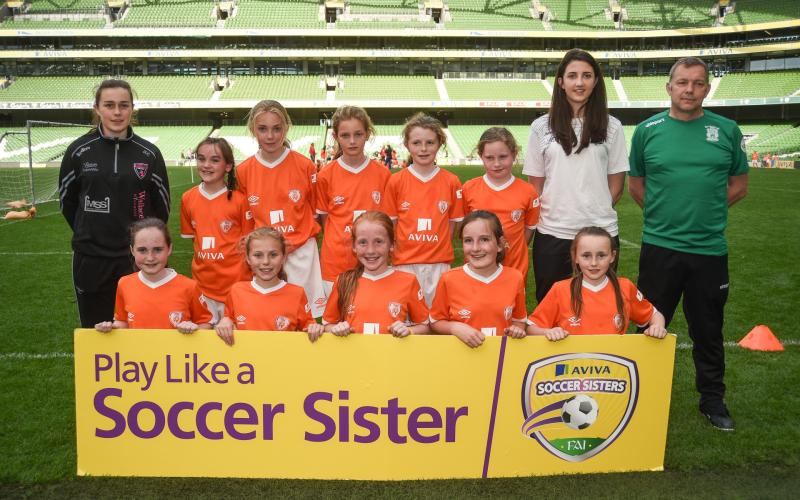 Kilkenny club Evergreen experienced the magic of the Aviva Stadium as they took part in the Aviva Soccer Sisters Festival of Football.

The clubs were joined by several Republic of Ireland Women’s senior internationals including Rianna Jarrett, Aine O’Gorman and underage international Lauryn O’Callaghan along with the FAI’s Head of Women’s Football, Sue Ronan.

The clubs took part in four rotating skills zones on the pitch that tested their passing, dribbling, shooting and attacking and defensive drills. The players also took part in some small sided games and practised putting the ball in the Aviva net.

After this the players had a meet and greet with some of the Republic of Ireland women’s national team and Sue Ronan, where they were presented with medals for taking part.

"Over 25,000 girls have come through the programme since it began in 2006. It has proved to be a great way of introducing girls to the game, and many have continued in the game by joining their local club."

"We were delighted to be able to open the doors of the Aviva Stadium to these eight clubs for the Aviva Soccer Sisters Festival of Football," said Mark Russell, group sponsorship manager with Aviva Insurance. "We wanted to help expand the reach of the Soccer Sisters camps across the country to help get more clubs and schools involved in 2017 and we successfully achieved that with an increase of 25% in attendance.

"This is another example of Aviva’s grassroots programmes where, just as in our sponsorship of the IRFU’s Mini Rugby, we are helping to create the heroes of tomorrow who we hope will be wearing the green jersey in years to come."

A video of the day's action is available here

More information on the Aviva Soccer Sisters programme is available by logging on to www.aviva.ie/soccersisters