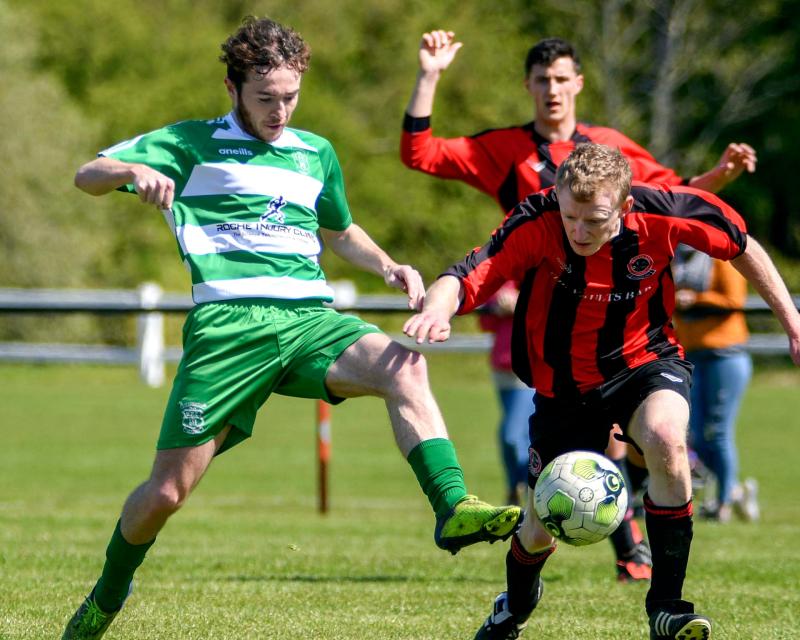 Ben Hickey was among the goals as Evergreen A increased their lead at the top of the table, while Deen Celtic eased their relegation woes when beating Fort Rangers

The games are beginning to run out but there’s still plenty to play for at either end of the Kilkenny & District League’s Premier Division.

Deen Celtic did their hopes of avoiding the drop a real boost when they grabbed a vital win away to Fort Rangers. Colin Phelan, Johnny Dowling and Richie Lynch were on target for Celtic in Buckley Park, who rounded off their season with a 3-0 win – their first success since a 1-0 win over Freebooters A back in January.

As it stands Celtic are now one point outside the relegation zone, having leapfrogged Evergreen B but, with all their games played survival is now out of their hands. Conor O’Neill’s Evergreen side have two games left to play – home to Freebooters A before finishing away to Thomastown United A. One win or two draws will keep them up at the expense of the Castlecomer men.

At the other end of the table Evergreen A strengthened their claim for a third straight Premier Division title when they beat Thomastown United A 4-0 at United Park.

United, the last team to hold the title, were no match for Gary Maher’s side as they took control of Thursday night’s game with a first half goal from Niall Andrews. They had a chance to get back into the game when awarded a penalty in the second half, but Philly Johnston made a fine save, diving to his left to beat the ball to safety.

Evergreen kicked on, doubling their lead when Dean Cornally ended a fine surging run with a low drive beyond the ’keeper. Ben Hickey added a third, charging down an attempted clearance and nicking the ball past a defender before finishing to an empty net, while Chris Whearty wrapped up the spoils with a fourth.

Elsewhere Highview Athletic lost more ground on top spot when they went down 2-1 away to Freebooters A.

David Grincell did the damage, scoring twice for the city side as they recorded their sixth home win from seven league games this season – only Evergreen A have taken points at the Fair Green.

The result also snapped an impressive run for Highview. They hadn’t been beaten away from home in the league this season until Thursday’s game.