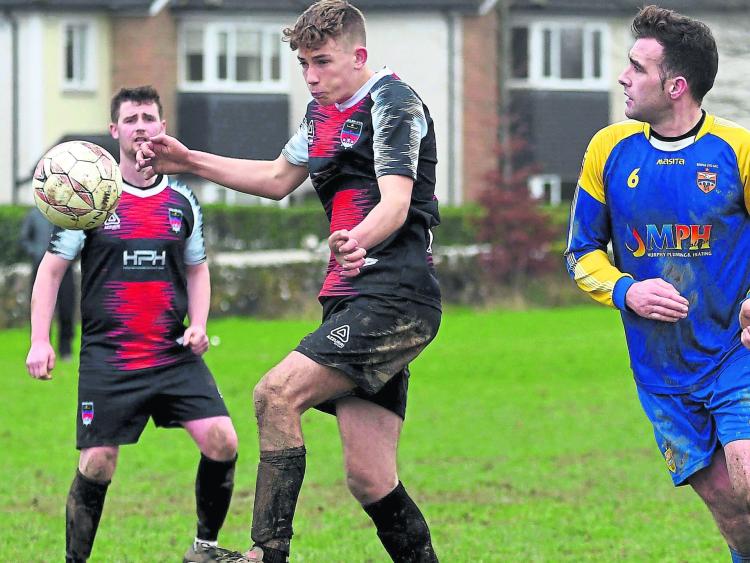 Bridge United ended 2019 on the front foot, and with a place in the semi-finals of the Maher Shield to boot - but they had to work doubly hard to get there.

The Goresbridge outfit looked to be heading for the exit door when they trailed a Brian Doheny-inspired Callan United on the Fair Green - not once but twice!

Doheny was the man of the hour for the home side, pulling off a series of impressive saves to frustrate the visitors time and again. Coupled with that, goals from Jack Canavan and Darragh Bergin left Callan on the brink of an upset.

Bridge were being tested, but kept their cool and finally turned the game on its head in the second half.

Conor English did the damage for Bridge as they finally got their noses in front 22 minutes from time. Watching as Callan could only half clear Sean Murphy’s teasing effort into the box, English was in the right place to snap up the loose ball and slam it home.

It was a goal which was met with as much joy as relief from Bridge, who huffed and puffed for most of the game but found Callan not willing to break.

Much of that was down to Doheny, who excelled between the sticks. He was called into action early on, spreading himself to block Murphy’s quick shot after a neat one-two with David Dunne unlocked the Callan defence.

The home goalkeeper was the busier of the two in the opening stages. He made another smart save to keep out an English free-kick, then went full stretch to push away another stinging effort from the dangerman.

Doheny was on song throughout the game, pulling off another top class save to deny Bridge - and add to English’s growing frustration - with 20 minutes on the clock. He quickly made another stop, denying midfielder Cathal English, before Callan lifted the siege and stunned their opponents.

Having weathered the storm Callan, with plenty of youth in their ranks, left Bridge reeling with a stylish breakaway.

Playing their way out of trouble from the back, Eoghan Scriven carved Bridge open with a superb pass to Mark Laffan. Taking a touch, he threaded the ball through for Jack Canavan to fire past Aidan Hynes.

Bridge were rattled by the goal, but quickly cleared their heads and hit back.

Within minutes they were level, Dunne winning a crunching challenge before releasing Murphy, who skipped through a static Callan defence before slotting the ball past Doheny.

The visitors were fired up after that goal and went hunting for a second. English almost found it too, his deflected shot looping towards goal, but Doheny got back to acrobatically tip the ball over the bar.

Callan were quick to halt their momentum, however, and restored their lead after the half hour. Profiting from a wave of pressure, the home side chipped away at the Bridge defence until Darragh Bergin found room to break free on the left. He kept his cool, waiting for Hynes to move before tucking away a smart shot inside the far post.

Bridge raised their game in the second half, taking just seconds to threaten when Conor English waltzed through the Callan defence to find shooting space but when Brian Doheny made another superb save it looked like being one of those days for the visitors.

They could have let their frustrations get the better of them - but the Goresbridge side kept plugging away. Persistence paid off in the form of a precious equaliser just before the hour. Sean Murphy grabbed it, springing the offside trip to gather English’s pass with a deft touch before squeezing in his shot from a tight angle.

Callan were stung, but almost took the lead for a third time soon after.

A defensive slip gave Mark Laffan room to shoot inside the box but his goal-bound strike was superbly pushed to safety by Aidan Hynes.

That was as close as Callan would come to causing an upset. English had the final say, grabbing what proved to be the winner with little over 20 minutes left.

Having finally taken the lead Bridge were determined not to let it slip.