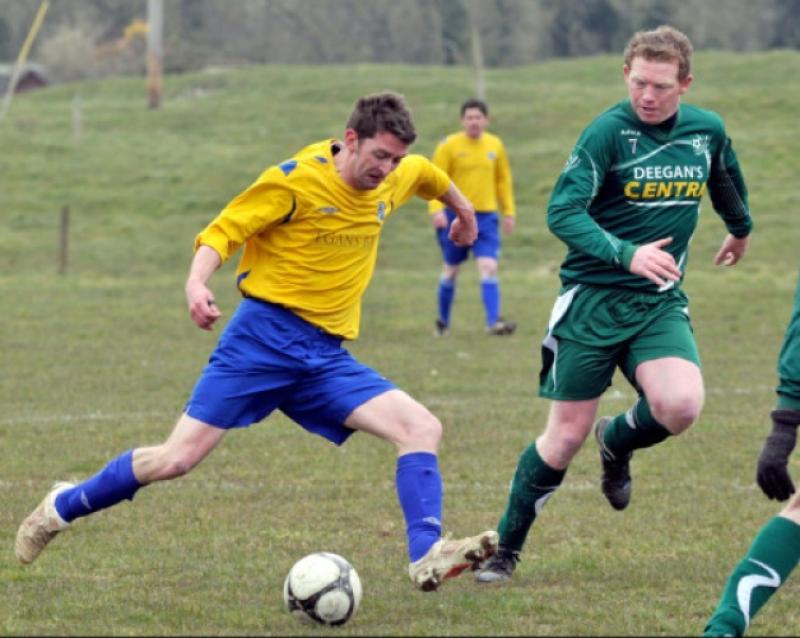 EOIN Ryan was the man of the moment as Clifden United caused an upset in the opening round of the McCalmont Cup.

The Clara side had their keeper to thank for helping them make it three wins from three in March as they got the better of Urlingford on a icy-cold morning on the Dublin Road.

Ryan had little to do in a second half where his team-mates, assisted by a strong wind, bombarded the Urlingford goal and kept the visitors pegged back in their own half.

That all changed in the last minute as Urlingford, chasing a 2-1 deficit, launched one last attack in the dying seconds of normal time. Midfielder Graham O’Flaherty was given too much time and space on the ball inside the Clara half and used it to devastating effect, splitting the Clifden defence with a low ball through the centre.

Stephen O’Flaherty raced on to the delivery but was denied a clean shot by Michael Barcoe’s crisp tackle. It seemed Clifden had escaped, but in the follow-through Barcoe clipped O’Flaherty’s heels, sending the striker tumbling in the box.

Awarded the penalty, O’Flaherty dusted himself down and took the spot-kick duties. For a split-second Clifden were deflated but the hosts’ spirits were lifted again when Ryan saved the day, diving low to his right to push the ball to safety.

That save was a hammer blow to Urlingford, who were hoping to gain some push to help turn their season around. The visitors have not had the best of seasons in Division One, flirting with a relegation battle which is still not over.

They made their task of getting a win even tougher on Sunday, starting the game with only nine men! That was the only sign that Clifden needed to push on for an early goal - James Brennan had two early swipes at target, but didn’t worry Martin Purcell or his three-man defence.

Ben Nolan kept Clifden going forward when he won a tackle in the centre and burst through unopposed, but his sixth minute shot flashed wide of the mark.

Despite the player shortage Urlingford more than held their own in the opening stages, much of it thanks to midfielders Sean Tobin and Graham O’Flaherty, the latter showing coolness and composure in spite of the number of yellow jerseys that closed him down time and again.

Tobin and O’Flaherty were at the heart of Urlingford’s first attack on eight minutes. Tobin did well to dispossess David Delaney and work the ball on to O’Flaherty, but his shot was well held by Eoin Ryan.

Incredibly, the nine men in green upset the odds when they took the lead after 12 minutes. Having conceded a needless free out on the right Clifden were punished when Tobin’s delivery took a nick off a defender and finished up inside the far post.

Now up to the full complement, Urlingford worked hard to press home their goal advantage. Stephen O’Flaherty saw an acrobatic attempt take a deflection for a corner on 15 minutes, while David Ryan’s instinctive 24th minute shot whistled over the bar.

With little going their way at this stage Clifden seemed to be in trouble, but made the perfect comeback when they drew level on the half hour. The Urlingford defence was finally unlocked when Pat Murphy headed Dermot Nolan’s free into James Brennan’s path. A clever flick took the ball over the head of Purcell, where Noel Hoyne was waiting to stab home from close range.

The wind was back in Clifden’s sails after that, but try as they might they couldn’t turn it into a second goal. They almost leaked another to Tobin in the dying stages of the half, the midfielder whipping a low free to the right of the five-man wall, but his shot finished outside the post.

With the wind at their backs it was no surprise to see Clifden throw more into attack for the second half. Sub Declan Rafter gave the first sign of their intentions with a crisp low shot, but Daniel Looby made a timely block.

They went closer again on 54 minutes, when James Brennan kept his eye on a dropping ball and let fly with a thumping volley. The ball soared over Martin Purcell, but the netminder was relieved to see the shot clatter off the crossbar.

Kevin Shortall came up from defence to take the penalty and made no mistake, coolly firing home to the bottom left corner.

The goal sparked Urlingford into life again. Michael Byrne created a great chance when he hoisted in a teasing cross but Sean Tobin’s 77th minute header was well held by Eoin Ryan.

The goalkeeper was called into action again a few minutes later after Jason Moore’s excellent diagonal ball sent Michael Byrne racing through, but Ryan dashed from his line to block the ball at the corner of the box.

Urlingford never gave up, and looked to have grabbed a late lifeline when O’Flaherty was awarded that 90th minute penalty - but Ryan wasn’t to be denied his moment in the spotlight.

Henry Shefflin in action for Kilkenny against Galway during the 2014 National League semi-final at the Gaelic Grounds in Limerick. Pic: Diarmuid Greene/Sportsfile