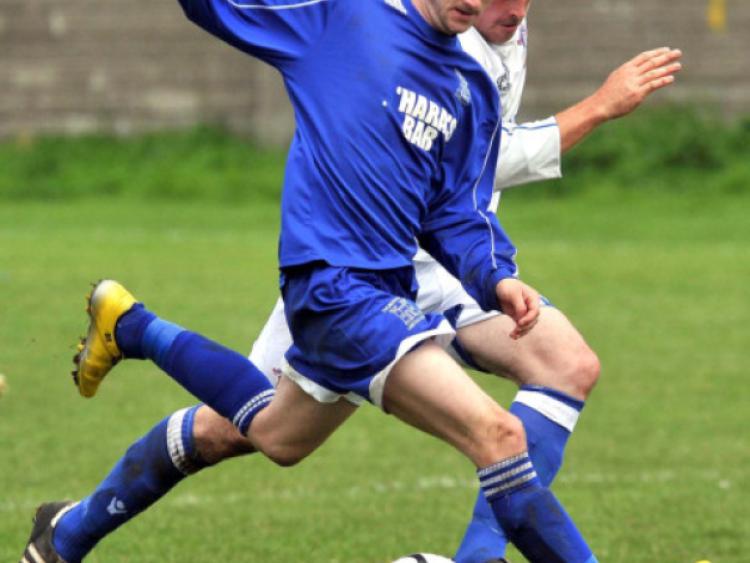 The right blend of youth and experience paid off as Freebooters A opened their season with a win - but they made life tricky at times.

The right blend of youth and experience paid off as Freebooters A opened their season with a win - but they made life tricky at times.

A 3-0 win over another side tipped to challenge for the Premier Division, Thomastown United A, provided an ideal start for the new-look Blues.

That said, it wasn’t until the closing stages of Sunday’s game that all three points were guaranteed to stay at the Fair Green.

There was a sigh of relief when, following a deep ball out of defence from Michael Falsey, Dessie Hayes won the battle for possession, then turned and coolly slotted a low shot past Rory Leadbetter to make it 2-0 to the hosts.

The second goal finally killed off the hopes of a United side who hadn’t hit top gear but were still in with a chance of snatching something from the game.

In an entertaining first half Leadbetter was the difference between the sides early on, pulling off two great saves to deny ’Booters in the opening quarter. He showed great reactions to stop Dessie Hayes’s sidefoot shot from point-blank range in the 22nd minute then, four minutes later, stayed big to deflect Nathan West’s strong shot out for a corner.

However, the netminder could do little to prevent Michael Falsey from nodding the hosts in front just 60 seconds later. James Kelly provided the opening by whipping in a corner for Falsey, who made no mistake with a powerful back-post header.

Thomastown’s stride was checked, but they were given a great chance to get back on level terms 10 minutes before half-time when a Dean Broaders flick-on hit Falsey’s arm in the box.

Broaders, back in the junior game after leaving Wexford Youths, took the penalty but his shot flashed outside the right post, letting ’Booters off the hook.

The hosts kept up a relentless pace after the restart, but didn’t settle the tie until Hayes struck with 20 to play. He made sure of the spoils in injury-time, wrong-footing Leadbetter before clinically hitting the net from close range.