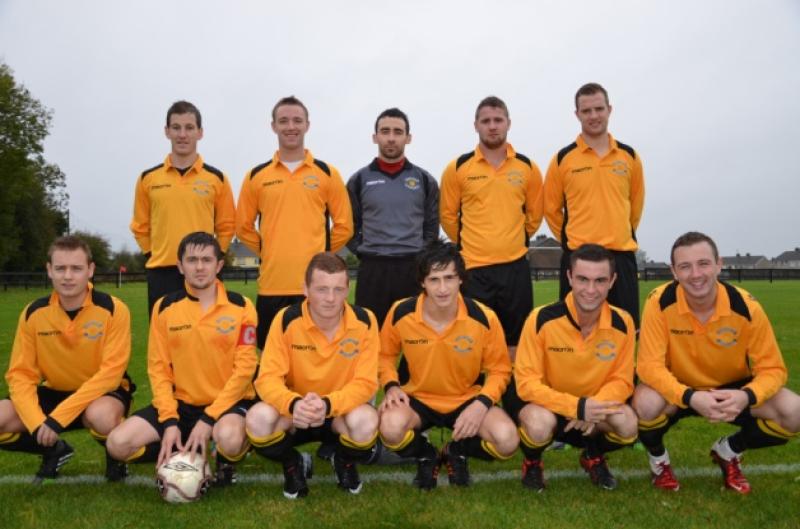 A FIVE-STAR performance saw the Kilkenny & District League roar into the knockout stages of the Oscar Traynor Trophy.

A FIVE-STAR performance saw the Kilkenny & District League roar into the knockout stages of the Oscar Traynor Trophy.

The Cats, under the management of Ollie Walsh, grabbed their second win of the campaign by blasting five more goals past the opposition.

However, Saturday’s win over Carlow in Tullow was even more satisfying for the winners than their 5-2 opener against the United Churches League.

This time, Kilkenny showed incredible powers of recovery to rally from a goal down - not once, but twice.

The game changer, as far as Kilkenny were concerned, came eight minutes into the second half - and what a way they did it!

Substitute Chris Whearty provided the first and finishing touches in a move which saw the Cats silence their hosts on a rainswept Saturday. Winning possession on the right side of the centre circle (and avoiding a crunching tackle in process) Whearty cut left and fed the ball to David Grincell.

In a flash, Carlow were cut open. Grincell waited for his colleague to race past before slipping in the return pass. With Carlow at sixes and sevens Whearty did the rest, steaming into the centre before unleashing an unstoppable shot which screamed into the top left corner.

The goal was just one of many high points of an action-packed afternoon for the visitors, but they could have made it so much easier on themselves.

Kilkenny started in a whirlwind manner, going close with two great chances inside the opening minutes.

Midfielder Paddy Cahill quickly made his presence when he dispossessed Dean Goody in midfield and worked some quick passes with Nathan West before getting into an attacking angle. Cahill did well to pull the ball back for the inrushing Grincell, who stormed through the centre, but his sidefoot shot flashed wide of the mark.

Carlow were under the cosh a little and had netminder Gavin Dowling to thank for keeping them level just 60 seconds later. There seemed to be little danger when Dean Broaders picked up play five yards beyond the centre circle but when a gap opened up he went for it. Winding up, Broaders let fly with a curling, dipping shot, but Dowling dived smartly to his left to claw the ball to safety.

Kilkenny were on full assault, but couldn’t make their efforts count. Grincell had another chance to break the deadlock when, in the 12th minute, he connected with West’s low cross from the right but his stabbed shot spun wide.

The misses came back to haunt Kilkenny - and how. With 24 minutes on the clock the hosts went in front, defender Colin Nolan rising highest at the back post to meet Mitch Kelly’s soaring free and plant a looping header in off the far post.

Things went from bad to worse for Kilkenny, who lost Broaders to injury after half an hour, but they regained their composure on 40 minutes after a Grincell header struck the hand of a Carlow defender.

Nathan West took the spot-kick duties and made it look easy. Despite facing a big obstacle in Dowling, the young ’Booters man tucked his kick away high into the top left.

Kilkenny had worked hard for that equaliser, but fell behind again inside 60 seconds of the new half. The defence was still getting organised when Michael Mullen broke down the right and teed up Dean Goody to fire at goal.

When the striker dragged his shot across the target it looked like Kilkenny had survived, but they failed to pick up Brendan Fox, who dashed in to tap home at the back post.

At that stage Carlow looked set to take control of the game, but Kilkenny’s resolution was about to shine through.

Backed by some strong work from Conor English and Chris Whearty they fought the Cats fought their way back into the game. They kept pressing, getting their due reward with Whearty’s thunderbolt.

It seemed both sides would have settled for a share of the points by then, but Kilkenny weren’t even in top gear. David Grincell almost gave them a stunning lead when, following excellent work down the right by Nathan West, he met the cross with an acrobatic waist-high volley. The downward shot bounced over the head of Gavin Dowling, but the shot just cleared the angle of back post and crossbar.

Grincell did have a big say in how Kilkenny took control of the game on the hour. A handful all afternoon, the Evergreen man deftly controlled Robert Skehan’s long clearance and eased past Colin Nolan before Sean Kavanagh hauled him down for Kilkenny’s second penalty.

Once more West assumed spot-kick duties. Once more he found the net, finishing to the right.

That goal changed the game’s complexion entirely, but Carlow could have quickly reeled in the new leaders. Sub Lee Salter almost unlocked the Cats with a diagonal ball threaded through for Michael Mullen, but Kilkenny captain Jack Poyntz made a superb tackle to thwart his opponent.

The scare was duly noted by the visitors, who simply stepped up the pace and left Carlow flattened with their fourth goal.

Even though Kilkenny had played for more than an hour on an energy-sapping pitch, the speed with which they tore Carlow asunder was something else.

In a move that began with Poyntz at the back, Kilkenny merely glided across the pitch. Poyntz zipped the ball up the left flank where it picked up by Whearty. A little flick and spin and he was gone, leaving his marker grasping at fresh air.

Dashing into the centre, Whearty laid the ball off at the feet of Grincell. A little shimmy committed the defender, who failed to spot Conor English sprinting in from the right. English timed his run to perfection, latching on to Grincell’s short pass and steadying himself before drilling a low shot beyond Dowling.

The goal marked the collapse of Carlow, who looked a spent force from that stage.

The final nail in the coffin was yet to arrive though. Having fought hard for his side all afternoon, Grincell got his reward when he grabbed Kilkenny’s fifth - and their 10th goal in the competition - with 14 minutes to play.

Like their other goals, Kilkenny worked hard for the score. This time they showed their refusal to ease off the throttle, English chasing a Carlow back-pass into the box.

Put under pressure Dowling rushed his kick, which rebounded off English. The ball fell in front of Grincell, who snapped up the chance, rounding the diving Dowling and then coolly adding the finishing touch.

The day got worse for Carlow, who were reduced to 10 when Brendan Fox was red carded for a stamp on Chris Whearty. Kilkenny’s response was to keep pushing on. Even though they were 5-2 up they never let up, with Andy Kavanagh and Paddy Cahill showed incredible doggedness in midfield. It was that desire which inspired the side until the final whistle.