Tullaroan back to winning ways 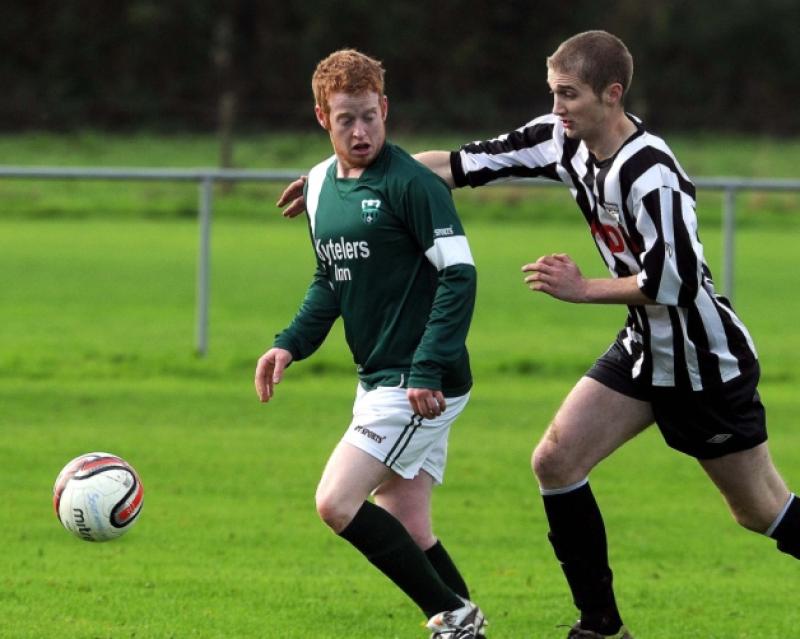 A storming second half performance saw Tullaroan finally earn their first league victory of the Division One season.

A storming second half performance saw Tullaroan finally earn their first league victory of the Division One season.

Ger Brennan’s 82nd minute strike, a beautifully cushioned side-foot volley at the back post after Brendan Burke dug out the cross, sealed an emphatic comeback for a side who had struggled to find winning form this campaign.

Life has not been good to the Division Two champions, who picked up just one point from their opening five games.

They looked to be in trouble again when, after just seven minutes, Southend took the lead.

Making light of the strong wind that blew across the pitch United used the elements to their advantage.

Joseph Gahan did the initial damage, whipping in a corner. Jamie Fennelly headed it back across the box to the waiting Brian Phelan, who had the simple task of finishing from close range.

Tullaroan might have been down, but they weren’t out. Padraig Crawford gave Eddie Walsh a scare when his 19th minute low cross skimmed the ’keeper’s hands.

They raised their game again a few minutes later, going close with the smartest attack of the game.

In a move that swept from front to back Joe Norton’s ball was worked on by David Walsh and Brendan Burke to Gerry O’Dea. His menacing cross was met perfectly by Ger Brennan, but Walsh did well to stop the header.

Persistence paid off for the hosts however, as they drew level just before the half hour. The fast-breaking Crawford was the provider, breaking down the right and drilling in a low cross.

There was an element of good fortune in the delivery, as Southend defender Jim Culleton tried to stop the cross but could only stab the ball away from his keeper, giving Brendan Burke a simple finish from close range.

Southend went back on the attack after that, but couldn’t find the decisive touch that would have restored their lead. Gahan tried his best to be that provider, drilling in two menacing crosses.

The first flashed across goal, just begging for a touch, while the second crashed into the side netting.

The second started with a bang for Tullaroan, who laid siege to the Southend goal but again they couldn’t find the final product.

Ger Brennan had the first go, racing on to Brendan Burke’s 51st minute flick-on but Eddie Walsh raced from his line to divert the shot over the bar. Burke was next to threaten, ending a powerful run with a wicked shot, but his effort hit the side netting.

Southend’s defensive strength helped them get through a sticky time and gradually, they forced the pressure back on the hosts.

Brian Phelan spread panic in the Tullaroan ranks when he fizzed in a low cross on 72 minutes, but his colleagues didn’t react in time. Joseph Gahan tried the same from the opposite flank, but his effort was just beyond Phelan’s outstretched foot.

The game of half-chances finally clicked into gear for Tullaroan after 81 minutes – and how. Getting possession from a quick throw-in, sub Danny Coogan lofted a peach of a cross into the box.

Fellow sub Tom Fitzgerald timed his run to perfection, connecting with a sweet strike that rocketed into the bottom left corner.

Victory was assured when Brennan added the third goal 60 seconds later. That strike capped a great day for the hosts, but Southend’s miserable morning would only get worse.

United had a chance to pull a goal back with an injury-time penalty, but Michael O’Sullivan’s effort was stopped by Jason Cahill, who dived to his left to stop the shot.