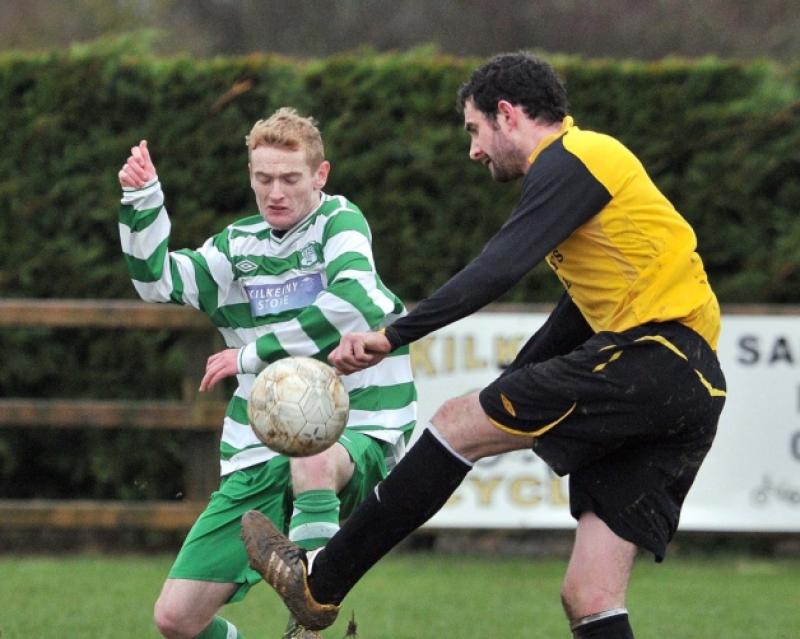 In the start of a New Year, but it was the same old story as Evergreen A continued on their winning ways in the Premier Division.

In the start of a New Year, but it was the same old story as Evergreen A continued on their winning ways in the Premier Division.

Inspired by David Grincell the reigning champions opened their 2014 account on the right foot, blasting past Fort Rangers in the only all-local game to survive the weather cull.

It was business as usual for the ’Greens, who marched to their sixth success in the top flight. However, it proved to be another bleak day for bottom-placed Fort, who are in the grips of a tough relegation battle.

Keen to make ground on leaders Freebooters A, Evergreen hit the ground running on a blustery Sunday morning. It took them just two minutes to make good on their attacking threat, carving Fort open with a deep attack.

Vinny O’Brien’s long raking ball from the left did the damage, giving Ciaran Snype the space to race through on goal. Given time to shoot he was denied by Jim Nugent, but Sean Barcoe was there to hook the rebound home.

The hosts smelled blood, but although they pushed forward with wave after wave of attacks they couldn’t make their pressure count.

Snype, who tormented the opposition at every turn, provided Barcoe with the chance to make it 2-0 on 16 minutes but the striker miscued his shot. Snype then had a go at the target himself, getting on the end of a sweeping move involving Tommy Earls, Damien Kelly and Niall Andrews, but his shot was straight at netminder Nugent.

Evergreen were getting closer and closer, but couldn’t find a second goal to secure their lead. Snype and Barcoe continued to create chances - Barcoe went closest when he latched on to Jamie Owens’s 23rd minute pass, but his effort flashed past the post.

The real difference between the sides was in how they moved the ball around the sticky pitch. Evergreen rattled off quick bursts of short, snappy passes, constantly keeping on the move as they stretched play across the field.

Fort seemed to rely on the direct route to goal, using the wind to try and catch Evergreen out with crossfield deliveries. The tactic failed to fluster their rivals, although they did get a chance when Eddie Nugent’s 25th minute free wasn’t cleared. David and Liam Forristal had follow-up shots - Fort’s first - but they didn’t trouble Pierce Dargan.

With Evergreen keeping their swift play and attacking presence alive their second goal finally arrived. Brian Jordan played a big role with a move down the right, before a swift one-two between David Grincell and Snype finished with Grincell rattling the net.

Jordan was involved in the next attack, and almost created another goal for the hosts. Finding space on the right he tormented the Rangers defence before squaring the ball for Jamie Owens. He cleverly lifted the ball over a sea of players, but Nugent scrambled to his right to push the ball to safety.

It wasn’t all one-way traffic, but with Rangers living off attacking scraps chances were few and far between. Emmet Nugent found space to shoot after the ball was worked his way, but his long range strike whistled past the post.

They may have survived that scare, but grabbing that second goal was like releasing a valve for Evergreen. With the pressure off them, they sprang forward and stretched their lead once more with 10 minutes left in the half.

Using a series of swift attacks and fast passes, ’Green prised Fort open. Damien Kelly and Ciaran Snype were involved in the build-up, with Sean Barcoe also playing his part before the ball fell to Grincell, who coolly finished low into the left corner.

Fort were down, but they weren’t out. Rangers showed their fighting spirit when, in the closing stages, Eddie Nugent’s long throw-in was flicked goalwards by Tony Moran.

For a split-second it looked like Rangers had found a goal, but Dargan made a good save to push the ball away for a corner.

Backed by a three-goal cushion Evergreen played the second half at a quieter pace, but they showed they could step it up whenever they wanted.

Ciaran Snype had the best chance to make it an even better day when he caused more mayhem in the Rangers defence.

Picking up possession and running at his man, Snype brushed past his marker and cheekily chipped the ball over netminder Jim Nugent, but his 65th minute shot finished outside the far post.

Evergreen made amends, and put the game to bed, 60 seconds later. Once again the link-up play between Grincell and Barcoe did the damage, the front two unlocking Fort with a swift one-two.

Shrugging off his man, Grincell moved into the box, waiting for Nugent to make his move before tucking the ball home for his hat-trick.

That was the blow that finally settled the tie, but Fort could have fallen even further behind. Ciaran Snype was within a whisker of getting the goal his performance deserved when he followed in after Grincell’s 70th minute shot came back off the post, but the winger couldn’t keep his strike on target.

Even after the fourth goal, Fort didn’t give up the fight. Pressing on they caused the hosts to blot their copybook late on, as some defensive slackness allowed David Forristal to nip in and win possession before taking the ball past the diving Pierce Dargan.

However, Evergreen did have the final say. They made sure they finished on a high, Dylan Whearty coming up from the back to get his head to Jamie Owens’s 90th minute corner and power it into the bottom left corner.