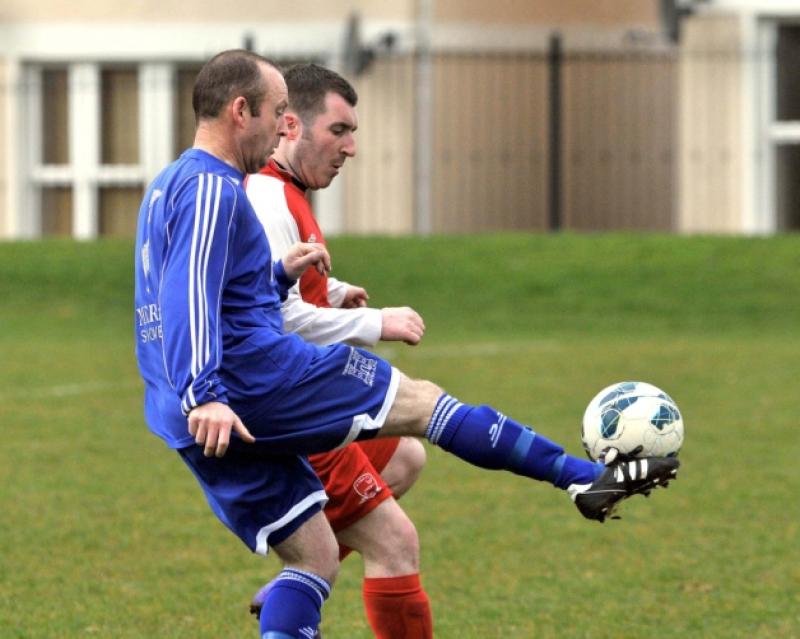 The old saying about the magic of the cup rang true as St John’s created their own special McCalmont moment on Sunday.

The old saying about the magic of the cup rang true as St John’s created their own special McCalmont moment on Sunday.

The city side battled hard and got their reward with a place in round two after beating Division Three rivals Thomastown United C in Garringreen.

It was a case of third time lucky for John Conroy’s side. Twice this year St John’s have played Thomastown in the league and twice they’ve lost to the team who currently reside at the top of the table.

The Saints got that chance to break that run with little over 20 minutes left - but only after getting a little rub of the green.

After plenty of chances but no goals, it was United who went within a whisker of edging ahead in a tight game when John Dempsey found room to squeeze in a teasing 70th minute cross from the right.

Paddy Kahn reacted quickest, racing to the corner of the six yard box and flicking the ball away from goalkeeper Dara Nelson, but his header clattered off the angle of the far post and crossbar.

That miss came back to haunt United - and how. Within 60 seconds, St John’s went on the counter-attack and went one up.

Breaking from the clearance, Jason Butler tore down the right flank and dug out a menacing cross. Martin Boki connected with the delivery, but saw his shot get blocked by a blue defensive wall.

Thomastown failed to clear the danger, however, giving Boki time to seize the ball again and steady himself before lashing a low shot inside the left post.

Grabbing that goal was like releasing a pressure valve for John’s, who had given their all to gain the upper hand in an entertaining contest.

John’s were quick off the mark when it came to making home advantage count. Almost from kick-off they went on the attack, Jason Butler and Martin Boki both trying their luck with long-range shots.

Thomastown weren’t shy when it came to attacking either. Shane O’Neill unlocked the John’s defence with a clever flick-on from Nigel Coady’s long clearance, sending John Dempsey racing away down the wing. Dempsey fired a dangerous low cross into the centre, but it was just beyond Johnny Maher’s outstretched foot.

John’s jumped back into attack after that, showing some muscle to split the United defence. After winning a bouncing ball Ryan Butler outmuscled his marker, teeing up Peter Nolan for a crack at goal.

It seemed certain that Nolan would score, but he lashed his 18th minute shot over the bar from close range.

Within seconds the game swung back down the other end of the pitch, as United went close with their brightest chance of the opening quarter.

Paddy Kahn was the architect, waiting for the right moment before threading a perfectly-weighted ball through the John’s defence for Dempsey. The midfielder timed his run well but couldn’t do the same with his shot, hitting the side netting when it looked like he’d score.

That little scare pushed St John’s back into offensive mode. Led by Jordan Conroy, Jason Butler and Martin Boki they pressed forward at every opportunity, but couldn’t make their chances count.

It didn’t help that they were facing a quality goalkeeper in Dylan Caulfield. He made a stunning save in the 35th minute, diving full stretch to his left to push out Conroy’s vicious long range strike which dipped and swerved towards the bottom corner of the United net.

The hosts continued to search for an opening goal in the second half, but seemed to have come up against a blue wall. United showed great composure in defence, moving the ball smartly around and seemed to have the measure of the Saints attack at every turn.

However, they couldn’t sharpen their own strike force to great effect. Paddy Kahn had the best the early second half opportunities, showing skill to take Johnny Maher’s 55th minute pass beyond his marker, but he opted for power more than placement, blasting his shot at ’keeper Nelson.

It took St John’s a little while to regain their attacking rhythm but, once they did, they showed plenty of enthusiasm. Peter Nolan could, and should, have given his side the lead just after the hour when he raced on to an excellent Jordan Conroy pass but he fired his shot over the bar.

Richie Falsey also had a crack at the target for the Saints when he was set up thanks to a crunching Conroy tackle, but his 62nd minute shot whistled over the bar.

Thomastown weren’t out of the game by any stretch, but couldn’t break the deadlock. Kahn had another chance when a neat one-two with John Dempsey left him with room to strike, but his 67th minute shot flashed across the target.

The misses proved costly, as John’s finally went in front.

Finishing strongly, St John’s made sure of their place in the next round with six minutes to play. The city side did well to keep the pressure on United after a Jordan Conroy corner was only half-cleared.

Once the ball was worked back out to him, Conroy set up the move that sealed the win. Whipping the ball back in, sub Paddy Rowe cleverly flicked play on to Ryan Butler, who controlled the ball before turning and drilling it home.