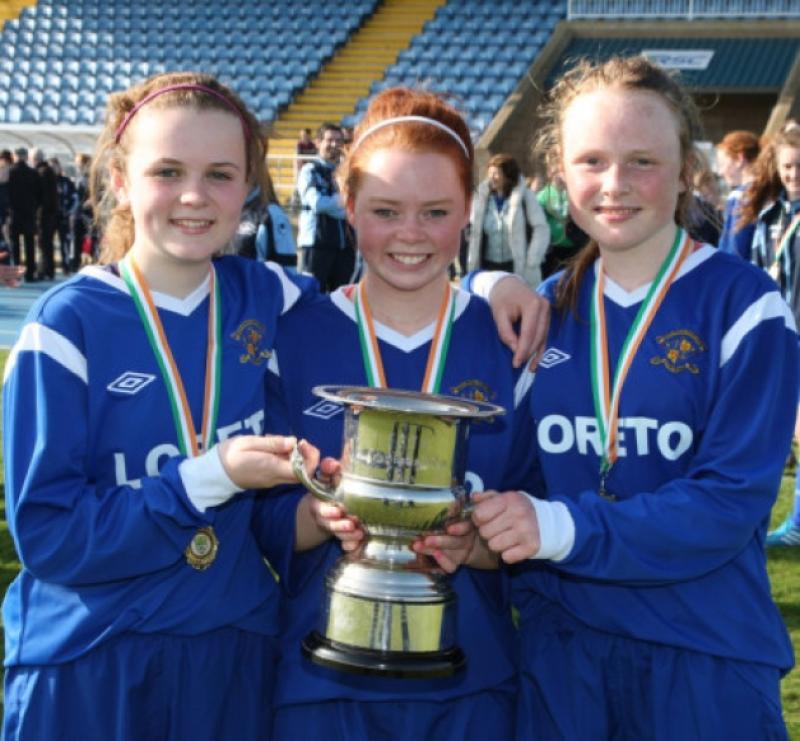 Queens of the local schools soccer scene, the Loreto are All-Ireland champions once again.

Queens of the local schools soccer scene, the Loreto are All-Ireland champions once again.

Led by Jenny Clifford the Kilkenny girls reigned surpreme on Wednesday, coming from behind to see off Presentation Thurles and retain their junior (under-17) All-Ireland title in Waterford.

A season after beating Moville CC to lift the title, the Kilkenny girls were coolness personified as they made a successful defence of their crown with an emphatic win over their Tipp opponents.

Few could argue with that sentiment, especially given the manner in which the Kilkenny girls stormed their way to the silverware.

The turning point was a two-goal blitz, rattled off inside five second half minutes.

The Loreto came out with all guns blazing after half-time, increasing the game’s intensity and forcing the Pres to play deeper than they would have liked.

A sustained spell of pressure, orchestrated by Laura Greene and Laura Murphy, proved key to turning the game the Loreto’s way.

The Pres though they had survived when, following a foul on Murphy, they blocked Kirsty Maher’s thumping 47th minute free but they failed to clear their lines. Fencing their rivals in, the Kilkenny girls were able to keep the ball in around the box.

When it spilled out left to Ria Lawson, they had their chance. Lawson did well to drill a low ball across the face of the six-yard box, her delivery inch-perfect for the inrushing Jenny Clifford to calmly sidefoot home.

If the Thurles girls were reeling after that goal, they were floored by the Loreto’s next act five minutes later.

Awarded a free inside her own half, captain Maher caught the Pres off-guard with a booming delivery. The kick sailed over the heads of the Tipp back four, dropping into a space that tempted Christine Coffey to leave her line.

The goalkeeper was quick - but Laura Murphy was quicker. Showing lightning-fast reflexes, Murphy seized control of the ball and took it round Coffey, pausing only to finish to the empty net.

That capped a remarkable turnaround for the Loreto, who had their feathers ruffled when the Tipp girls plundered an early opener.

The game was only six minutes old when the Hazel McAuliffe put pressure on a Sarah Kent clearance, sending the ball spinning out to the right flank.

Picking up play, Casey Hennessy dashed along the sideline and fired over a low cross. It seemed as if the Loreto had everything covered, but defensive hesitancy gave Grainne O’Mahony to bustle in and clip the ball home at the near post.

The goal was a setback, but the Loreto didn’t panic. The Kilkenny girls coped well with the threat posed by Sarah McKevitt and the pacy Shonagh Cleary. Laura Greene and Kent covered plenty of ground in midfield, while Ria Lawson and Jenny Clifford were a constant menace in attack.

Growing in confidence, the Cats created chances for Murphy and Greene in the opening quarter, but neither girl troubled Thurles netminder Christine Coffey. However, their persistance paid off when they hit a 19th minute leveller.

Sparked by Aine Fennelly’s long throw-in, the equaliser owed much to Clifford’s pace. Seizing the ball, she tore along the left touchline, controlling the ball and working a one-two with Ria Lawson before cutting into the box.

A goal chance was there for Clifford, despite the tight angle. However, rather than shoot, she unselfishly squared the ball back for the incoming Lawson to push inside Coffey’s left hand post.

The goal sparked a surge in the Loreto’s confidence, as they moved the ball around in impressive fashion.

They Kilkenny girls created the lion’s share of chances, not least from a Kent shot which squirmed through Coffey’s hands in the 33rd minute, but the netminder managed to regain control before it crossed the line.

The stalemate continued into the second half, but once they unleashed that quick one-two the Pres (who were hampered by the loss of midfielder Hazel McAuliffe before the break) were no match for a Loreto side, who grew only stronger with the introduction of Tara Clifford to the fray.

Even with the two-goal cushion the Loreto didn’t let up until the final whistle. With central defenders Olivia Nolan and Kirsty Maher pushing forward they began to put the squeeze on the Pres, forcing them on to the back-foot and limit their attacking chances.

The tributes were long and loud for the Kilkenny girls, with their coaches leading the way.

“It was a game of high standard with a number of candidates for Player of the Match,” said Loreto joint manager Paul McGinley. “There were no passengers on either team.”

It was a sentiment his fellow manager agreed with.

“These girls are a super team,” said Barry O’Neill. “A great bunch of players, they are fiercely determined and so loyal to each other.”

And the future is looking good for the Kilkenny side.

“Next year we will have teams at first year, under-15 and under-17 levels,” added O’Neill. “Most of the girls on this team will go on to represent the school at under-19 level, a first for the Loreto.

“Soccer has only been in the school for five years, but we’ll be very strong next season.”