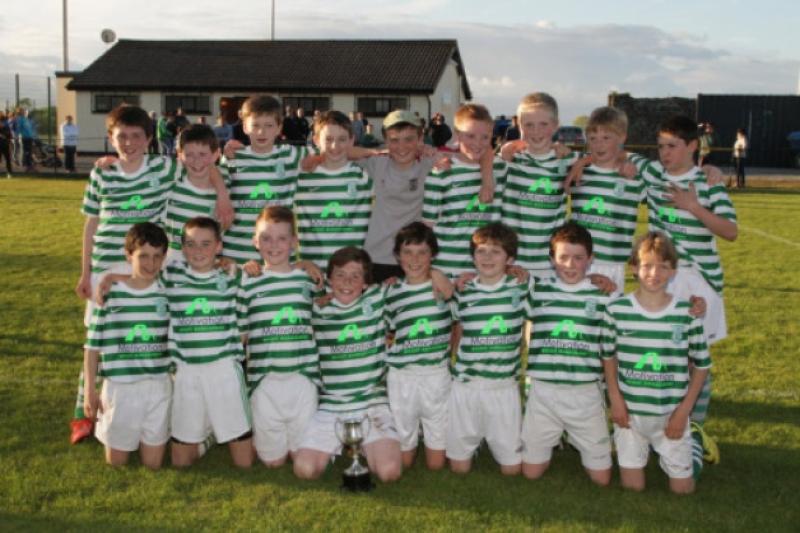 It was Monday Night Football in a different guise, but the performance was straight out of the top drawer.

It was Monday Night Football in a different guise, but the performance was straight out of the top drawer.

Evergreen A’s under-12s made it a doubly successful season as they added the Nicholas Marnell Cup to their Division One league title.

However, they were pushed all the way for the spoils at Derdimus on Monday by an equally impressive Newpark outfit who were also chasing a double after bagging the Division Two league crown.

Both sides went looking for an early goal but found the netminders tough to get past. Newpark’s ice-cool Sam Oyewole held John McNamara’s early looping shot, while Evergreen’s No 1 Vincent O’Grady calmly dealt with Kyle Leahy’s bouncing free and then caught a teasing Matty Zych cross.

It looked like the game would need something special to break the deadlock, and that’s just what happened after 24 minutes. Cian Franey found space to split the Newpark defence with a high ball. Mikey Clifford watched it drop over his right shoulder, then slammed a half-volley high into the net.

Evergreen held that lead until half-time, but had O’Grady to thank for staying in front. The netminder rescued his side in injury-time, staying big to block Seby Ruianu’s point-blank volley, then beat out the rebound.

Evergreen came out the blocks at full speed in the second half. They had a great chance to go 2-0 up within a matter of minutes, when Eoin Dalton connected with a ball from midfield, but Oyewole got down to palm the 33rd minute shot on to his left post.

There was little he could do to prevent Evergreen from doubling their lead six minutes later. Josh Dempsey was the provider, floating a free towards the back post where the unmarked Dalton was able to head home.

Down, but not out, Newpark raised their game. Pushing Fred Odera into a more advanced role, the defender used his pace to force Evergreen back. He had a great chance to pull a goal back after 47 minutes, going on a winding run down the left flank before cutting inside, but O’Grady got his body behind the shot to make the save.

Undeterred, Newpark kept looking for a way back into the decider. Jackson Oyo grazed the top of the crossbar with a searing drive on 51 minutes, while O’Grady had to look smart to stop Kyle Leahy’s shot 60 seconds later.

Their battling spirit was rewarded, and in some style, when Leahy drilled a 56th minute free-kick over the wall and into the Evergreen net. That made for an interesting finale, but Evergreen made sure the title was theirs in injury-time when Eoin Dalton’s brilliant back-heel sent McNamara charging through.

Keeping his cool the midfielder tore into the box, pausing only to fire the ball into the bottom left corner.