Evergreen stay in the title hunt 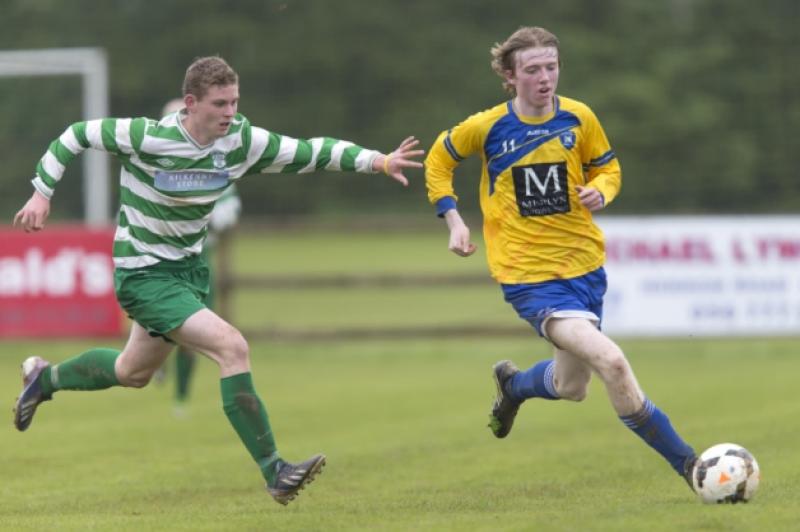 Evergreen A showed no signs of giving up their hunt for a fifth successive Premier Division title, but had to earn this win the hard way.

Evergreen A showed no signs of giving up their hunt for a fifth successive Premier Division title, but had to earn this win the hard way.

The city side got all three points in one of their final two catch-up games, leaving them three behind table-toppers Freebooters A, but Sunday’s game against Thomastown United A was far from easy.

While the scoreline suggests a softly-earned win for the hosts, it was anything but.

Although they had nothing to play for, Thomastown United A proved to be a stubborn opponent, turning Sunday’s game on the Kells Road into something of a battle.

Evergreen’s breakthrough came just at a time when United must have been thinking they had completed half their task. Moving into first half stoppage time, a tough game was balanced at 0-0 when Jamie Owens struck.

Pressing and pressing, Evergreen refused to let Thomastown clear their lines when Ben Hickey’s shot was blocked. Picking up play Sean Barcoe worked the ball back into the danger zone towards Owens, who kept his cool and clipped a low shot across the box and inside netminder Rory Leadbetter’s right post.

The goal was met with a sigh of relief from the hosts, who had fought hard for a breakthrough but up to then failed to make the final connection. Within two minutes of kick-off both David Grincell and Ben Hickey tested Leadbetter, the netminder also doing well to claw back Grincell’s fifth minute strike before it squirmed over the line.

Thomastown were far from quiet, and had some chances to make it a really troublesome morning. Derek Brennan got on the end of a well-worked move involving Paul Dempsey, Steven Connolly and Kelvyn Skehan, but his raking shot was dealt with by Pierce Dargan.

The visitors went closer again before the half hour, when Skehan got his head on a dangerous Peter O’Hanrahan cross, but his glancing header flashed wide of the mark.

Of the two goalkeepers Leadbetter was busier in the first half, looking lively to stop another Grincell effort with his feet, but he was powerless to prevent Owens from striking in stoppage time.

It was a different story after the restart as Evergreen quickly put their foot on the gas and never let go.

The new half was only five minutes old when Owens doubled his and Evergreen’s lead. Once more their persistence up top paid off, Grincell and Vinny O’Brien refusing to let Thomastown make an early clearance. Grincell’s quick pass released O’Brien down the endline, with a neat pull-back giving Owens time and space to fire home from the corner of the six-yard box.

With Thomastown tiring, Evergreen all but closed the game out with 54 minutes on the clock. Dylan Whearty was the provider with a peach of a low diagonal ball that split Thomastown open, but the finish was all Hickey. With one touch he spun the ball around his marker, with a quick shimmy taking him past the advancing Leadbetter before finishing to an empty net.

It was a bad day for United, who finished with 10 men after Leadbetter was dismissed for two yellow cards. Paul Dunne went between the posts, but could do little to prevent Mark Slater and Sean Barcoe from adding late goals to cement the win.