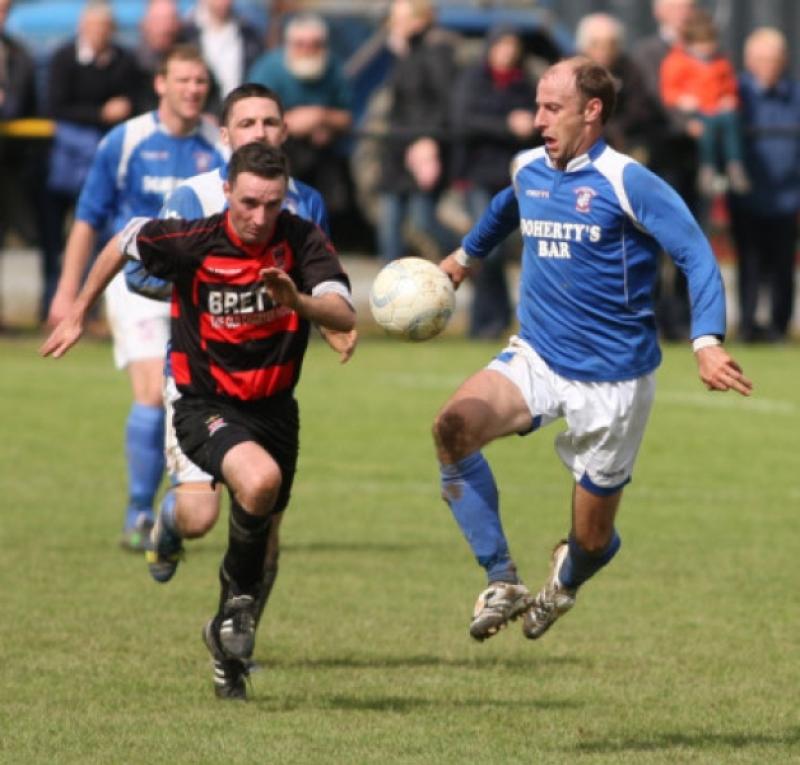 A swift one-two helped Freebooters A make sure that the McCalmont Cup was decorated in blue ribbons.

A swift one-two helped Freebooters A make sure that the McCalmont Cup was decorated in blue ribbons.

The city side pulled no punches as they rattled off a swift combination to KO Callan United’s hopes of claiming Kilkenny junior soccer’s top title for the second time in three seasons.

In a game which opened at a fast pace two moments of magic inside the first half hour all but saw Anthony Hanney’s side take the spoils.

Damien Raggett grabbed the first of that swift brace, putting a composed finish to a searing team move.

Breaking from his full-back role, Jack Poyntz broke into midfield to win a 24th minute tussle with Robbie Wall before moving the ball on to Dessie Hayes.

Picking up the low diagonal pass Hayes held play up until support arrived, flicking the ball on to the incoming Raggett.

A clever shimmy bought Raggett shooting room, but rather than blast a shot he coolly placed it inside Owen Wall’s right hand post.

Five minutes later Freebooters took a major step, albeit one with a fortuitous touch, towards the title. Once more Hayes was involved, winning a bustling ball before slipping it through for Aaron Molloy.

Using his pace, Molloy showed a great touch to control the ball at speed before firing a low shot at the target. Wall did well to get down and make a good save, but then disaster struck for Callan.

The shot rebounded back out, cannoning off the backtracking Lee Delaney and rolled into the net. It was a double blow from which Callan would never recover.

United, the Division One champions, showed no signs of being overawed as they took the game to their opponents from the off.

Within minutes of the kick-off Callan gave Freebooters their first test. Linking up smartly on the flank Simon Burke and Lee Delaney advanced down the right. Delaney found room to get a shot off, but Michael Lambert did well to get down and smother the danger at his near post.

It was a good sign of Callan’s attacking intent, but Freebooters showed that they could do the same - and more.

The game was only eight minutes old when the Blues drew first blood. Launching an attack from the left, James Kelly zipped a long ball down the flank for Dessie Hayes to come and collect.

Showing incredibly fast feet, Hayes took a touch and spun his marker, then looked up and picked his spot inside the far post with a confident strike that flew past Wall.

The Blues were bouncing thanks to that goal, but it took Callan just five minutes to burst their balloon.

The Blues thought they had dealt with the trouble when they turned a J.P. Corcoran free out for a corner, but worse was to follow. Corcoran met Simon Burke’s arrowed delivery with a diving header, but while the ball smacked off a defender Robbie Wall was on hand to prod home the rebound.

Stung into action, that goal saw Freebooters step up their efforts. James Kelly gave one such sign when he fired a swirling corner into a crowded box, but Wall did well to punch the ball clear while under pressure.

The netminder was busy again just a few minutes later. Stepping in from the left, Dessie Hayes dashed into a pocket of space and let fly with a searing shot, but Wall got down smartly to his left to make an excellent stop.

It wasn’t long before Callan posted a reply. There was a moment of panic when Lambert tried to punch a Burke corner clear and saw the ball spin back off his fist, but his defensive colleagues completed the clearance.

Burke had been limited in terms of attack thanks to the hard work of the Blues defence, but found space to give the Blues a little fright.

Watching the flight of Lee Delaney’s diagonal 20th minute pass, Burke killed the ball on his thigh and then fired off a strong shot, but it whistled past the outside of the left post.

Freebooters heeded those scares, hitting back with the two quick goals that put a different complexion on the game.

Brimming with confidence after the two goals, ’Booters surged on and hunted for more. Ger Hayes was denied by another Wall save, while Jack Poyntz break from the back to intercept a Callan ball ended with a long range shot, but again Wall was there to make the stop.

It was Callan’s turn to increase the pace in the second half. They started in determined fashion and almost pulled a goal back within seconds. Simon Burke went close with a 46th minute free that clipped the wall and looped over.

The ball took off, soaring towards the back of the net, but the rapidly back-pedalling Michael Lambert reached back and palmed Burke’s shot over the bar.

Freebooters hit back with a good effort of their own. Showing his attacking presence James Kelly threw the ball to Aaron Molloy and then ran on to the return pass. Breaking swiftly, Kelly tore into the box and made space to shoot, but Wall stayed big to deny the Blues skipper.

Time was going against Callan, but they raised their game accordingly. J.P. Corcoran glanced a teasing header wide from another Simon Burke corner in the 55th minute.

Pressing on, United had another crack just a few minutes later. Seizing on a stray touch Ryan Bergin dashed forward. Showing a neat turn Bergin moved into the box, but blasted his shot over the bar.

For all their efforts Callan couldn’t close the gap on Freebooters. The Blues rode out the storm then began to take control before squeezing the life out of the contest working the ball around to wear their opponents down.

The city side showed a little more threat in the last half hour. Ger Hayes went closest to notching a fourth goal when he raced on to a Raggett pass and let fly from close range, but his shot struck the base of the post.

Good as Freebooters were in attack, they impressed more in their defensive play. Geoffrey Brennan worked hard in the centre of midfield, assisted by Paddy Cahill.

Behind them defenders Julian O’Keeffe and David Rice got the upper hand on their rivals, forcing Callan to take a step back and search for gaps.

If the two-goal gap was hard to bridge, Callan had no way back once ’Booters made it 4-1 in the closing stages.

Awarded a penalty after his cross was handled, Raggett sealed a great day for his side with an emphatic spot-kick to start the celebrations.