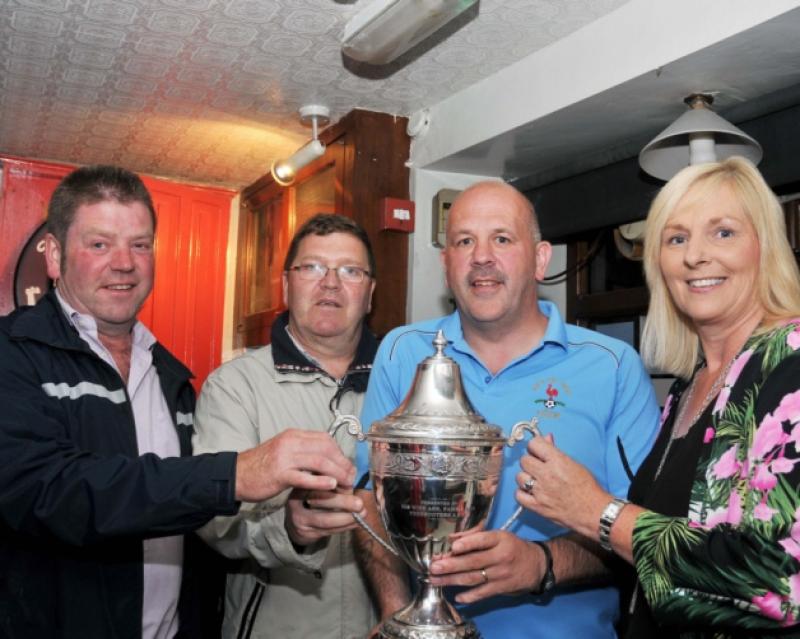 The Mock Lawlor Memorial Cup will stay in Wexford after North End United staged a brilliant comeback to hold on to the silverware.

The Mock Lawlor Memorial Cup will stay in Wexford after North End United staged a brilliant comeback to hold on to the silverware.

The Sky Blues joined competition hosts Freebooters as two-time winners of the preseason tournament, but only after it looked like they might relinquish their title to a fast-moving Carrick United.

The Wexfordmen had Andy Moore to thank for changing their fortunes, as his two-goal haul in the first half went a long way towards settling an entertaining game that lit up the Fair Green on a gloomy Saturday evening.

North End had been a little slow to start, but a quick one-two pushed the Cup their way. Moore did the damage in a 12-minute spell before the break, his first goal arriving after the half hour, when he arrived at the back post to turn Paul Murphy’s corner into a looping header that sailed over the grasp of netminder Daryl Whitty.

The goal was a little against the run of play; up to that stage Carrick had looked impressive in defence, central pairing James Walsh and Stephen Kerwick leading the way with a composed performance.

However, Carrick were all at sea for Moore’s second, which arrived in the dying seconds of the half. Driving up the right flank, Jason Murphy drew practically all of the Carrick defence towards him before delivering a high ball over the last defender and towards the back of the box.

Carrick had failed to pick up the incoming Moore, who had time to cushion his header beyond Whitty’s reach and push his side into a lead they wouldn’t lose.

The goals were a double whammy for Carrick, who had started the game in blistering pace and looked to be well in control in the early stages. A confident side, they proved as much when they took an early lead with a stunning strike.

Awarded a free-kick out on the right after Barry Walsh was upended close to the sideline, Adam McSherry stepped up and walloped a long range diagonal strike that flew past ’keeper Dylan Owens and crashed into the net off the far post.

The Waterford League side fully deserved that goal, which came in the middle of a dominant spell. Carrick showed great skill and speed as they worked the ball around, driving at North End and pressing them back into their own half.

The Wexford side were no slouches either. Once they found their feet on the slick surface they too moved the ball with pace, much of their attacking coming from the right.

Those two Moore goals swung the game North End’s way, but they had Robin Dempsey to thank for going in with a half-time lead. Cut open by Stephen Kerwick’s zippy low ball, Glen Keane did well to draw Dylan Owens off his line and chip him from an acute angle, but defender Dempsey got back to hook the ball to safety.

Carrick were intent on making a fast start to the second half, but their charge stalled within six minutes of the restart.

Played onside by Kyle Dempsey’s diagonal ball, Jason Murphy cut in from the left and unselfishly squared the ball to Shane Dempsey, who composed himself before picking his spot in the net.

That goal wasn’t the end of the action, but did for Carrick’s victory hopes. They did press for a way back into the game, pushing North End back and enjoying large spells of possession, but the Sky Blues were content to keep things tight at the back.

North End did finish with a flourish, however. Shane Dempsey went within a whisker of grabbing his second goal when he connected with Jason Murphy’s 80th minute cross (another part of a great move involving Lee Walker and Kyle Dempsey), but his shot flashed wide of the post.

North End wouldn’t be denied a fourth goal though, and sealed a stylish win seven minutes from time. Gambling on a long kick-out, Lee Aust got his reward when he controlled the ball on the left, then chipped it over the advancing Whitty to complete an impressive win.