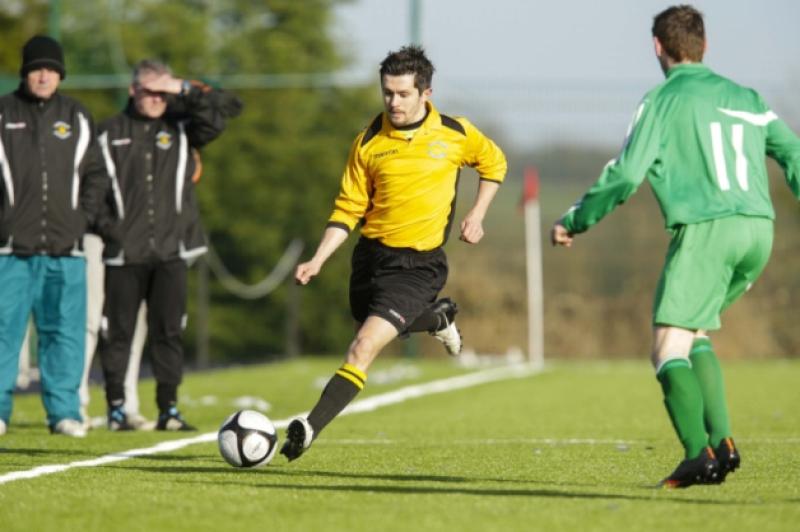 They’ve been an incredible attacking force throughout the Oscar Traynor campaign - but the Kilkenny & District League displayed real defensive steel on Sunday.

They’ve been an incredible attacking force throughout the Oscar Traynor campaign - but the Kilkenny & District League displayed real defensive steel on Sunday.

Ollie Walsh’s side marched on to the quarter-finals (and a Friday the 13th meeting away to Limerick) thanks to what could only be described as the complete team performance against the North East League in Navan.

While goals from David Rice and Ben Ryan helped win the game, every member of the Kilkenny squad had a big part to play in the success.

A composed performance over the 90 minutes, including large spells where they were under intense pressure, saw the visitors frustrate and contain their hosts and surge into the last eight.

On the face of it, the game in Navan threw up so many potential pitfalls for the Cats - a trip through a snowstorm, taking on an unknown quantity with some players missing and a match on an artificial pitch - but they passed every test posed of them with flying colours.

The North East League forced several quick corners in the opening five minutes, a move that they felt would set the tone for the remainder of the game.

Instead, they were left open-mouthed as, once they broke free, Kilkenny took the lead with their first attack!

Skipper David Grincell led the charge, forcing a corner after Kilkenny had worked their way upfield. Michael O’Neill’s curled in a peach of a delivery, his ball picking out the incoming David Rice.

The Freebooters defender marked his Oscar Traynor debut in style, ghosting into the box before connecting with a powerful header. Robert Arthur got his left hand to it, but couldn’t stop the ball finding the back of his net.

The goal rocked the hosts, who suddenly saw the scale of the task set before them. They raised a reply soon after, Robert Coomes teeing up Trevor Molloy for a crack at the target from Conor Walsh’s quickly-taken free, but he scuffed his tenth minute shot well wide of the mark.

While the North East had an ‘in your face’ attitude from the off, Kilkenny showed no fear. Their defence was resolute throughout - in front of them Paddy Cahill had a game to remember, as his calmly mopped up play and broke down any Meath attack that came his way.

It was Cahill’s involvement which almost saw Kilkenny double their lead five minutes later. Getting up highest to win an aerial battle with Molloy his header was picked up by Grincell on the right.

Linking up well with Newpark club-mate Ben Ryan the duo played a series of fast passes which ended with a clever through ball for O’Neill, but a last-ditch defensive tackle nicked the ball away before he could strike.

The danger wasn’t over, however. Eoghan Vaughan (another who impressed with his non-stop running and hard work) won back possession and turned for goal, but his shot was cleared to safety.

While the pace of the all-weather pitch might have been the undoing of some teams, it only served to strengthen Kilkenny. Their speed of thought and swift passing meant they were a real force to be reckoned with, something they showed all day.

Their next lightning-fast attack almost yielded what would have been a deserved - and impressive - second goal with 19 minutes on the clock.

Nipping in to rob possession, Andy Kavanagh picked Stephen Grimes’s pocket and, in a flash, unleashed a clever diagonal ball to the left.

Vaughan was on it in a flash, skipping inside a challenge from Shaun Doyle as he broke for the box. In an unselfish move he rolled the ball to his right, where the onrushing Kavanagh met it first-time, but he hammered his shot to the right and wide.

The miss mattered little as, within minutes, the Cats had their two-goal cushion.

Again, it was through the involvement of their captain that the visitors cracked the North East’s resolve. Breaking into the box along the byline, Grincell’s swift attack was ended abruptly by a hefty challenge.

Referee Joe Dyas signalled for a kick-out but was called across by his assistant, who signalled that Grincell had been fouled - penalty!

There was some confusion over the awarding of the spot-kick, which led to a delay.

That didn’t ruffle Ben Ryan’s feathers. He was coolness personified as he waited for the drama to die down, then expertly sent Arthur the wrong way from 12 yards.

The goals were a sign of Kilkenny’s quality in that first quarter, but they blotted their copybook when they allowed the hosts to get right back into the game.

Within seconds of going two down, the North East poured forward from the kick-off and hit Kilkenny on the break.

The visitors failed to deal with a ball in on top of their defence, or the resulting cross from Molloy on the right, and paid the price when Barry Kavanagh’s shot took a wicked deflection off a defender and spun past the wrong-footed Robbie Lynch.

The goal was a shot in the arm for the North East, but try as they might they couldn’t find another. Conor Walsh tried to pick out Kavanagh with a cross to the back post, but Lynch did well to reach high and claw the ball back into his grasp.

They had another go when Gary Clarke stole in off the shoulder of Tommy Earls and got on the end of a Kavanagh cross, but the defender did enough to prevent his man from getting a clean header.

The second half started with Kilkenny very much on the front-foot. Quick off the mark, they made the first chance when Michael O’Neill threaded a great through ball for David Grincell, but a defensive touch saw the North East nick the ball away before the Kilkenny captain could strike.

The visitors kept their attacking momentum in full flow, bombing forward with great energy. The introduction of Henry O’Neill added pace to the top three, as they continued to peg the North East back.

O’Neill quickly made his presence felt, playing his part in a solid Kilkenny chance.

Set free by David Grincell’s clever back-heel flick, O’Neill dashed down the left before pulling the ball back. Eoghan Vaughan was his target, but a defender got back in time to make a vital block.

The hosts found it hard to cope with Kilkenny, and were thankful to the frame of the goal for saving their skins on the hour.Seizing control of the ball on the left, Grincell danced his way in from the wing and let fly with a stinging shot.

Netminder Robert Arthur was rooted to the spot, but was grateful to see the ball cannon off the base of his right hand post and go wide.

Kilkenny tried to extend their lead - Grincell had a goal ruled out for offside, while Paddy Cahill clipped a 67th minute volley over the bar - but with just one goal between the sides the North East began to throw caution to the wind.

The hosts spurned a great chance to draw level 11 minutes from time when Mark Leavy found space to dig out a cross from the right.

Paddy O’Boyle stole in on the blind side of his marker and met the ball squarely - but his header was straight at Robbie Lynch.

Kilkenny took that as a sign to push forward again. They had a chance to make the game safe when, four minutes from time, Grincell released O’Neill with a perfectly-weighted pass.

The sub sped through, skipping inside a challenge from his marker, but he lashed his strike over the bar when he seemed certain to score.

It was a let-off the Meath outfit appreciated, but try as they might they couldn’t make it count. Kilkenny kept things tight at the back and refused to give their opponents room to move.

However, there was one final scare for the Cats to endure. Deep into stoppage time Lynch was penalised for holding on to the ball too long.

Paddy O’Boyle went for broke from the close-range free, but Jack Poyntz stopped his shot. O’Boyle tried to follow up on the rebound, but Kilkenny’s defensive excellence saw them clear the danger and secure a great win.

Kilkenny’s success in the second round of the Oscar Traynor means there’ll be a delay in handing out the first piece of silverware in the Kilkenny & District League.

With Limerick the destination on Friday, March 13 - the game will kick-off at 8pm under the Jackman Park lights - the date has been changed for the Maher Shield final between Thomastown United A and Evergreen A.

The game was due to be held on Sunday, March 15, but with several players involved in Oscar Traynor action less than 48 hours earlier the Shield final has been put back until later in the month. It is expected to be played on Saturday, March 28.

The dates of the Youths and Women’s Shield finals remain the same. Freebooters will play Callan United in the Henderson Youths’ Shield on Saturday, March 14.

The Women’s Shield final between Tullaroan and Freebooters kicks off at 4pm on St Patrick’s Day.