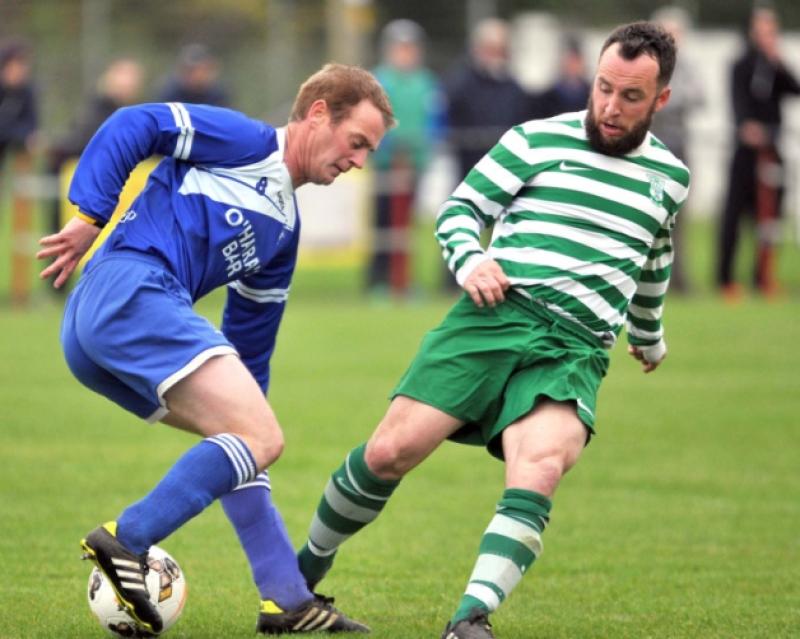 An impressive performance, sprinkled with some incredible goals, was enough to propel Evergreen A into the McCalmont Cup final.

An impressive performance, sprinkled with some incredible goals, was enough to propel Evergreen A into the McCalmont Cup final.

The Maher Shield champs kept themselves in the hunt for another trophy, setting up a May 24 meeting with either Newpark A or Freebooters A, while also dashing the double hopes of league winners Thomastown United A.

It was a day which almost perfect for the Kells Road side. They flooded the midfield, snuffing out Thomastown’s dangerous engine room, while also putting their rivals under intense pressure when they needed to.

It helped, of course, that they had some expert finishers, none better than Chris Whearty. The first of his brace brought Evergreen back into the game at the right time, while the second was the icing on the cake.

The turning point in the game came in a whirlwind 60-second spell just after the hour. After putting the squeeze on United, something they did from the start of the second half, Evergreen’s hard work paid off. Damien Kelly was the provider, driving in a free-kick sited on the left touchline, close to the half-way mark.

The ball was an inviting one, but the finish was something else. Sean Barcoe showed great hunger, towering over Thomastown’s defence to meet the delivery with a powerful header that screamed into the top left corner of Rory Leadbetter’s net.

Now a goal down, Thomastown’s task to get back into the game became an uphill one when Steven Connolly was red carded for an off the ball incident with Robbie Quan. Their afternoon was rapidly unravelling.

The game didn’t start out that way for United. Playing with the swagger of league champions, even they must have been surprised at the way they caught Evergreen cold from the kick-off.

The players were only getting into position when Paul Dempsey whipped a teasing ball up the left wing. Gambling on the bounce, Steven Connolly split the defence and ran on, pausing only to look up and flick the ball over the advancing Packie Holden.

The game was only ten seconds old - Thomastown were in dreamland!

Fired up by that goal, United almost added a swift second. Getting on the end of Mick O’Neill’s excellent sixth minute cross Dessie Walsh headed the ball into Connolly’s path. The striker instinctively got his knee to the ball, deflecting it goalwards, but Holden reacted well to make the save.

The city side settled into the game after that, with their top two of Darragh Walshe and Brian Jordan leading the way. The duo were a real handful when pitted against Derek Brennan and C.J. Browne, battling for every high ball and making nuisances of themselves in a physical duel.

While Walshe went close with a fizzing eighth minute snapshot, Jordan did even better soon after. It looked like Thomastown had survived when they blocked a Jamie Owens shot, but the rebound fell to Jordan. Keeping cool, he got the ball out from under his feet and then slipped a low shot inside the left post.

The goal gave an added boost to Evergreen’s charge. They thought they had another to celebrate when Walshe hit the net in the 19th minute, but the strike was ruled out as he was adjudged to have controlled Tommy Earls’ great cross with his hand before pulling the trigger.

That let-off sparked Thomastown back into action. Within five minutes, they were back in front. Sent on his way by a great 25th minute ball from Eamon Lyster, and an untimely defensive slip, Mick O’Neill was given a route into the box but his run was halted when Dylan Whearty tripped him in the box.

Awarded the spot kick, O’Neill showed no nerves from 12 yards. Holden got his hand to the ball, but couldn’t prevent it from spinning into the centre of the net.

The game continued in its full-tilt battle mode after that, with both sides really having a go, but as half-time loomed it looked like United would go in a goal to the good.

That all changed in stoppage time, however. Awarded a free after Walshe was fouled on the left corner of the box, Chris Whearty punished Thomastown when he curled the ball round the right side of the wall and inside the far right post.

The goal was a real shot in the arm for Evergreen, as their second half performance proved. Their five-man midfield put the squeeze on Thomastown, silencing the likes of Andy Kavanagh and Eamon Lyster and knocking them out of their rhythm. The quick one-two of the Sean Barcoe goal and Steven Connolly dismissal also really hurt United’s hopes.

Forced to alter their game, Thomastown tried to back. Given time to pick out a cross Mick O’Neill delivered an inch-perfect ball for Andy Kavanagh to latch on to on the left, but he drove his 77th minute shot straight at the grateful Holden.

That was Thomastown’s best chance of forcing their way back into the game, but they weren’t finished. Mick O’Neill had appeals for a handball turned down when he lashed an 86th minute shot into a packed box. C.J. Browne almost rescued the Town seconds later, when he ghosted in around the back to get on the end of Derek Brennan’s great cross, but he couldn’t keep his header on target.

Thomastown continued their push for an equaliser deep into stoppage time, but one last attack finally quenched their hopes. Urging his team-mates forward, Rory Leadbetter came well out of the box to pump one last ball into the danger zone. Evergreen were quickest to react, heading it forward towards Chris Whearty.

He could have wasted time and waited for the whistle, but spotting Leadbetter off his line Whearty went for it from half-way. He got his reward, lobbing the stranded ’keeper to wrap up that final berth in style.