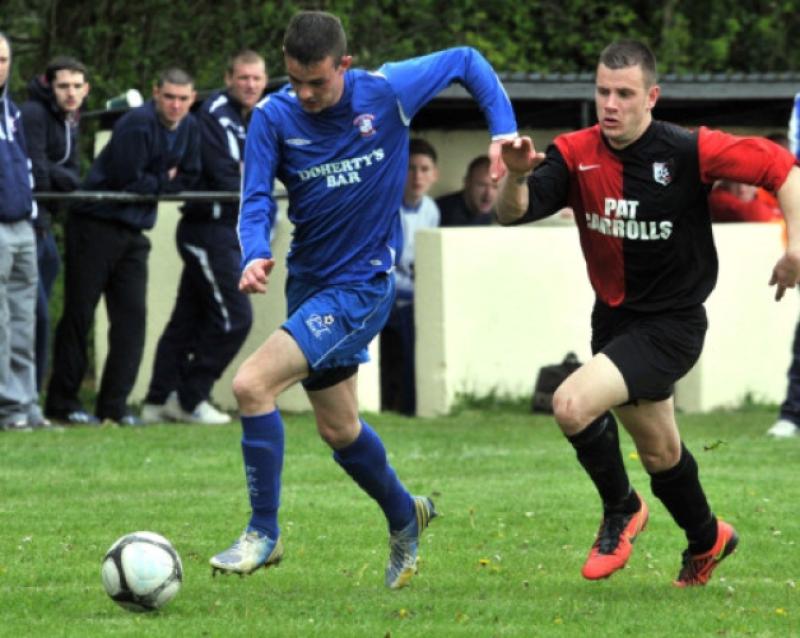 NEWPARK went a long way towards banishing the memory of last season’s McCalmont Cup loss but they had to go the distance to get the better of Freebooters A.

The city derby was tense and tight and for long spells looked as if it could go either way. As it happened Newpark, who lost to Callan on penalties in last year’s decider, held their nerve when it mattered most.

Top of the pile was goalkeeper John Dumecz. A stand-in for the last few weeks in place of Bobby Maher, the defender turned netminder saved two kicks and scored one as Mark Ryan’s men kept their hopes of a treble-winning season very much alive.

Dumecz gave Newpark a great start to the penalty shoot-out, getting down well to stop Paddy Cahill’s opening kick. In sudden death he kept his nerve to hammer in Newpark’s eighth kick of the day (that made it 7-7!) and then saved again in the 11th round to hand the advantage to his side.

Newpark were full of running in the early stages, so it was no surprise to see them turn that into a quick goal. The game was only 15 minutes old when Henry and Shane O’Neill broke down the right flank, the latter whipping in a cross for Tony Delaney to power home past a static Blues defence.

The Division One champions were fully intent on building on their lead and went close to achieving just that a few minutes later. Ray Meagher broke from the back and seemed poised to strike when Tommy Comerford’s 22nd minute ball bounced favourably into his path, but Ger Hayes made a vital tackle to deny his rival.

That save proved to be more valuable than Freebooters realised as, within five minutes, they had forced an equaliser. Picking up play inside Newpark’s half, Michael Comerford was given too much time and space on the ball. He punished Newpark accordingly, floating in a cross for Greg Morton, who ghosted in to bravely head past John Dumecz, the striker taking a hefty knock for his troubles.

’Booters kept their pace going, pushing hard to build on the momentum created by Morton’s goal. Paddy Cahill sent them on their next attack, picking up a loose ball and setting off on a searing run towards the Newpark box. Breaking forward, Cahill sent play on to Morton, who teed up the inrushing Aaron Molloy to strike but Dumecz made an excellent saw, getting down smartly to his right to prevent the raking shot from finding the corner of his net.

The pressure was beginning to tell on Newpark, however, who leaked a second goal at the worst possible time. The first half was in stoppage time when the Blues poured forward in attack, sparked by Jamie Lynch’s excellent pass. Waiting on the edge of the box Ger Hayes took the ball down and, after Newpark failed to clear it, drilled home a crisp low shot that flashed past the helpless Dumecz.

Newpark might have been down, but they certainly weren’t out. They showed their intentions right from the start of the second half, John Hayes almost catching former colleague Donal Brennan out when he tried his luck from the kick-off, but the goalkeeper reacted in time to tip the ball out for a corner.

That was the signal that Newpark would give everything in the search for a second goal. As it happened, they didn’t have too long to wait. The all-important leveller duly arrived within two minutes of the restart, Ray Meagher taking down Sean Falsey’s corner at the back post before deftly lobbing it into the top left corner of the Blues net.

The sides pressed hard for a winner after that, but although both went close neither could make their efforts count. Dessie Hayes had Freebooters’ best effort, teeing up a Ger Hayes cross for himself before rolling the defender and unleashing a dangerous shot, but his 79th minute effort flashed across the goalmouth.

Newpark went even closer, and but for a fine Donal Brennan save could have settled the tie in normal time. Henry O’Neill went within a whisker of sending his side into the final when he curled a menacing 85th minute free-kick round the ’Booters wall and towards the inside of the post but the netminder got down to turn the ball out for a corner.

There was little to separate the sides when it came to spot-kicks either. After Dumecz saved Paddy Cahill’s first kick Newpark held that advantage until the last of the regulation penalties, Brennan guessing right to keep out Dean Woods’ effort.

Parity continued into sudden death, although Jack Deegan’s kick just got past the outstretched foot of Dumecz while Brennan got his hand to Tommy Donovan’s penalty but couldn’t keep it out.

The game went to an 11th round of penalties when Newpark gained the upper hand again, Dumecz getting down to his right to stop opposite netminder Brennan’s penalty.

The pressure was on Shane O’Neill now but he made it count, beating Brennan to send Newpark back into the final for the second year in a row.