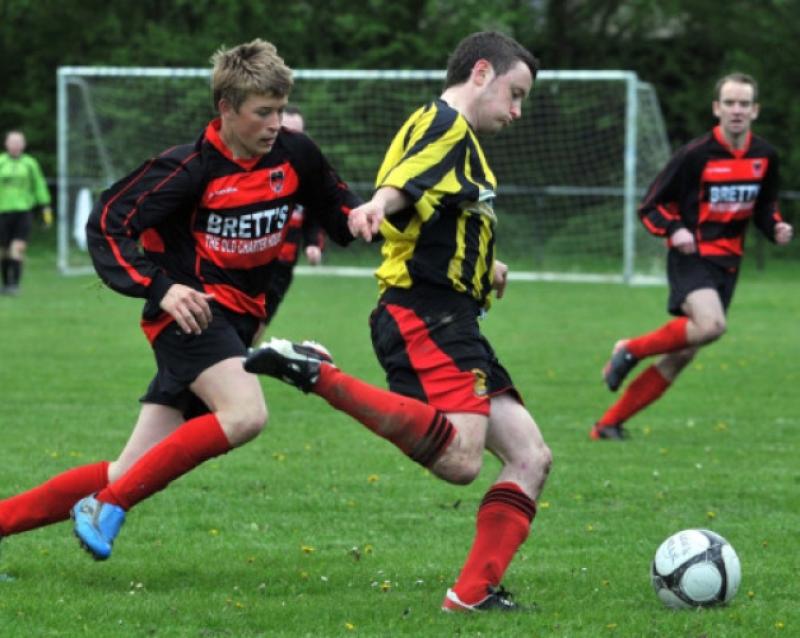 IT SEEMS that the magic of the Cup isn’t something limited to Wembley.

Brookville created their own piece of history at the weekend, shocking holders Callan United to reach the McCalmont Cup final for the first time.

In an absorbing contest, the Ballyragget side showed incredible powers of recovery, coming from a goal down twice to stun the title holders and earn their second cup upset in succession.

A week on from their disposal of top flight Fort Rangers, the Division Two outfit were at it again in Derdimus on Sunday morning. At one stage they looked in danger of being over-run by Callan but, inspired by the strong running of John Doheny, Brookville staged an incredible comeback.

In a topsy-turvy game (Brookville bounced back from a goal down to take the lead in three second half minutes, then lost it on the hour) the underdogs took a decisive step towards the final 16 minutes from time.

The all-important strike came when J.J. O’Sullivan’s booming kick-out was flicked on towards the Callan box. Stephen Ruth saw his chance and went for it, chasing a long ball and taking it inside the challenge of Alan Costigan.

Keeping possession, Ruth took the ball across the box but was upended after getting in a tangle with goalkeeper Eoin Wall.

There was a double blow for Callan - as well as conceding the penalty, Wall was red-carded for his troubles. John J. Egan went into goal for the spot kick but had no chance, Gary Hogan firing his shot high into the top right corner.

The goal was just another point in what proved to be a keenly fought semi-final. Despite the early kick-off both sides went for it from the off, going close with some dangerous efforts. Robbie Wall had the first chance, sending a long range shot from the left whistling into the side netting after just four minutes.

Wall was at it again 11 minutes later, this time sending in a teasing free-kick which J.J. O’Sullivan was forced to palm away for a corner. Joey Byrne floated that in from the right, but Cathal Byrne’s flicked header was wide of the mark.

Brookville had been under the cosh in the opening stages, but it wasn’t all one-way traffic. John Doheny gave Callan a little fright when he fizzed a dangerous free-kick over the wall, but Eoin Wall got his finger-tips to the ball to turn it over.

Callan went back on the hunt, taking the lead just after the half hour.

When the goal arrived, it proved to be worth waiting for. Robbie O’Brien carved Brookville open with a neat ball from the centre of midfield for Simon Burke to race on to. The striker jinked inside his marker, then showed even better footwork to cut back inside the advancing O’Sullivan and slot the ball into the far corner.

Good as that goal was, Brookville bettered it within 60 seconds. Latching on to a loose ball, John Doheny let fly with a 30-yard screamer. The midfielder’s shot barely rose six inches off the ground but was a real thumper, finding the inside of Wall’s right hand post.

Brookville were full value for their equaliser, but Callan struck back to take the lead at the ideal time. There were just seconds left in the first half when the champions took control again, this time from a corner. Joey Byrne’s delivery was a belter, John Mark Egan timing his run to glance his header home.

Callan’s hopes would have been to build on that lead in the second half. As it happened, their advantage lasted just four minutes.

Brookville went within a whisker of levelling when Alan Ruth’s looping shot was finger-tipped over by Eoin Wall, but they got their reward after Jonny Kavanagh’s corner came off the hand of Robbie O’Brien in the box.

The pressure was on Gary Hogan from the spot-kick but he made it look effortless, coolly sending Wall the wrong way to level matters.

Brookville were full of confidence, but even they must have been surprised at what happened next. In one of the moves of the game Shane Phelan won the resulting kick-off and knocked an angled pass down the left for Hogan to chase. The winger heard the call from Doheny and centred a low ball back for his colleague, who ran on and struck a first-time shot high into the left of the net.

The drama wasn’t over yet though. Although shell-shocked, Callan regrouped and levelled a crazy game by the 66th minute. Eoin Wall scored it, coming from his own goal to fire home a penalty after Robbie Wall had been tripped in the box.

The game was delicately poised at that stage - but Brookville were just minutes away from a final flourish to complete an incredible morning.