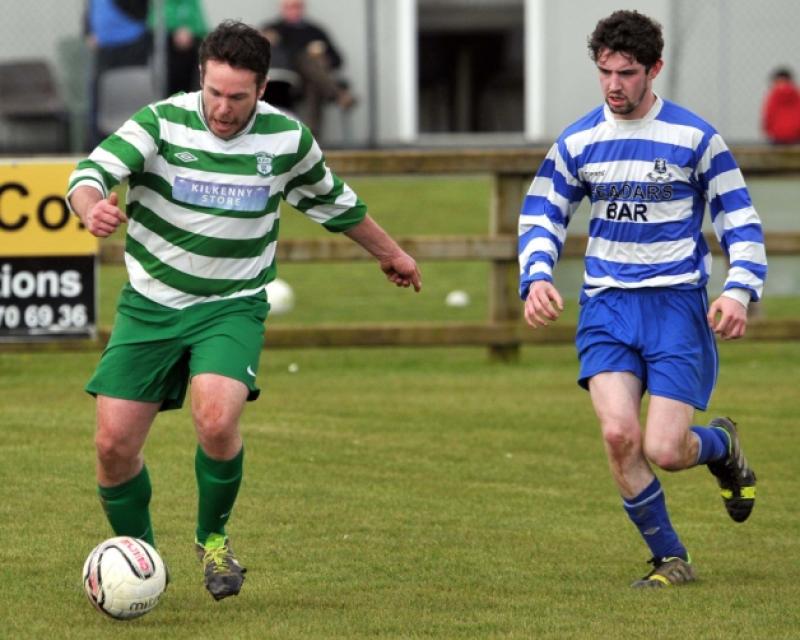 The drive for the Premier Division title is still in top gear for Evergreen A, but the quest to stay in the top flight has left the Lions stuck in neutral.

The drive for the Premier Division title is still in top gear for Evergreen A, but the quest to stay in the top flight has left the Lions stuck in neutral.

The Durrow men travelled to the Kells Road on Sunday morning knowing that, at the very least, a point was needed to avoid relegation.

They didn’t get it, suffering a protracted defeat that has left them facing the uncertainty of a relegation playoff.

As for Evergreen, the quest to complete their fab five haul remained in their hands, but Sunday’s performance owed as much to their patience as it did some clinical finishing.

You could almost hear the sigh of relief from those in green and white when Ciaran Snype picked up a ball in the Lions half and slalomed past several tackles before confidently tucking the ball across netminder John Finnegan and inside the far right post.

That 79th minute goal doubled Evergreen’s lead, enough to all but seal the points and kill off the visitors, who had been dogged throughout.

Playing catch-up on the league leaders Freebooters A, Evergreen were determined to win their games in hand and force a late season joust with their old foes.

Having beaten Fort Rangers 7-1 in their midweek meeting, the ’Green looked to continue their goal burst on Sunday - and quickly. Sean Barcoe went close after just three minutes, snapping off an instinctive low shot that zipped through a sea of legs and crashed off the post.

Barcoe turned provider soon after, dashing along the endline before pulling a low ball across the box. David Grincell seemed certain to pounce, but Michael Freeman slid in to make a vital interception.

Much of the early pressure was Evergreen’s, but the Lions weren’t slow to show their attacking teeth. In a flowing move on the right Danny Lennon and Ben Wallace created space for Michael Dooley to whip in a cross. Lee Campion was there first, but couldn’t make a clean connection with his volley, sending the ball spinning wide.

Evergreen increased the tempo after that scare, pressing on in search of the opening goal. They thought they’d found it in the 37th minute, when Chris Whearty fizzed in a fierce strike from a quick Jamie Owens corner. The shot screamed towards the net, but Danny Lennon was there to clear the danger at the back post.

The pressure was beginning to tell, but the Lions finally cracked with 60 seconds of normal time left in the half. Once Campion lost possession in midfield Barcoe pounced, teeing up David Grincell to cut in from the left and lash a powerful shot past Finnegan into the top left corner.

Evergreen tried hard to double their lead on the restart, but couldn’t find a way past Finnegan. The Lions netminder was impressive between the posts, clawing a Barcoe bullet away from the top right corner inside 60 seconds of kick-off.

He had a little help from Niall Brophy soon after, the defender taking a Niall Andrews header off the line in the 57th minute, before Finnegan was called into action again. The keeper made two great saves in a matter of seconds; first he pushed a stinging Jamie Owens shot to safety in the 69th minute, then he denied Dylan Whearty from the resulting corner.

Most of the second half had been played in Lions territory, but despite not being able to make the pressure count Evergreen refused to panic. They were denied once more when Finnegan stopped Grincell’s 71st minute snapshot, before a mass defensive effort blocked Barcoe’s close range header soon after.

The hosts finally made the game safe 11 minutes from time when Snype weaved his way through to hit the net. Not content to settle for 2-0 they made the points safe six minutes from time, Chris Whearty racing on to Barcoe’s poked pass and slotting it past Finnegan.

For Evergreen, who gave debuts to teenagers Peter Henebry and Chris Keane late on, the result keeps them in the hunt to retain their title.

As for the Lions, defeat leaves them facing a relegation play-off with Bridge United, with the losers joining Fort Rangers in Division One next season.