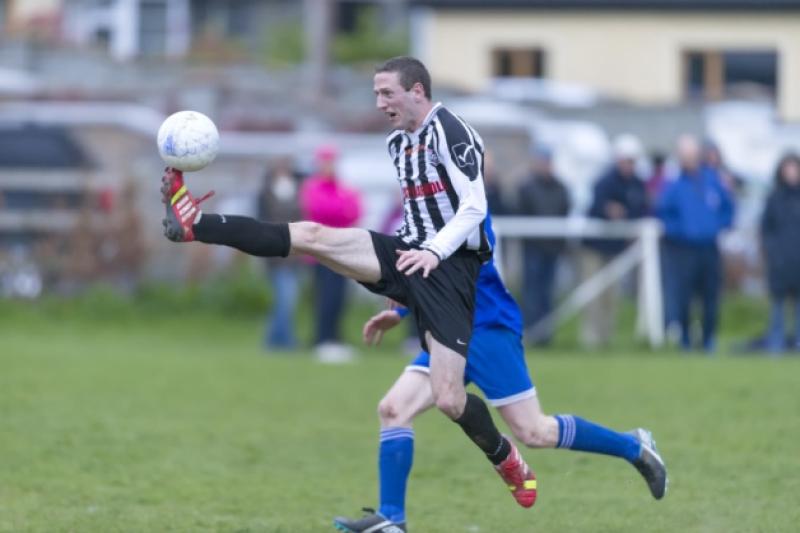 The race for the title got a little tighter after Newpark firmly ended Thomastown’s league aspirations during the week.

The race for the title got a little tighter after Newpark firmly ended Thomastown’s league aspirations during the week.

Stephen Dawson and Tony Delaney got the goals that gave Newpark the points in a 2-1 midweek win and ended Thomastown’s fading hopes of forcing a title playoff.

Earlier in the week Evergreen A hit Fort Rangers for seven in one of their catch-up games. Chris Whearty (2), Sean Barcoe, David Grincell, Jamie Owens and John Brett, as well as an own goal, hit the mark in a 7-1 result for the winners. Following on from Sunday’s win Evergreen now trail leaders Freebooters A by nine points with three games in hand - and they still have to play the Blues.

Stoneyford United’s battling spirit was rewarded when they secured their Division One status for another season.

Needing a win in their final game to stay up, goals from James Moran and Conor Coffey saw Stoney’ beat Deen Celtic 2-0 - and the drop. The result means that Southend United - once a title hopeful - will drop to Division Two with Freebooters B.

It was a bad week for Deen Celtic, who saw their promotion hopes come to nothing when Freebooters B beat them 3-2 in a midweek game. That result was enough to confirm Spa United’s return to the top flight.

Two goals from Rory Monks saw Thomastown United B clinch promotion as the Division Two campaign came to a close on Sunday, but the result wasn’t without a talking point or two.

Monks struck on the double as United beat River Rangers 2-0 to ensure their place in Division One next season, but it was another result that ruffled the feathers of other members of the chasing pack.

Earlier in the week United were given a walkover by champions Freshford Town. The three points gained pushed Thomastown ahead of Brookville and Evergreen C, two sides who harboured promotion hopes of their own going into the final round of games.

Once news of United’s Sunday morning win filtered through on the Kells Road, the afternoon game between Evergreen and Brookville became a dead rubber. To their credit the sides played on, Brookville winning 3-2 thanks to goals from Alan Ruth (2) and John Kavanagh.

Ironically, Freshford Town were given a walkover in their last game by Bridge United B.