Change of luck for Clover United 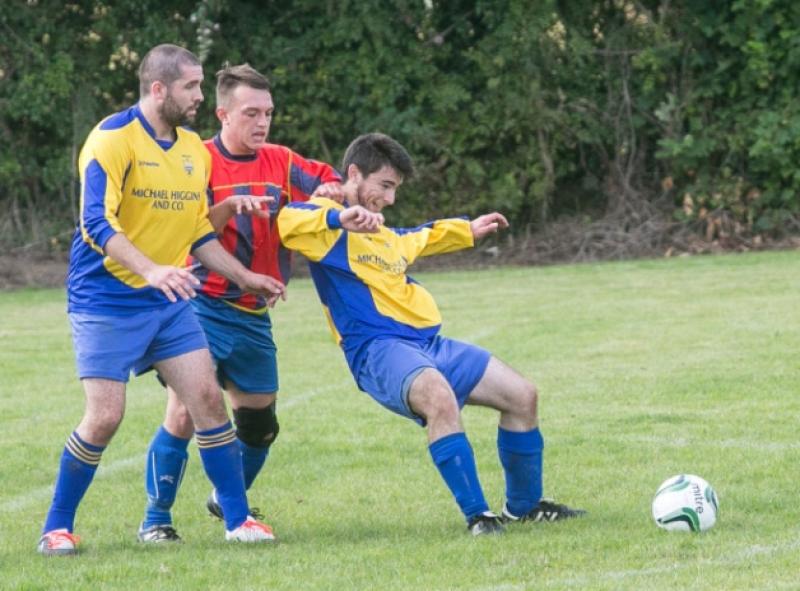 After a poor start to the new Kilkenny & District League season, Clover United’s luck has turned for the better!

After a poor start to the new Kilkenny & District League season, Clover United’s luck has turned for the better!

Having lost their two opening games of the Division One season to Freshford Town and Brookville, the Rathdowney club found third time to be a charm as they beat Tullaroan 3-2 to claim their first win of the season.

A Sean Delaney brace, coupled with a goal from Ray Bowe, helped Clover get off the mark with a 3-2 win on Sunday.

The result leaves Tullaroan bottom with no points from two games played, a position they share with Newpark B. The city side are also still searching for their first point of the new campaign after going down 3-0 away to Stoneyford United.

Stoney, who drew their first match of the season with Freshford, had Martin Murray (2) and Kelvin Mguni to thank as they earned the win.

The result leaves them joint second with Town, two points behind early pace-setters Brookville, who have six points from their two games played.

Deen Celtic may have voluntarily dropped into Division Two, but the Castlecomer club are determined not to stay there for long.

Michael Coughlan’s side, a healthy mix of youth and experience, got their league season off on the right foot as they beat Lions B 1-0 on Sunday.

They had a tough job against the hosts, with goalkeeper Robbie Lynch excelling on his return to the side, before John Doheny fired home the only goal of the game in the 80th minute to settle the contest.

River Rangers were the other big winners in the division, beating Evergreen C 2-1 on the Kells Road.

They had to do it the hard way, coming from one down after Aaron McDonald gave the hosts the lead, but a Daragh Murphy penalty, followed by a John Cody cracker, saw Rangers head off with all three points.

While Ormonde Villa and Bridge United B shared the spoils in their game, the all-city clash also ended with honours even. St Mary’s made the short trip the Fair Green a worthwhile one, cancelling out Paddy Kiely’s penalty as they drew 1-1.

Saints were the big winners as the Division Three season also got up and running.

Gortnahoe’s St Anne’s blasted from the blocks as they beat Ballacolla 4-0.

Karl Collins was the man of the moment for the Saints, firing home a hat-trick as they got off to a flying start. Victory was wrapped up with a fourth goal from Martin Phelan.

St John’s also celebrated a winning start to the campaign as they travelled to Callan and beat the United B team 2-1.

One up through Jason Delaney, Callan hauled the Saints back to level terms but were left empty-handed when Ryan Butler popped up with the winner for the city side.

Finally, Castlewarren Celtic made sure it was a day for away teams when they travelled to Freshford and came back with all three points.

Martin Doyle grabbed the only goal of the game as Celtic got their season going in the right fashion.

They will be hoping for a similar result when they travel to play St Anne’s this weekend.