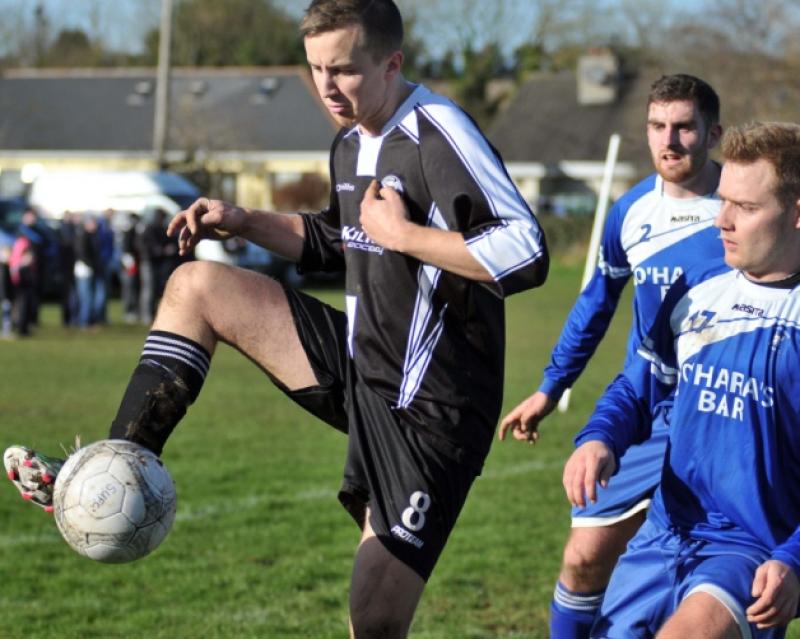 The quest for silverware continues on another front for Thomastown United - but progress to the Maher Shield final wasn’t without its worrying moments.

The quest for silverware continues on another front for Thomastown United - but progress to the Maher Shield final wasn’t without its worrying moments.

The meeting of the Premier Division leaders and near-neighbours Stoneyford United might have been seen as a David versus Goliath affair - but David gave their all!

In the end, Thomastown did what was needed, setting up a meeting with title holders Evergreen A, but it wasn’t until Michael O’Neill rolled a low injury-time ball into the net that they could really start thinking about the final.

In a game that swung from end to end the first half was a battle to see who could score first. Thomastown fired the first shot across the bows when Michael O’Neill whipped in a menacing sixth minute free from the right flank.

Derek Brennan did well to lose his man and get on the end of the delivery, but he couldn’t keep his header on target.

Stoney’ were quick to show their own attacking muscle, almost catching Thomastown cold. Brian Donovan’s long 13th minute throw arrowed towards Eamon Foley, who stole in at the back post, but Paul Dunne dashed from his line to snuff out the danger.

The teams continued to press and probe for a way through, using different tactics. Thomastown tried to put the squeeze on their hosts, while Stoneyford kept looking for a way to exploit United’s high defensive line.

In the end it was the visitors who came closest to breaking the deadlock in the opening quarter. Andy Kavanagh, an early sub for the injured David Kavanagh, thought he had scored when he cleverly flicked Michael O’Neill’s 18th minute corner goalwards, but Conor Coffey cleared the looping shot off the line at the back post.

The fast nature of the game meant it wasn’t long before Stoneyford mustered a reply. Eamon Foley put them in motion, making a great 30th minute break that took him through a series of midfield challenges. He released the ball to James Moran, who let fly from distance on the right, but his shot sizzled over the bar.

Within seconds, this open game went right back upfield. Michael O’Neill thought he had given Thomastown the lead when he got his end to Kelvyn Skehan’s cross and powered the ball goalwards, but Brian O’Shea made a great reaction save to save the day.

However, there was nothing O’Shea could do to prevent Skehan from pushing his side in front six minutes from half-time.

Showing great persistence, the winger chased after Derek Brennan’s long diagonal ball and kept it in play in the corner. Moving along the endline he skinned his marker, then drilled a low shot between O’Shea and his right hand post.

United looked good for their lead, almost doubling it before the break. Dessie Walsh thought he had scored when his powerful 43rd minute shot arrowed towards the net, but a touch from the offside Sean Brennan ruled the strike out.

United weren’t too ruffled by that, hitting the net again with 68 minutes on the clock. The second half had been a slow-burner, but Derek Brennan sparked it into life when he made a run to the near post to turn Michael O’Neill’s corner home.

Thomastown could have made the game safe when a clever Kelvyn Skehan pass saw Sean Brennan bear down on goal. He did all the hard work, beating the defender, but he blasted his shot over the bar.

That miss proved costly when Stoneyford hit back and halved the deficit with nine minutes to play.

The home side had continued to battle and got some reward for their efforts when James Moran arrived at the back post to force home Eamon Foley’s looping corner.

That goal was the signal for Stoneyford to launch several waves of attack as they tried to net a leveller. They came close to that - really close - just a few minutes later when John O’Shea got on the end of a brilliant Brian Donovan cross and directed a bullet-like header towards the inside of the far post, but somehow Paul Dunne got a strong left hand to the ball and clawed it out.

It was a nervy finish for Thomastown, but they made sure of their final berth in stoppage time. Picking up play after some tough tackling, Marty Lawrence dashed towards goal before unselfishly rolling the ball to the right for the incoming O’Neill to slide home.

The cold weather might have scuppered Newpark’s hopes of regaining top spot in the Premier Division - their game away to Callan fell victim to a frozen pitch - but there was great joy at the other end of the table.

Bridge United’s A team have had a wretched season, but gave their survival hopes a shot in the arm when they beat Freebooters A in Goresbridge.

United, who had already beaten the city side on the Fair Green, completed the double when Martin Bambrick netted an injury-time winner on Sunday morning.

“We were delighted to get the win,” beamed Bridge boss Denis Hynes. “It could so easily have gone either way - it was end to end for long spells.”

Bridge’s hard work paid off when Murty Broaders gave them the lead on the stroke of half-time. They held that advantage until the hour, when Jason Hennessy equalised for ’Booters, but Jason Holden pushed the hosts back in front with a long range strike soon after.

Freebooters fought hard, and thought they had snatched a point when Jack Poyntz struck three minutes from time, but Bambrick popped up with that dramatic winner, a result which was achieved thanks to some vital saves at the other end from Aidan Hynes.