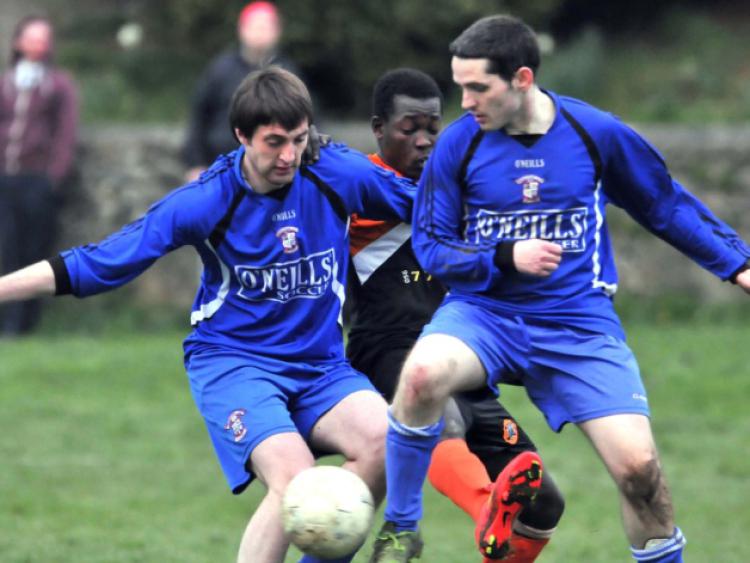 Third time proved to be a charm as St Mary’s got one over a city rival and earned a place in the last eight of the McCalmont Cup.

Third time proved to be a charm as St Mary’s got one over a city rival and earned a place in the last eight of the McCalmont Cup.

And how’s this to keep with all things three? Boki Martin was the hero, netting a hat-trick for the Saints as they handed Freebooters B their first defeat of the season at the Waterbarracks on Friday.

Mary’s, who ended their first league season with promotion from Division Two - they finished behind ’Booters - had played the Blues twice in the season, drawing one before losing the other.

However, their city rivals had no such hold over the Saints this time. Martin made sure of that, shooting his side in front on the hour when he showed great composure to steer a low shot through a sea of players after ’Booters failed to deal with Chris Connolly’s teasing corner.

The goal was just was what Mary’s needed, especially as Freebooters had just stunned their hosts by blasting in two quick goals to level an intriguing game.

Two down at the break, Freebooters made an ideal start to the second half when Paddy Kiely coolly fired home a 50th minute penalty after the impressive Shane Kelly was upended in the box.

Given confidence boost by that goal, the Division Two champs hit another two minutes later. Once more Kiely was involved, delivering a looping shot which was turned home by Chris Dawson from close range.

The goals were a nasty shock to Mary’s, who started with a strong attacking fashion. James Geoghegan had some good chances to put his side in front, but that honour fell to Boki Martin. He punished some slack Freebooters defending, crashing home a loose ball after the visitors failed to clear a goalmouth scramble with 20 minutes on the clock.

Freebooters didn’t take long to get the offensive side of their game going. Aidan Nolan sparked panic when his menacing 25th minute free was punched clear by Vinny Wallace. The ball fell to Kelly, who delivered a peach of a half-volley from the edge of the box, but his shot whistled past the outside of the left post.

St Mary’s upped the tempo again and, with another thrust, doubled their lead four minutes later. Gabriel Ajur did well to take down Martin’s superb crossfield ball, flick it over the advancing Stephen Buckley and turn it into the unguarded net.

Mary’s continued to hold the upper hand in attack, but they couldn’t add to their lead. Stephen Connolly went close with a header on the half-hour, but Buckley made a fine save. He was called into action again in injury-time, this time in quick succession to repel efforts from Geoghegan and Sunny Okonfor.

The missed opportunities looked to have cost Mary’s dearly, especially when Freebooters hit them with that quick one-two in the second half, but Boki Martin made sure the Saints would march on to the quarter-finals.

His second goal on the hour restored the Mary’s lead, but they still had their work cut out to silence the visitors - it took a great block from Johnny Barry to deny Chris Valentine a close-range equaliser with nine minutes to play, while Aidan Nolan also rattled the bar after the hour.

Martin still had time to complete his hat-trick and seal the city bragging rights. His hard work was rewarded when he chased down a throw-in directed to Buckley and blocked the clearing kick, which spun back into the ’Booters net.

It wasn’t all doom and gloom for Freebooters over the weekend. Their Youths team took a big scalp on Saturday when they beat Shelbourne to book their place in the semi-finals of the Leinster under-18 Cup.

Sean Doyle’s side showed no nerves as they beat their illustrious opponents 2-0, thanks to goals from Sean Bolger and Cian Loy.