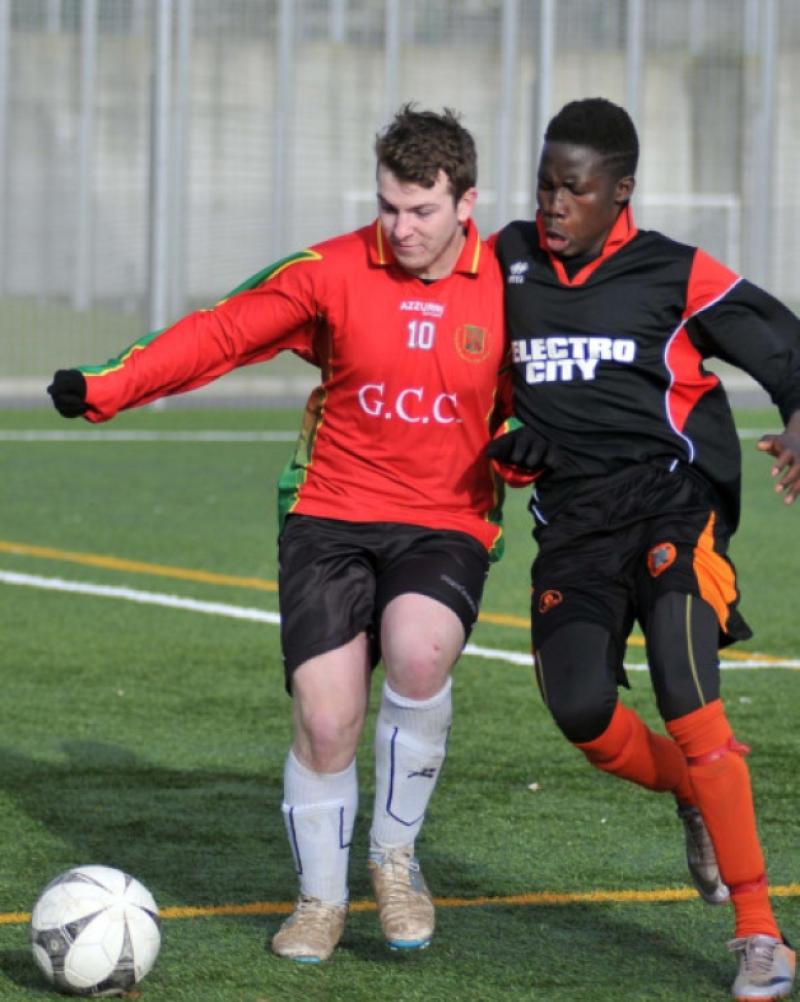 The curse of a penalty shoot-out cost CBS Callan dear as they missed out on the Carlow/Kilkenny divisional title.

The curse of a penalty shoot-out cost CBS Callan dear as they missed out on the Carlow/Kilkenny divisional title.

The Kilkenny side showed incredible heart at a chilly WaterShed on Friday, but were denied the under-19 Division Two title as Gaelcholaiste Carlow proved too sharp from the spot.

The Carlow side had five penalties in the shoot-out and scored all five. On a day where the margins were incredibly fine, it proved vital.

The result was heartbreaking for Callan, especially after they had fought their way back into the game. Carlow made something of a dream start, Dean Ó Ceallagh confidently firing home a third minute penalty after Conor MacRaghaill was tripped in the box.

Things got even better for Gaelcholaiste when they doubled their lead within seven minutes. There seemed to be little danger when Lee Ó Nuallain sent a high and hopeful ball forwards but the bounce caught Dylan Roche cold, looping over the netminder.

Callan were down, but they weren’t out. They gained an 18th minute lifeline after Peter Hennessy was tugged back in the box. Ryan Bergin took the resulting kick and made it look easy, slotting the ball low into the bottom left corner.

The goal spurred Callan on, Bergin and Hennessy linking up well with Eoghan Scriven to drive their side on. Their hard work paid off when they hit a leveller six minutes later, Shane Ó Neill putting through his own net after Lee Doheny had pumped in a teasing free.

The sides continued to carve out chances, but it was Carlow who went closest. MacRaghaill sent a close range shot whistling wide. Dean Ó Ceallaigh went closer, crashing his 40th minute effort off a post.

Just when Callan thought they had survived, Carlow struck again. Forced to parry a defensive header, Dylan Roche did well to stop the follow-up shot from Shane Ó Neill, but could do little to prevent MacRaghaill from tucking away the rebound.

Callan stepped up their efforts once more in the second half. Gabriel Ayuri and Ryan Bergin brought good saves from Peadar Ó hAonghusa, but he couldn’t stop Bergin levelling the game from the spot after Ayuri’s 67th minute cross struck a Carlow arm in the box.

Callan went for it in the last quarter, which they played with a man extra after Dean Ó Ceallaigh was dismissed for a second yellow. They came really close to snatching a winner when Bergin skilfully set up Ayuri, but his 82nd minute shot was brilliantly stopped by Ó hAonghusa, while Emmanuel Tacima cannoned a follow-up off the post.

That was as close as Callan would come to getting their winner, as Carlow’s 100% record from spot-kicks would prove.