Brilliant Broaders leads charge as United bounce back in style 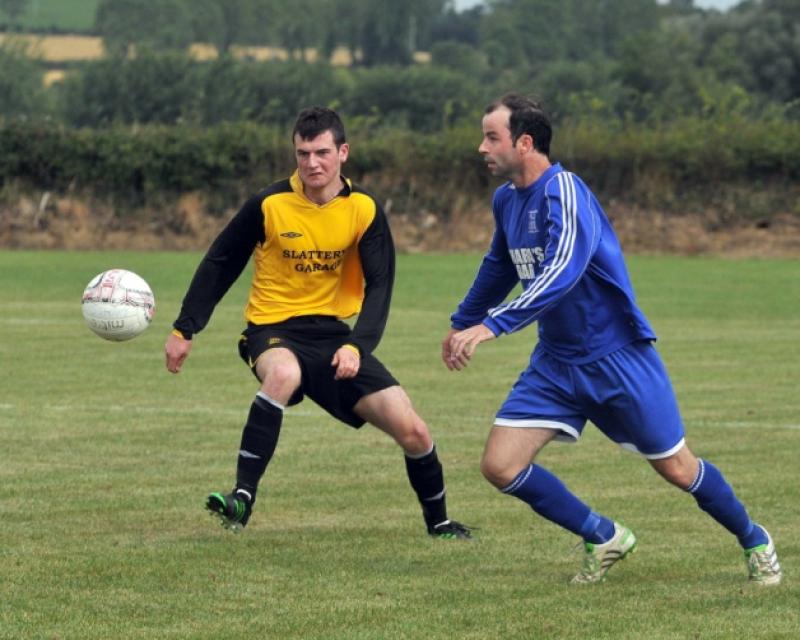 United, a strong tip to challenge Evergreen A for the league title, saw their credentials tested by a Fort Rangers side who were gunning for their first points of the season.

The visitors may not have won any of their opening three games, but made a mockery of that form when they stunned the hosts with a swift double whammy.

Rangers came out swinging from the start, giving United something of a scare within a matter of minutes. Emmet Nugent was at the heart of the move, shrugging off William Flood’s challenge on the left flank and dashing into the centre before firing off a shot with the outside of his right foot.

The ball curled towards goal, and looked certain to be a stylish opener, but netminder Rory Leadbetter got back in time to finger-tip the ball over the bar.

Rangers dictated much of the game’s early pace. Pressing through midfield, they made their hard work count after just 10 minutes.

Having gone close with his chance, Eddie Nugent fared better when he created an opportunity for younger brother Emmet. Racing on to a threaded pass from midfield, Emmet Nugent held off his marker and sped into the box, pausing only to slip a low shot inside Leadbetter’s left hand post.

Fort were full value for the lead and doubled it with a stroke of luck. A mix-up in calls between Leadbetter and Paul Dempsey saw the full-back head a wicked Eddie Nugent cross past his own netminder.

The two goals were a shocker for Thomastown, but they regained their composure with a little slice of their own good fortune on 23 minutes. A Dean Broaders header was directed towards Marty Lawrence but never got there as a touch off defender John Bambrick took it past his own ’keeper.

That was the start of an incredible spell for Thomastown who, in 21 minutes, went from two goals down to two goals up. Parity was restored by the 28th minute when Broaders showed his strength to hold off his marker from a throw-in, working an angle at the face of the box before drilling home an unstoppable shot.

They didn’t stay at level terms for long - within 60 seconds Broaders struck again. United sprang back into attack from the kick-off, Lawrence knocking the ball on for Broaders to cleverly flick over Jim Nugent from the corner of the box.

The wind was in Thomastown’s sails at that stage, but they weren’t about to let up. Michael Cullen had a chance to extend that newfound advantage when Lawrence teed him up for a long range shot, but his 30th minute effort flashed wide.

They went closer again to finding that fourth goal a few minutes later. In a move that started at the back Robert Skehan headed a Fort kick-out back to where it came from. Another Broaders flick-on followed, putting Lawrence clean through on goal, but he drove his shot wide.

Those missed opportunities were wiped out when Thomastown grabbed their fourth goal seconds before half-time. Having enjoyed a good spell of possession close to goal, working the ball from left to right until Flood found the space on the endline to drill a low ball into the six-yard box for Andy Kavanagh to side-foot home.

Fort were down, but certainly not out. They had a great chance to get back into the game when, five minutes after the restart, they were awarded a penalty after Eddie Nugent was upended in the box.

Nugent elected to take the kick himself, going for power but Leadbetter guessed correctly, diving to his left to push the ball to safety.

Had that spot-kick gone in things could have been so different for Fort. Instead, they were all but sunk when United added a fifth within a matter of minutes, Kelvyn Skehan springing the offside trap to finish from a Broaders cross.

Just for good measure, Thomastown made sure of the spoils little over 25 minutes from time. Once more Broaders was involved, showing great skill to head a Flood cross back across the box, presenting sub Stephen Connolly with a chance he couldn’t miss.

’Green back on top

Evergreen A moved to the top of the Premier Division with a five-star showing on Sunday.

The champions took their place at the summit for the first time this season when they tamed the Lions A team in Durrow.

Sean Barcoe was the main man for Eddie McEvoy’s side, grabbing a hat-trick as they downed the hosts 5-1. Cian Morton and Jack Poyntz were also on the mark for the city side, who have a 100% record from their four league games to date.

It proved to be a good weekend for the new league leaders, who picked up the first of their two wins in three days when they beat East End United A 3-0 in Bennettsbridge on Friday.

East End have been a tough nut to crack in recent years for the side from the Kells Road, but they got the better of this clash thanks to goals from David Grincell and Cian Morton. It was also an evening to remember for youths player Ben Hickey, who scored on his junior debut for the club.

While Newpark A beat the Lions A on Friday (see page 77) Freebooters A got back on the winning trail when they beat Evergreen B 3-0 on the Kells Road.

After an indifferent start James Kelly put the visitors in the lead, before Nathan West doubled their advantage. A strike from David Rice completed the win for Anthony Hanney’s side.