’Green machine Bang’ in the goals! 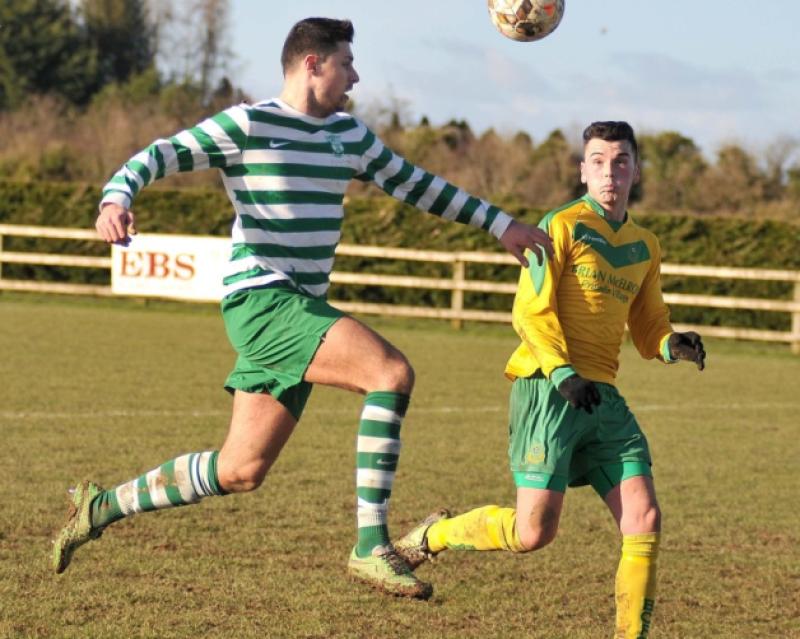 Their domestic form might be up and down, but there was nothing below par about Evergreen’s latest cup adventure.

Their domestic form might be up and down, but there was nothing below par about Evergreen’s latest cup adventure.

The city side gave a five-star performance as they confidently strode into the sixth round of the Leinster Junior Cup, beating Bangor Celtic to set up a clash with St Kevin’s Boys.

Packie Holden’s side had the best preparation for their crunch FAI Junior Cup tie with reigning champs St Michael’s, beating Celtic in style at a chilly Kells Road.

The hosts had to wait a while for the opening goal - into the second half, in fact - but once the floodgates opened Bangor couldn’t find a way to close them again.

After a patient opening 45 minutes, in which they had plenty of possession but nothing in the way of a real threat to Philip Fahy’s goal, Evergreen made amends with a strike-packed second half.

The breakthrough came after Bangor failed to clear Chris Whearty’s penetrating 53rd minute cross from the left. Celtic had their hands full trying to deal with Daragh Walshe in the centre but, despite his best efforts, he couldn’t get a full connection on the ball.

The danger wasn’t over for the visitors. Ben Hickey made sure of that, keeping the pressure on when he picked up play on the far side of the six yard box and squared the ball for Sean Barcoe to hammer high into the roof of the net.

The goal was met with a sigh of relief from the hosts, who had pressed and pressed in the first half but couldn’t find the final ball to match their efforts.

They could, and should, have taken an early lead. The game was only four minutes old when Tommy Earls and Ben Hickey linked up on the right, teeing Jamie Owens up to float over a telling cross. Stealing in at the back, Barcoe arrived to make the connection, but his header looped over the bar.

That proved to be Evergreen’s best chance in a shot-shy first half - Barcoe and Chris Whearty had half-chances that failed to hit the target - but as the stalemate continued a youthful Bangor side began to work their way into the game.

The visitors had a great chance to snatch the lead on the half hour. When the ball broke loose to the unmarked Robert Byrne on the left side of the box it looked like he just had to pick his spot, but Ben Hickey arrived from out of nowhere, sliding in to bravely put his body in front of the shot.

It was all change in the second half as, once that first goal hit the net, Evergreen attacked the Bangor goal with real intent.

Celtic were unlocked once again when Jamie Owens sliced them open with a great diagonal ball to the right. Ben Hickey killed it with his first touch, then dummied his way to shooting space, but Fahy stayed big to stop the 64th minute effort.

He couldn’t, however, deny Walshe at the second attempt. The striker rushed in and got his toe to the rebound, sending the ball spinning away inside the left post.

Walshe added his second, and Evergreen’s third, just three minutes. One of many who impressed with his hard work, the striker chased down a long ball and got his reward when his control took him past the last defender.

Walshe still had plenty to do, but did it oh so well. Drawing Fahy from his line, Walshe held fire until the ’keeper was outside the six-yard box, then coolly slipped the ball between the netminder’s legs.

Any hopes Bangor had of staging a late comeback were ended on 69 minutes, when the hosts bagged goal number four. Awarded a penalty after the marauding Robbie Quan was tripped up, Barcoe grabbed his sixth goal in three games when he rammed the penalty home.

The hosts were on song, but saved their best for last. Even with the game in the closing stages they remained full of running, Damian Kelly finishing a sweeping move when he crashed the ball home from the edge of the box after Jamie Owens rolled the ball his way.