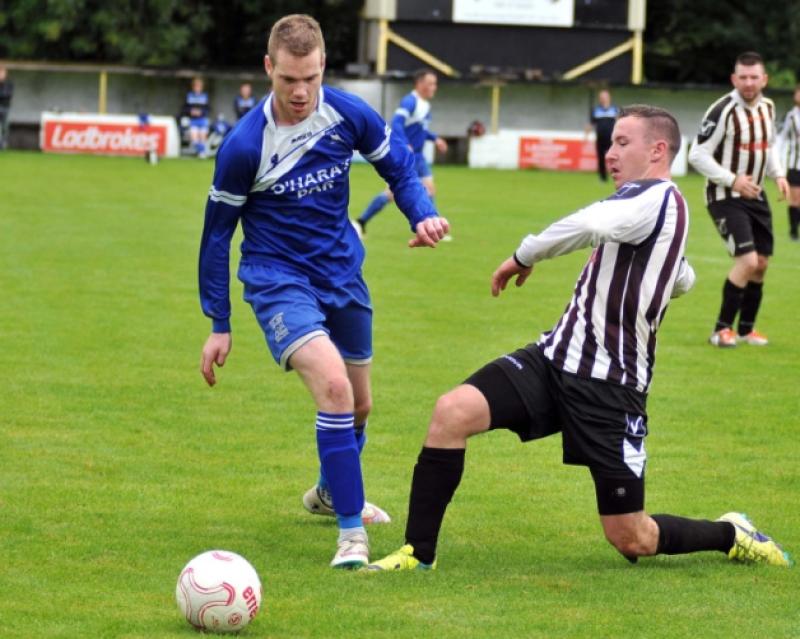 As far as setting a tone for the rest of the season went, Thomastown United’s effort was simply pitch-perfect.

As far as setting a tone for the rest of the season went, Thomastown United’s effort was simply pitch-perfect.

The reigning Premier Division champions gave a polished performance as they swept Newpark A aside in Buckley Park.

The contrasts between the sides were notable. For United, Sunday’s win was their third in eight days, a run which has seen them rack up 12 goals and net a hat-trick of clean sheets.

The results haven’t been as kind to Newpark. Two losses to Evergreen A, one of which saw them exit the Maher Shield, means a miserable start to the 2015/16 campaign - they’ve scored one goal and have little else to show for their efforts.

Such is their confidence Newpark are convinced the tide will turn. However, the concession of two early goals and a series of injuries only served to compound their misery at the weekend.

Starting with the confidence and swagger of champions, Thomastown quickly showed they could talk the talk too. It took them just four minutes to stamp their authority on the game, then four minutes more to make a strong claim for all three points.

Working the ball around in a strong and patient manner, Thomastown were quick to prise Newpark apart.

Paul Dempsey provided the opening, racing down the left channel before fizzing a wicked ball across the box. The cross had too much pace for Marty Lawrence to reach, but fell just right for Mick O’Neill at the back post.

If that goal was a setback for Newpark, things got even worse a few minutes later. Buoyed by that goal, Thomastown went on the hunt for a second - and quickly got it.

Working the ball around midfield, United seemed content to hold possession until a gap opened up. David Kavanagh, Paddy Khan and Eamon Lyster found room to feed Dempsey on the left but when the option wasn’t open he was content to knock the ball back towards his own defence.

Stepping up, C.J. Browne and Robert Skehan increased the pace by starting another attack. Skehan did most of the damage, threading a great ball through the Newpark defence for Andy Kavanagh to ghost on to. Although his first shot was blocked by Newpark netminder Jamie Cummins, Kavanagh did well to win possession again, knocking the ball across the goalmouth for Lawrence to add the finishing touch.

The game was only eight minutes old, but already things were looking grim for Newpark.

It didn’t get any easier for the hosts who, despite having five players in midfield, couldn’t get the upper hand on their rivals. Thomastown continued to find the time and space in which to control the flow of the game, while forcing Newpark’s back three to work overtime to cope with the pressure they were being put under.

Although Thomastown did take their foot off the gas, things didn’t get any easier for Newpark. They were forced to make two changes before the half hour, with both Ben Ryan and Darren Hayes leaving the fray.

Now playing with a flat back four they enjoyed more possession, but still couldn’t trouble Thomastown goalkeeper Zak Shermer. Their best chance came when Niall Kiely cleverly flicked a long Jamie Cummins kick-out into the path of Henry O’Neill, but his 36th minute half-volley flashed over the bar.

The second half saw Newpark up the ante again, but still they couldn’t find the goal their efforts craved. Sub Joey Walsh thought he had found a way through when he dashed on to Tommy Donovan’s deft 54th minute pass, but Shermer was quickly off his line to smother the danger.

A tough morning got even harder for the hosts when they lost Niall Kiely to injury before the hour mark, but still they continued to fight for a way through.

Kiely’s replacement, Gary Gleeson, almost made an instant impact when he dashed down the left and fed Joey Walsh with a great pass, but Shermer managed to block the shot before collecting the rebound as it spun back into his path.

Sensing they were under pressure, Thomastown stepped up through the gears once more.

Increasing the pace almost yielded an instant result. Mick O’Neill spurned the chance to make it 3-0 when his sidefoot shot sailed over the bar after some great work from Marty Lawrence. Steven Connolly also missed the opportunity to add to his side’s lead soon after, crashing a powerful shot into the side netting from the tightest of angles.

The pressure quickly told, however, as United made the game safe by the 65th minute. Turning over possession from a quick Newpark kickout, Mick O’Neill cut the ball back across goal for Connolly to add the finish.

With that, United’s league season was up and running. Newpark, who had promising performances from Tom Doyle, Karl Gleeson and Joey Walsh, will be hoping they can turn that corner - and soon.

Elsewhere in the Premier Division, Freebooters A bagged all three points in a tough tie away to Lions A.

Ryan Bergin, Alan Conway and the returning Nathan West were on the scoresheet as the Blues prevailed in Durrow - Michael Dooley netted twice for the hosts.

Callan United picked up three points with a walkover from Freshford Town, while bragging rights on the Kells Road were secured by Evergreen A - they beat Evergreen B 3-0 thanks to a Sean Barcoe brace, with Brian Jordan adding the third goal late on.