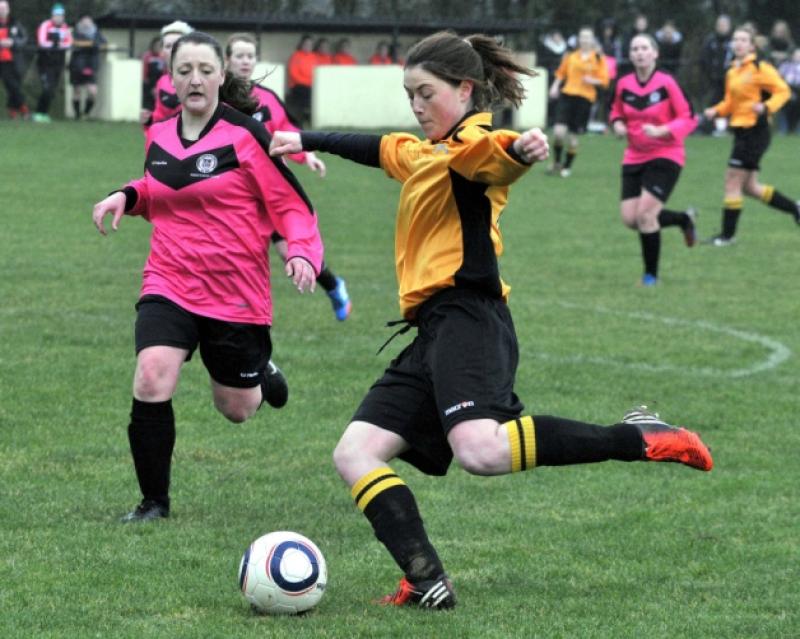 Dreams of Leinster glory are still very much alive for the Kilkenny & District League’s newest side.

Dreams of Leinster glory are still very much alive for the Kilkenny & District League’s newest side.

The women’s inter-league side stayed on the hunt for a provincial title, but tip-toed rather than marched their way to victory when they got the better of a dogged Combined Counties side in Derdimus.

Kilkenny knew a good start would be imperative if things were to go their way, but even they were amazed at how quickly the game took on a black and amber hue.

There were scarcely two minutes on the clock when, with their first real attack, the hosts went in front. The goal owed much to the hard work of captain Breda O’Neill, who won a throw-in and made room to fire off a diagonal shot, but there was an element of good fortune about the finish. The ball never looked like hitting the net until it clattered off the incoming Jemma Komar, stopping only after it bounced into the unguarded net.

It was a start Kilkenny could hardly have dreamt about, but they wasted little time in trying to double their new-found lead. Jenny Brennan used her skills from set-pieces to trouble the opposition when she blasted a thumping free-kick towards goal after just six minutes, but netminder Hazel Bracken did well to beat the ball out.

The Combined Counties were rocked by Kilkenny’s fast start, but quickly regained their composure and set about testing their opponents. A surging run from midfielder Leona Archibald did just that, her pace taking her into the box on 16 minutes, but her shot was stopped by Irene Guilfoyle. The rebound fell to Louise O’Brien, but she was shut down by some strong defending from Aoife Dunne.

Counties were grateful to their own defenders for not falling even further behind soon after. In an excellent move that started in their own half Kilkenny swept forward, the hard-working Laura Dooley picking out Breda O’Neill with a clever ball which was pulled back for Jenny Brennan to run on to.

Swerving to avoid the out-rushing Bracken it looked like Brennan had taken the ball too far left, but she still managed to squeeze her shot towards the inside of the left post. The ball rolled towards it destination, but Kilkenny’s cheers were cut short as Richelle O’Neill slid in to nick the ball away to safety.

Despite that scare the visitors had been steadily playing their way into the game. As they began to enjoy more possession in the middle third they made the Kilkenny defence work harder. Laura Thompson had a great chance to draw her side level when she curled a menacing free-kick around the left side of the wall.

Netminder Jennifer Russell saw the shot late but did well to get behind the ball, dropping to her left to smother the 26th minute effort.

They had another chance, from one more set-piece, 11 minutes before the break. Richelle O’Neill caught Kilkenny cold with a cleverly-lofted free that sailed over the wall. Laura Thompson did well to connect with the dropping ball, but couldn’t keep it on target.

Kilkenny had drifted out of the game in the second quarter, but shook themselves alive from the start of the second half.

Sensing that a second goal was vital to kill off the Combined Counties challenge, the Cats quickly went on the hunt. Sparked by Aine Lannon’s composed clearance from the back, a Kilkenny counter-attack saw the opposition caught light in their own defensive ranks. Jenny Brennan picked up possession, losing her marker with a neat turn before slicing the defence open with a quick diagonal ball that sent Breda O’Neill on her way.

The captain’s pace was too much to deal with, as she sped into the box. Left facing Hazel Bracken a goal seemed certain, but a heavy touch gave the goalkeeper time to get down and block the ball.

The danger wasn’t over, as the loose ball spilled into the path of Jemma Komar. Showing great composure Komar picked her spot with a clipped sidefoot shot, but Fiona Keating made a sliding stop to keep the ball from crossing the line.

Kilkenny kept on the attack after that, pressing hard for a second goal that just wouldn’t come. Jenny Reddy had a pop at the target after Jenny Brennan teed her up, but she watched her shot fly wide. The hosts had another go before the hour mark, O’Neill scrapping for the ball in the corner and flicking it back out to Laura Dooley, but her lobbed effort soared over Bracken’s crossbar.

As time wound down the sides stepped up their efforts, but were still missing the final step. Counties were first to have a go, Amy Matthews trying her best to lob Russell with a cheeky 74th minute chip, but the ’keeper made the stop. Within seconds she turned defence into attack, as her kick-out was flicked on by O’Neill to Brennan, but Bracken raced from her line to smother the danger.

The Cats kept on the prowl for that second goal, going within a whisker of getting it with nine minutes left. Jenny Reddy went agonisingly close when, after some great work with Jenny Brennan, she raced through and steered a low shot beyond Bracken, but the ball rolled just past the wrong side of the left post.

They went close again a few minutes later, with Jemma Komar slogging hard for the team. Winning a kick-out she knocked the ball on to Jenny Brennan, who curled a great shot towards the inside of the far right post, but the ball flashed wide of the mark.

Pressing and pressing, Kilkenny finally got their reward five minutes from time when Brennan took down a Lannon free just inside the box. The striker lost her footing at that second but Jenny Reddy was on hand to pounce, coolly lashing the ball home to secure her side’s place in the final.