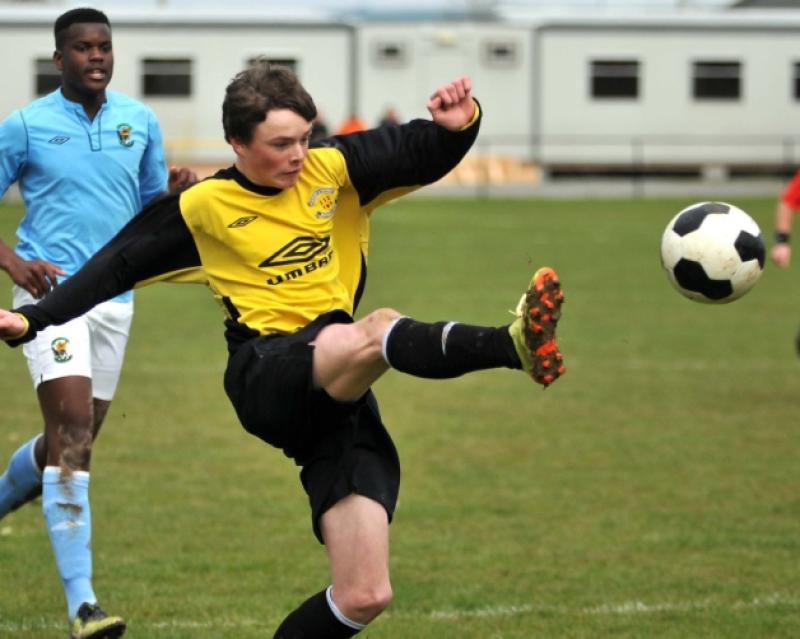 Kilkenny’s quest to become under-16 Leinster champions was derailed when the North Dublin Schoolboys turned party-poopers when they snatched the spoils in the battle of the table-toppers.

Kilkenny’s quest to become under-16 Leinster champions was derailed when the North Dublin Schoolboys turned party-poopers when they snatched the spoils in the battle of the table-toppers.

Sunday’s meeting at Derdimus couldn’t have been more delicately balanced. Win, and Craig Wall’s unbeaten side would finish top of the pile in Leinster, earning a place in the All-Ireland semi-finals.

However, North Dublin travelled down safe in the knowledge that a draw, thanks to their superior goal difference, would see them pip the Cats.

Yet, the visitors weren’t content to sit back and take a point. Instead, they delivered a performance that saw them wear Kilkenny down before a late flourish pushed them towards the final four.

The deck might have been stacked in their favour, but Dublin swiftly showed they hadn’t come to Derdimus to settle for the draw. Quick off the mark, they used their pace and physical power - the height in the spine of their side was something else - as they pushed forward for an early goal.

They took just two minutes to sound out a warning. A neat turn saw Jack McGlade carve out space in the corner to dig out a cross which netminder Ciaran Farnan had to race from his line to punch clear.

Kilkenny were no slouches either; a great ball from Rory Monks put Eoin Wall through on goal, but Charles Okoye made a vital block to deny the clean strike.

Most of the early pressure was with Dublin, however, so it was no surprise to see them take the lead. Stephen Nolan was the architect, dashing down the left before delivering a 12th minute cross for McGlade to gleefully head home at the back post.

The goal was a setback, but Kilkenny weren’t about to roll over. Wall showed as much a few minutes later, latching on to a raking Ben Maher pass and streaking past the last defender. A clever flick beat the advancing Eoghan Maloney, but Wall’s shot bounced past the wrong side of the far post.

Dublin weren’t slow in coming forward either, hitting back within seconds. Mo Saeed, a towering presence in midfield, found Stephen Nolan with a telling pass that ended with another great cross, but Cian Flynn’s stabbed shot spun over the bar.

Failing to take that chance proved costly. Kilkenny went close Adam Masood charged down a Lee Rock clearance and unselfishly squared the ball for Eoin Wall, but he couldn’t prevent his header from looping over the bar.

Wall kept looking to create chances, and got his and Kilkenny’s reward with 20 minutes on the clock. Conor O’Keeffe got them going with a sprayed pass from deep midfield to the left.

Masood was on it in a flash, delivering a super cross that saw Wall leave the two big central defenders in his wake before deftly lobbing netminder Maloney.

Kilkenny were full value for that equaliser, the goal silencing Dublin’s attacking. Yet, they couldn’t build on it; the visitors were strong in defence, coping well and winning every high ball that came their way.

Dublin regrouped at half-time, doubling their efforts to get back in front. They almost did just that within four minutes of the restart, as Mo Saeed’s corner broke in front of Stephen Morley, but a Ben Maher block and super save from Ciaran Farnan denied the midfielder at the double.

Kilkenny’s relief was fleeting as, within a matter of minutes, the Dubs were back in front. Hesitancy in defence cost the hosts, who failed to deal with Tino Nyazika’s floated diagonal ball and paid the price when Cian Flynn ghosted in to apply the finish.

Kilkenny were quick to counter, but unlike the first half they couldn’t make the breakthrough. Rory Monks thought he had provided a telling ball for Colm Whelan, but his 48th minute shot was beaten away by Eoghan Maloney.

The danger wasn’t fully over, as Conor O’Keeffe controlled the rebound and had time to pick his spot, but he squeezed his shot past the wrong side of the left post.

The Cats refused to buckle, but saw another golden chance go abegging soon after. Sub David Maher was heavily involved, driving down the right to gather Colm Whelan’s great ball and whip in a vicious cross. Rory Monks went for goal with a brilliant diving header, but his effort flashed across the face of goal.

That let-off was heeded by Dublin, who used their physical strength to finish off their hosts. Lee Rock made it 3-1 on 58 minutes, coming up from defence to force home a dangerous Saeed corner. With Kilkenny wilting, Robbie Dunne completed the scoring 13 minutes from time, getting a free header to another Saeed corner.

That confirmed the visitors as champions and left Kilkenny down and out.

There was better news for the Kilkenny under-15s, but they face a waiting game to see if they qualify from Leinster.

Ronnie Grace’s side fell behind to Wicklow early on, but hit back in style to record a 7-2 win. Colm Whelan grabbed the headlines by striking four goals, while Adam Kenna, Adam Masood and Mark Power were also on target.

Kilkenny are now top of the table a point clear of the Midlands League, but they can overtake the Cats should they beat Wexford in their final group game later this month.