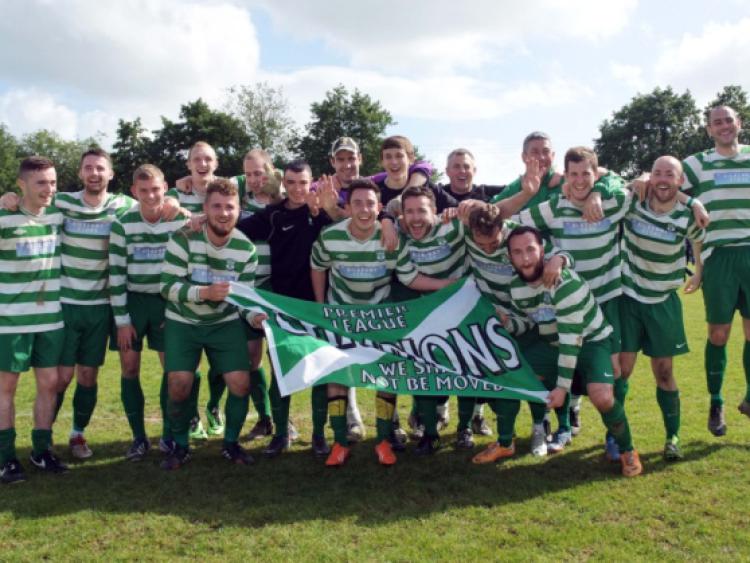 The race for the Premier Division title went to an extra lap, but it was champions Evergreen A who had the charge needed to reach the finish line first.

The race for the Premier Division title went to an extra lap, but it was champions Evergreen A who had the charge needed to reach the finish line first.

David Grincell was the toast of the Kells Road, the striker blasting home an unstoppable rocket to give the boys in green and white a fifth successive top flight crown.

It was a tight game where it looked like one goal would settle it, but Grincell’s effort was something special.

There were just 22 minutes on the clock when Grincell netted what would prove to be the title decider at Derdimus on Sunday.

Picking up possession on the left, just in front of the dugouts, it looked as if there wasn’t much on for Grincell, but as he cut inside space began to open up.

Once he was given time and room to push into a central position the striker saw his chance and took it, unleashing a long range strike that dipped and swerved as it flew across goalkeeper Michael Lambert and screamed into the net.

The goal was one part of what proved to be an entertaining battle between the league’s traditional big hitters.

Both sides went at it from the off, trying their best to land the first big punch. It was Freebooters who settled fastest, showing great pace through Aaron Molloy on the wing and the top two of Jason Hennessy and Dessie Hayes.

They used that speed to good effect early on, almost catching Evergreen cold with a zippy attack. Niall Andrews thought he had taken the right option when he went to head Damien Raggett’s long throw back to his goalkeeper Pierce Dargan, but he didn’t see Hayes stealing in on the blind side.

Sensing a chance, Hayes burst forward. Pouncing on the ball he zoomed towards the box but Dylan Whearty was alive to the threat, keeping stride with Hayes long enough to make a ball-winning tackle.

’Booters might have been missing Paddy Cahill and Ger Hayes for the match, but were determined that the absence of two regulars wouldn’t check their stride. They almost proved as much, when a move of steel and strength brought them to within a whisker of taking a 14th minute lead.

Inspired by Geoffrey Brennan, who won a crunching tackle in midfield, the Blues split their rivals open. Linking up with Hennessy, Brennan played a one-two with his team-mate and surged into the box, but his shot was deflected to safety thanks to a last-ditch Evergreen challenge.

Evergreen took a little longer to find their feet, but once they did they showed their attacking presence was equally as impressive. Sent on his way by Damien Kelly’s telling ball, Chris Whearty danced down the touchline and into the corner, but couldn’t pick out a colleague with his venomous cross.

Evergreen’s confidence surged to a new high once Grincell blasted home his wonder goal, but they almost lost their lead as soon as they had found it.

Stung into action, Freebooters went back on the attack right from the kick-off. The fleet-footed Aaron Molloy charged through the Evergreen defence, but his stinging drive whistled over Pierce Dargan’s crossbar.

The Blues kept looking for a way back into the game. Hennessy and Jack Poyntz tried their luck with shots - the latter appealing his had struck a hand - but neither troubled Dargan. David Rice also had a go, getting his head on a James Kelly corner, but he glanced his 25th minute effort wide.

With their defence keeping ’Booters at bay, Evergreen began to work at winning more battles further up the field. While chances from play offered little they did have better luck from the dead ball.

Chris Whearty moved in from the wing and tried his luck with a few long range free-kicks. His first effort was the best, the ball fizzing past a four-man wall and escaping the grasp of Michael Lambert, but the netminder moved smartly to snap up the ball at the second attempt.

Freebooters were quickly out of the blocks for the second half, but again couldn’t make the pressure count. Once more David Rice did well to get on the end of a corner, the defender timing his run to meet Aaron Molloy’s delivery, but his 48th minute header was deflected over.

Evergreen read the script second time round, Pierce Dargan moving off his line to punch the ball clear before Rice could win it.

The ’Greens were no slouches when it came to finding their attacking form in the second half. But for the alertness of Michael Lambert, they would certainly have doubled their lead within eight minutes of the restart.

Tommy Earls was the provider, flinging in a lengthy throw-in into the box. Jamie Owens was quickest to react, directing the ball towards the inside of the far post with a deftly-flicked header.

For a split-second it looked certain to go in, almost enough to leave Evergreen with one hand on the trophy, but Lambert raced across his line to make a super save, finger-tipping the ball over the bar.

Both sides showed they have strength for the future, bringing some younger players into the fray. Cian Loy was first to make his presence felt after Damien Raggett won a challenge with Damien Kelly. When play spilled in his direction Loy seized the ball and quickly worked it on to Molloy on the left. He had time and the space to run at the Evergreen defence, then fired off a vicious strike, but Pierce Dargan did well to punch the 71st minute effort around the post.

The game was tighter in the second half, with both defences making telling blocks. Grincell showed composure to take down a Jamie Owens cross but the ball was nicked off his foot by James Kelly.

Meanwhile Jason Hennessy suffered a similar frustration at the other end. Just as he raced on to Geoffrey Brennan’s stabbed pass, Vinny O’Brien moved in to make a vital block.

As the game moved into injury-time Freebooters gave one last throw of the dice. Jack Poyntz broke from the back and whipped in a teasing diagonal ball. When Dessie Hayes killed it on his chest and turned for goal, Freebooters’ hopes soared - but Tommy Earls rushed in to whip the ball off the striker’s foot.