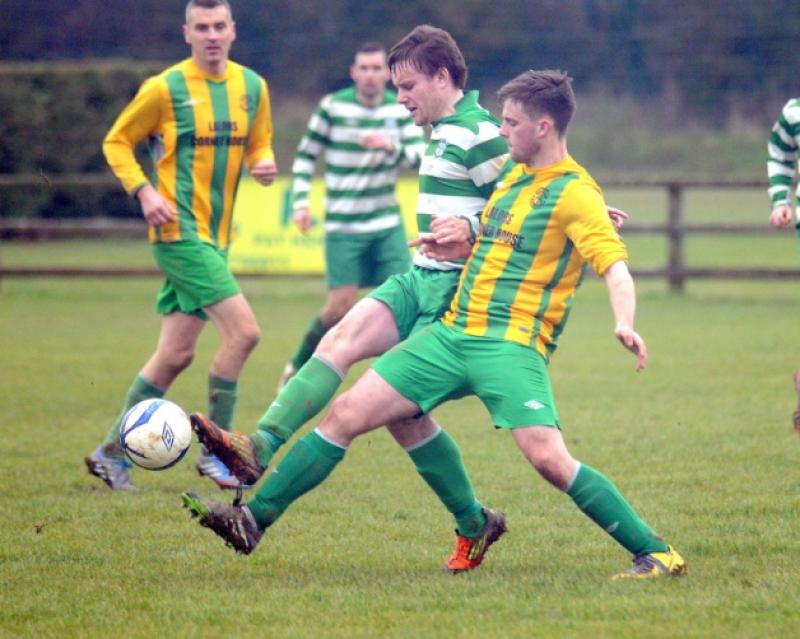 Two goals from an unlikely source saw Evergreen B keep up their winning ways - but there was more concern for East End United A.

Two goals from an unlikely source saw Evergreen B keep up their winning ways - but there was more concern for East End United A.

Defender Adrian Kealy struck twice in the opening quarter as the city side put more distance between themselves and the teams at the bottom of the Premier Division, a group that includes the Bennettsbridge men.

The win, Evergreen’s fourth, saw them open up a two-point gap on East End and move out of the bottom three, but they made hard work of their success.

It wasn’t until the closing minutes, when full-back Tim Brennan confidently fired a penalty high into the middle of Eoin Doyle’s net, that the hosts felt they had finally shrugged off a tricky East End.

That dip seemed anything but possible, especially after the fast start the hosts supplied on the Kells Road.

The game was only seven minutes old when Gary Maher and Niall O’Callaghan’s side took the lead. Tim Brennan did plenty of the damage when he fizzed in a free-kick from the left, whipping the ball across the six-yard box.

The low delivery caught East End cold, giving Adrian Kealy time to get in and turn a stopping header inside the near post.

The duo were at it again when Evergreen doubled their lead just four minutes later. Brennan delivered from a corner this time, driving in a ball from which Kealy found the net, albeit via an East End deflection.

United struggled to recover from that double whammy, taking time to get back into the game. Paul Murphy had the best of their early chances, towering over the defence to turn a 19th minute header goalwards, but Eoin Maher was never troubled.

Evergreen seemed comfortable for long spells; along with Oisin Corr and Michael Cashin proving a solid central midfield pairing the pace of Jamie Conway was a constant headache for the visitors.

Conway was at the heart of what could have been a third goal for Evergreen five minutes before half-time. Dashing down the left, he whipped in a vicious cross towards Mark Owens. The ball cannoned off defender Ross Dowling, spinning back towards goal, but Eoin Doyle recovered in time to make the save.

Had Evergreen grabbed that third goal it could have been game over. Instead, they switched off for a split-second and let United back in.

With the half in its dying seconds, East End gave it one last throw of the dice. Beating the offside trap, James Nolan’s diagonal run took him to the left as he looked for a gap to deliver a cross.

With no space available Nolan shifted play back to Kieran Dowling, who worked back into the middle of the D before thundering an unstoppable shot in off the underside of the bar.

The goal was a bodyblow for Evergreen, who saw their grip on the game had been loosened. Buoyed by that goal East End went hunting for another from the second half kick-off. They nearly got it too, sub Killian Phelan slicing the hosts open before squaring the ball for Paul Murphy, but he lashed his shot over.

Evergreen head to weather a storm, but regained some composure after East End lost Ross Dowling to a red card on 65 minutes. They had some good chances after that - Mark Owens bringing a good save from Doyle before the’ keeper dashed out to stop the advancing Jamie Conway and Stephen Connolly with two solid tackles within a matter of seconds.

Evergreen were getting closer, but only settled their nerves when Brennan converted that late penalty, following Phelan’s hand-ball in the box. That left East End to finish with nine men, but Evergreen also got a red card after Mikey McDonald was sent off in added time.