Cahill is Premier’s Player of Year 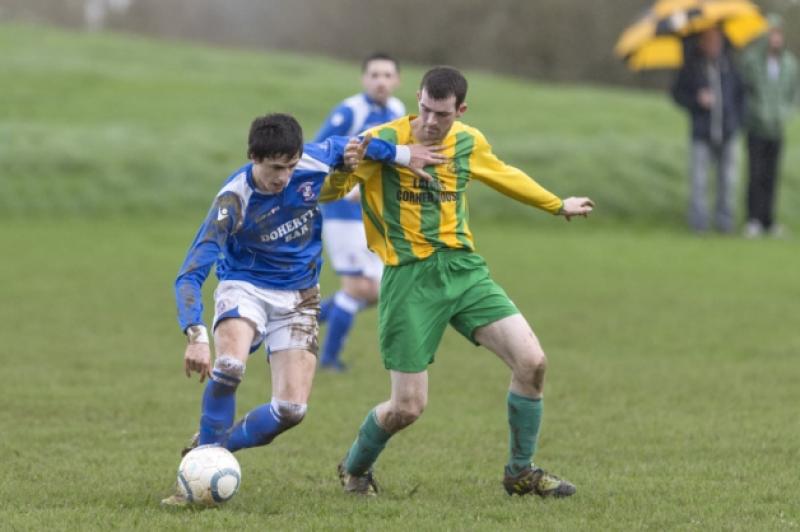 It may have ended on a low note for his team, but Paddy Cahill will have an extra special reason to remember the 2013/14 soccer season.

It may have ended on a low note for his team, but Paddy Cahill will have an extra special reason to remember the 2013/14 soccer season.

The Freebooters A midfielder was rewarded for a series of impressive performances by picking up the Kilkenny & District League’s Premier Division’s Player of the Year award.

Cahill was a member of the Blues team who won the McCalmont Cup this year, as well as forcing the race for the league title all the way to a play-off.

A vital cog in the middle for ’Booters he impressed with a series of composed performances for the city side, a run which also saw him earn a call-up to Ollie Walsh’s Oscar Traynor squad.

Cahill wasn’t the only big winner in the campaign, as more junior players completed their successful seasons by winning individual honours.

Callan United’s Simon Burke was crowned best player in Division One, the honour coming at the end of a season where Callan won the league and cup double, while also reaching the McCalmont Cup final.

Elsewhere Nigel Stanley rounded off a very impressive season by earning the Division Two Player of the Year tag.

Just like Burke Stanley won a league and cup double for a rampant Freshford Town, who also blazed trails in both the FAI and Leinster Junior Cup. He was also at the heart of the Oscar Traynor side that finished top of their group before bowing out to eventual winners the AUL.

There was a silver lining to the season also for Mick Kennedy from Lions B. The Durrow men finished as runners-up in Division Three, and lost the Cup semi-final to Newpark C, but Kennedy was selected the division’s top player.

Good as the men and youths were, none could match the league’s most successful player as Women’s Division One award winner Jenny Reddy.

Playing for East End United, Reddy landed the League, Cup and Shield honours with the Bennettsbridge club, a trio of titles she added to the Leinster League crown won with the Kilkenny & District League team. Her inter-league colleague, Piltown’s Dorothy Carroll, was selected as the Women’s Division Two Player of the Year.

Before that the League will hold its annual meeting in the Springhill Court Hotel on Thursday, June 19 at 8pm.

U-13 Kilkenny People League Division One: Success Edogan (Freebooters A)

U-12 Glanbia League Division One: Liam Moore (Evergreen A)