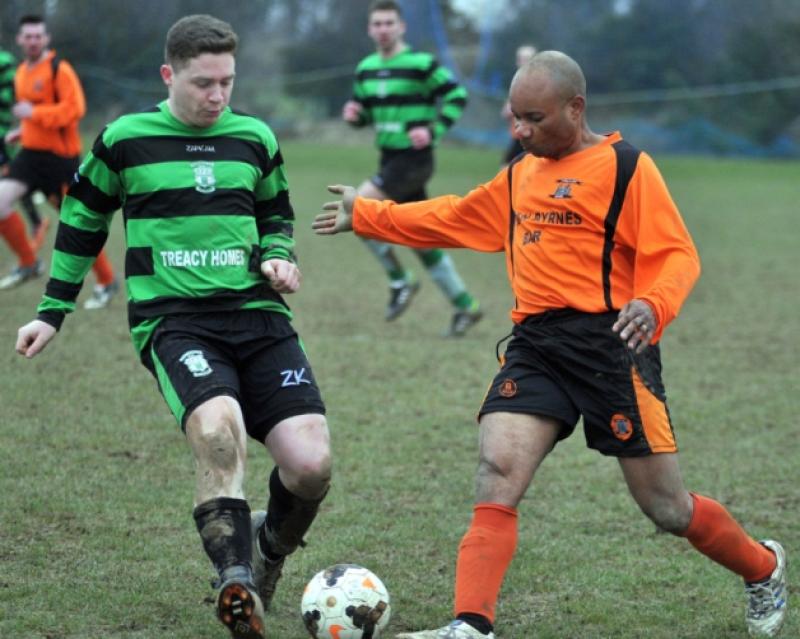 It may be their debut season in the Kilkenny & District League, but St Mary’s are still very much on the march!

It may be their debut season in the Kilkenny & District League, but St Mary’s are still very much on the march!

Sonny Okonofor made sure that the newcomers could see their season end with a silver lining, striking late to edge a city derby with Evergreen C in their Division Two Cup clash at a chilly Kells Road on Sunday.

A tie that looked certain to be heading for extra-time was finally decided when Okonofor bagged the winner with little more than 60 seconds of normal time remaining.

Giving everything in one last charge, the Saints poured forward in attack. Boki Martin was at the heart of the move, playing his part before a low diagonal ball picked out Okonofor on the right side of the box.

Beating the offside trap, Okonofor cleverly jinked back inside his marker, then coolly clipped a quick low shot across ’keeper Dara Simpson and into the far corner of the net.

It was a goal worth winning any cup tie, but the real surprise was that a St Mary’s side who had dominated in attack were forced to wait so long for their winner.

Missing some players, Evergreen were forced to use all their reserves for Sunday - manager Davy McDonald lined out for this derby, taking the right full-back shirt for his side - but while the exchanges were even enough over the first quarter St Mary’s quickly began to rack up scoring opportunities.

Okonofor served the first warning that it would be a busy day for the Evergreen defence when he battled to win possession close to the box. Breaking right, he made enough room to shoot, but saw his 21st minute effort cannon back off the crossbar.

Evergreen proved it wasn’t all one-way traffic but, like their rivals, they couldn’t make their efforts count. Donal Brennan had a great chance to push his side in front when Colm Walsh’s inswinging 25th minute corner came his way.

The slightest touch would have taken the ball past netminder Keith Malone, but Walsh was a whisker away from making the connection.

It didn’t take long for Mary’s to go back on the attack. Set up by their hard-working midfield, Chris Connolly and Vinny Wallace linked up well to send Boki Martin on his way, but he lashed his shot over the bar.

The game needed a goal, but for all their pressure St Mary’s were shocked to find they had leaked the opener. The Saints were in a flap after another teasing Walsh corner wasn’t cleared properly on 32 minutes.

The ball bounced to the edge of the box, where Jack McAuliffe pounced, unleashing a shot which crashed through a sea of players and hit the net.

The remainder of the half saw St Mary’s turn up the pressure on their hosts as they looked for an equaliser. Steven Connolly went close with a header, while Martin had a stinging snapshot, but both were comfortably dealt with by young Evergreen netminder Dara Simpson.

The Saints stayed on the front-foot from the start of the second half - at times every player bar goalkeeper Keith Malone was in the Evergreen half as they tried to assert their dominance.

They had a great chance to get back on level terms within minutes of the restart. Working his way into some space, Sonny Okonofor managed to force the ball to the left and towards the incoming Gabriel Ayuri, but he failed to finish from close range.

The Saints were getting closer - Okonofor saw a teasing 52nd minute cross clatter off the top of the bar - but they finally heaved a sigh a relief when their equaliser came on the hour.

The goal proved to be worth waiting for. Chris Connolly was the catalyst, riding a tackle in midfield before slipping the ball out wide to Ayuri on the left. Driving forward, his low centre picked out Okonofor, who cheekily backheeled the ball on for Martin, who smashed an unstoppable shot past Dara Simpson.

That goal was the sign for Mary’s to crank up the pressure even more, but they couldn’t make it count. Martin hit the post with a header, while Vinny Wallace brought a great save from Simpson when it seemed he too would score with 20 minutes to play.

Evergreen were thankful to their young netminder for keeping them in the game - he showed a confidence while under pressure, displaying great handling too. Simpson did well to palm a stinging Connolly free over the bar with eight minutes left but, just when it looked like his side would survive until extra-time, Okonofor hit his late, late winner.