Honours even in city stalemate 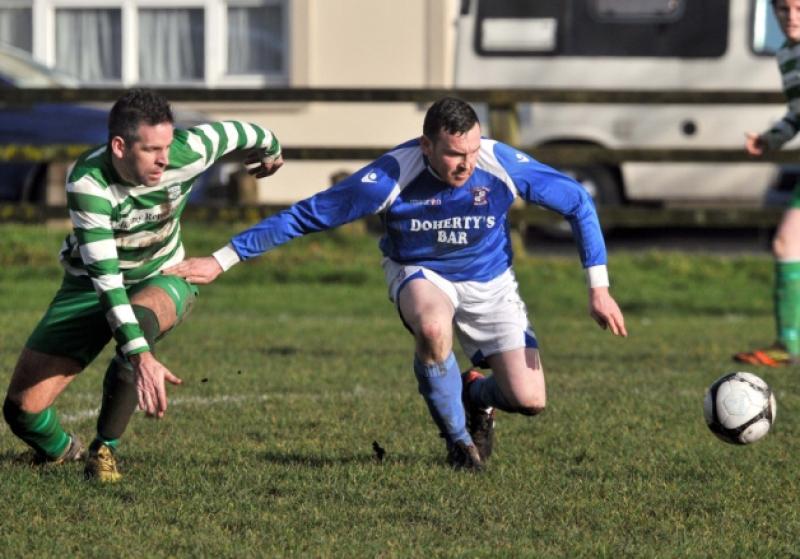 A local derby turned into a city stalemate as Freebooters A and Evergreen A shared the Premier Division spoils on Sunday.

A local derby turned into a city stalemate as Freebooters A and Evergreen A shared the Premier Division spoils on Sunday.

The game proved to be the first draw that the table-toppers had this season, but had a bit of luck gone their way it could have been far from a barren 90 minutes.

Although both sides enjoyed their periods of dominance, when Freebooters had their turn on top they found the frame of the goal to be an obstacle in their bid to stretch their lead at the summit.

The Blues were pushed all the way by Evergreen who, despite losing the return fixture at home, showed no signs of being overawed.

It was the visitors who made the best of the early efforts. It took Mark Owens just six minutes to test goalkeeper Michael Lambert when he guided a shot through a crowd of players.

The netminder saw the ball late, but showed great reflexes to get down smartly to his left and push the ball out.

Evergreen posed plenty of problems for their hosts throughout the first half. With midfielders Oisin Corr and Martin Dunphy keeping a firm grip on the middle third – they had a great battle with opposite numbers Eddie Clifford and Geoffrey Brennan – they kept the ball moving towards their front men.

Up top the duo of Jamie Conway and Adrian Kealy profited from the supply of ball coming their way, but they couldn’t find an end result. Kealy had a great chance when he was played through by Conway’s quick pass on 15 minutes, but his first-time shot flashed wide.

Freebooters weathered the storm in that opening quarter, ending the pressure when they hit back with a great chance of their own. Paddy Cahill went within a whisker of giving the hosts the lead when he stole in at the back post and met James Kelly’s vicious corner, but Cahill’s powerful header finished outside the far post.

It didn’t take long for Evergreen to muster a reply, but their best effort of the half came up just short. In a sweeping move, Seamie Cummins held up play long enough for Dunphy to make a dash in from the right and connect with a low strike, but his 26th minute shot clipped the outside of Lambert’s left post.

The Blues were sparked into action, hitting back – and the post – within seconds. Chasing down a long ball, Damien Raggett showed his marker a clean pair of heels and lobbed the out-rushing Philly Johnston. His shot bounced goalwards but hit the post, giving Evergreen time to scramble the rebound clear.

The spiciness of the tie showed no signs of easing off as the half wore on, but try as they might the sides couldn’t break the deadlock. Freebooters had the best of the remaining opportunities before the interval – Jamie Lynch drilled a shot over, while Philly Johnston was equal to Cathal O’Neill’s curling free-kick.

The hosts had one last roll of the dice before half-time, when Eddie Clifford did well to get on the end of Ger Hayes’s teasing cross, but his header cleared the bar.

The sides renewed rivalries after the restart, but still the barren spell continued – not for the want of trying.

Having hit the frame in the first half, Freebooters rattled the woodwork again just after the hour.

In one of their best moves of the game, neat inter-play between James Kelly, Damien Raggett and Paddy Cahill saw Freebooters work the ball up top before winning a corner.

Sub Nathan West – who added an extra impetus to the charge on his arrival – whipped in a dangerous corner which Cathal O’Neill met perfectly, but his downward header bounced a few yards shy of the line and flew up, clattering the crossbar.

With the new filtering through of how champions Evergreen A were losing away to Thomastown United, Freebooters pressed on for a match-winning goal that would see them take a sizeable lead in the league.

Awarded a free after West was upended in front of the D, Damien Raggett tried his luck from the resulting dead ball but drove his shot into the five-man wall.

The danger wasn’t over, as the Blues recycled the ball on the right. Cahill sparked panic when he sweept in a low diagonal cross that Raggett bundled home, but the ‘goal’ was ruled out for offside.

Undeterred, Raggett went close again with little over 10 minutes left on the clock. Following in on Ger Hayes’s deep free, the striker instinctively stabbed at the loose ball, but Johnston was well-placed to make the save.

The Blues didn’t give up until the final whistle, but still had time to give the crossbar another rattle. Standing over a close range free, sub Dessie Hayes did well to clear the wall but he saw his strike smack back off the bar. West pounced on the rebound, but Johnston made a lightning-quick reaction save to push the ball to safety.