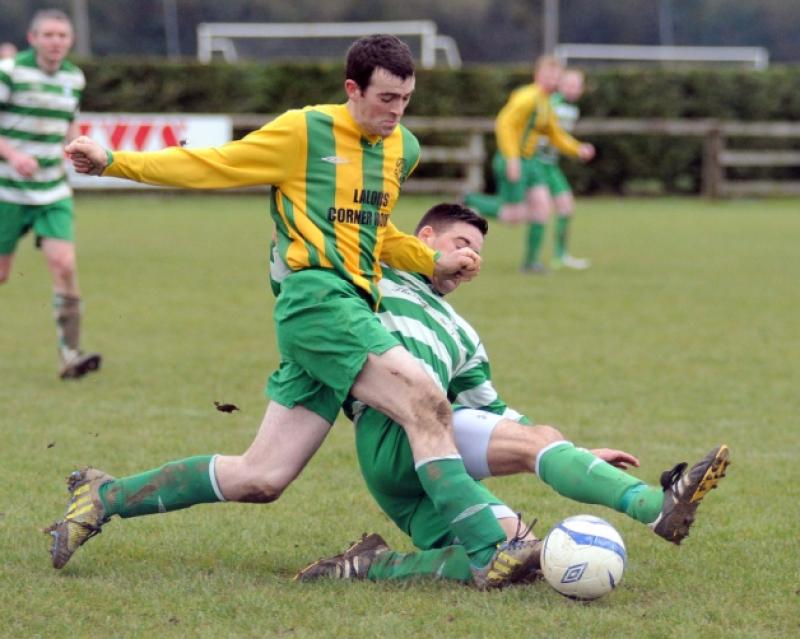 Freebooters A kept up their pace and remain on course in their quest to bring the Premier Division title back to the Fair Green.

Freebooters A kept up their pace and remain on course in their quest to bring the Premier Division title back to the Fair Green.

The Blues grabbed all three points from their trip to Durrow, but their 4-2 win over the Lions wasn’t without its challenges.

The visitors took the lead thanks to a David Rice header, an advantage they doubled when Cathal O’Leary fired home a thumping free-kick.

The city side allowed the Lions to roar back into the game and level matters by the hour mark but, rather than panic, Anthony Hanney’s side hit back. Ger Hayes pushed the Blues back in front before Damien Raggett’s first league goal of the campaign saw Freebooters stay three points clear of Thomastown United A.

Newpark A maintained their 100% home record when they got the better of Bridge United A. Goals from Tommy Donovan, Ger Wall and John Hayes gave the hosts their third home win of the season, leaving them two points behind champions Evergreen A. Sean Murphy scored for Bridge, who slipped to their fourth straight league defeat.

Spa United are still top of the pile in Division One, but had to come from behind to get a share of spoils against Deen Celtic. Ronan Phelan gave the hosts the lead in Castlecomer, an advantage they held for a long time, but Enda Purcell snatched a point for the Johnstown men, who are still unbeaten in the league.

The gap at the top is down to three points after Newpark B beat Callan United 5-2. Braces for Mark Flynn and Martin Doyle, with Darren Hayes adding the fifth, completed the win for the city side who are aiming to secure successive promotions.

A superb revival saw Tullaroan grab a draw away to Freebooters B. Goals from Paddy Kiely and Chris Valentine (2) saw the Blues race into a 3-0 lead, but Tullaroan weren’t done for. With half an hour to play Brendan Burke pulled one back, followed by sub Tom Fitzgerald’s crashing volley.

Fitzgerald then turned provider, delivering a corner which Burke finished to earn his side their second draw with ’Booters and extend their unbeaten run to four games - they’ve picked up eight points from the last 12.

Meanwhile a second half rally saw Southend United get the better of Stoneyford. Kieran Bergin’s 65th minute opener was followed by an 80th minute strike from player-manager Michael Carroll. A Paul Shefflin header capped the victory, moving Southend back to third in the table.

Away from the local game Chris Whearty (2) and David Grincell helped Evergreen beat Brayzil 3-0 in the Leinster Junior Cup. The ’Green were the only local winners at the weekend - Fort Rangers went down 7-1 away to O’Devaney Dunard while Navan Cosmos beat Thomastown United 3-2 after extra-time.