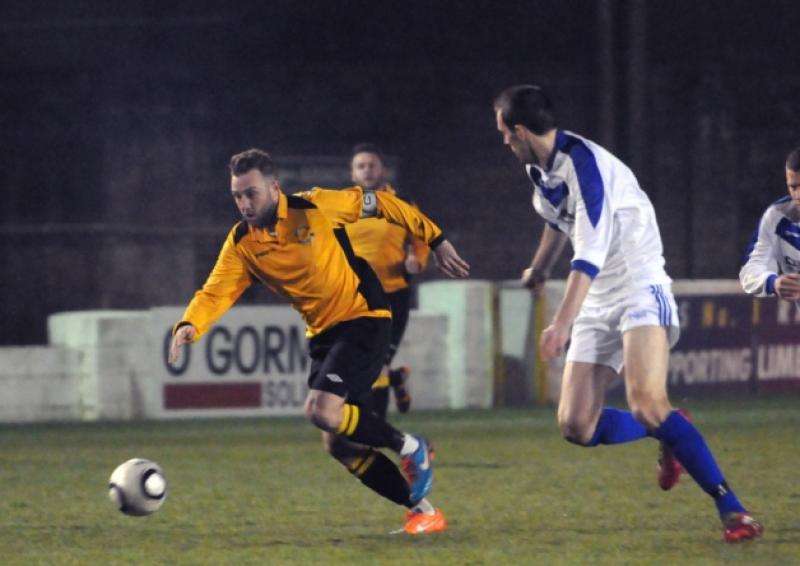 Was it the curse of playing on Friday the 13th? Perhaps not - but luck wasn’t on the Kilkenny & District League’s side under Jackman Park’s lights.

Was it the curse of playing on Friday the 13th? Perhaps not - but luck wasn’t on the Kilkenny & District League’s side under Jackman Park’s lights.

Ollie Walsh’s men saw their Oscar Traynor campaign come to a halt as Limerick advanced to the final four at their expense on Friday night.

The hosts were far more clinical where - and when - it mattered most. Limerick were sharp when they stepped into attack mode, picking the perfect time to take the lead and then double it.

The first goal was pure pressure from the Munster men, but the second was a kick in the teeth for the Cats.

A goal down at half-time, Kilkenny stepped up the pace after the restart and put their rivals under the cosh.

Driving through the middle, they asked questions of the Limerick defence. Emmet Nugent, Paddy Cahill and Mick O’Neill had bites at the cherry, but the equaliser they craved failed to materialise.

The game had just ticked over the hour mark when the hosts drove what proved to be the final nail into Kilkenny’s coffin.

That little slice of luck Kilkenny wanted went Limerick’s way when they lifted the siege that had been under and broke forward. Target man Shane saw a snappy pass go a little astray when trying to control it, but the ball broke favourably for Craig Madigan.

Racing into the box, Madigan shot low but netminder Robbie Lynch was equal to his effort, racing out to block the shot.

The danger wasn’t over, as John Connery seized on the loose ball out on the left. He had time to look up and fizz in a low ball, Madigan adding the finishing touch from inside the six-yard box.

There was still half an hour left, but Kilkenny were left with a mountain to climb.

Things weren’t much easier for the Cats from the start, although skipper David Grincell did sound an encouraging warning when he ended a great break with an early shot from distance.

However, once Limerick got to grips with things in the middle they quickly turned things their way. Paddy Cahill had to be at his best to force Aled Harkin’s dangerous cross out for a corner. Netminder Robbie Lynch went one better, producing an excellent save to deny Shane Clarke after he had been played through by Craig Madigan’s defence-splitting 15th minute pass.

Clarke was involved again soon after. Playing at the top of Limerick’s attack he continued to hold play up until support arrived. One such move saw him release a tidy ball into the path of Mike O’Gorman, but Lynch was happy to watch his raking 19th minute shot flash wide of the far post.

Lynch was by far the busier of the two goalkeepers - he made a good save from Eoin Hanrahan, then saw Clarke’s low 21st minute effort zip wide of the far post. However, he could do little to prevent Limerick from taking the lead 60 seconds later.

In a move started by towering defender Kieran O’Connell, Limerick went from back to front with pace. O’Connell’s header was controlled by Mike O’Gorman, who played a quick one-two with Clarke before taking down the return pass and slotting it past the Kilkenny ’keeper.

The goal spurred Limerick on, but they couldn’t double their newfound lead. Lynch was back in action, turning a Hanrahan shot around the post, before comfortably gathering Clarke’s tame header from the resulting corner.

Things looked grim for Kilkenny, but a quick reshuffle saw them get back into the game. With Emmet Nugent switching wings and Ben Ryan dropping into midfield Kilkenny began to get a hold on the central third and, with it, work the ball around as they strung good moves together.

Their first real attack of the opening half almost yielded a spectacular equaliser.

It seemed as if Paddy Cahill’s long diagonal ball had too much weight on it for David Grincell, but the captain gave chase and caught up in the corner. A lovely piece of skill left Kieran O’Connell rooted to the spot, giving Grincell time to dash along the end-line towards the box, but his shot from the narrowest of angles flashed wide of the far post.

Grincell had another pop at the target as half-time loomed. Chasing down David Rice’s clearance he used his strength to outmuscle O’Connell on the left, but although he cut inside his long-range shot never troubled netminder Gary Neville.

Limerick came back swinging from the restart, putting the squeeze on the visitors and forcing them into a more defensive mode.

The pressure almost led to a second goal, Eoin Hanrahan taking a quick throw and then, with the return pass, whipping in a vicious cross. Stealing in on the blind side of his marker, Shane Clarke pounced on the cross, but failed to make the proper connection as he miscued his sidefoot shot.

Kilkenny came back into it after that, working hard as they tried to force their way back into the game. Ben Ryan had a pop at the target when he whipped a 61st minute free over the Limerick wall. His delivery had Gary Neville scurrying across his line, but the ’keeper was relieved to see the ball finish outside the top right corner.

Ryan was involved again soon after, carving Limerick open when he threaded a perfectly-weighted pass for Emmet Nugent. His pace took him well clear of Aled Harkin, but Neville burst out of the six-yard box to smother the shot.

That save became all the more important to Limerick when they broke forward and doubled their lead soon after. The second goal was a blow to Kilkenny, who were fortunate not to concede even more to the strong-finishing hosts.

Pressing for more goals, Limerick almost grabbed a third when Shane Clarke got on the end of Mike O’Gorman’s cross, but Ben Ryan was well-placed to clear the header off the line. Robbie Lynch was also called into action, making a superb save to beat away a swerving long-range Craig Madigan strike with 72 minutes on the clock.

Kilkenny might have been staring defeat in the face, but they were determined to fight on. Sub Steven Connolly saw his glancing header flash wide from a long Tommy Earls throw-in, while C.J. Browne had a late toe-poke finish narrowly off-target.

It was a fighting finish from the Cats, but their Oscar dream was over.