Morton has a Cian eye for goal! 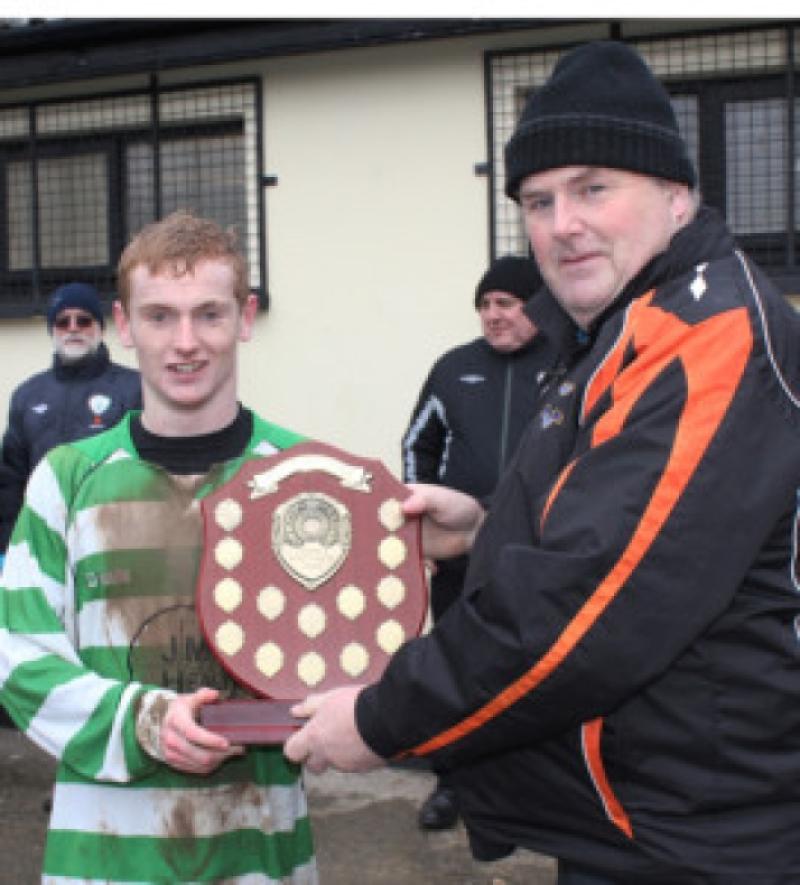 IF SUNDAY was St Patrick’s Day, then Monday was most certainly Cian’s Day!

The Cian in question - Evergreen striker Cian Morton - was the toast of Derdimus on Bank Holiday Monday, as his four-goal haul helped the Kells Road club romp to the Henderson Youths’ Shield title.

In what has been a season to remember for the teenager (he has also played with the Kilkenny youth and junior inter-county teams and is on the brink of winning a Premier Division medal with Evergreen A) Morton simply ran the show as he destroyed the hopes of cross-city rivals Freebooters with a man of the match display that saw the young ’Greens complete a Shield treble for their club (women’s, juniors and youths).

Proof, if any was needed, that Morton had a keen eye for goal came within seconds of kick-off. Chasing and harrying after the ball he sped into the Freebooters half to block down a defender before firing off a shot from the edge of the box, but his effort was well held by Blues netminder Jason Mahony.

You could hardly say it was a wake-up call to Freebooters, but they paid heed to it nonetheless. Twenty seconds later they mounted their first attack - and took the lead from it. Midfielder Aaron Molloy carved Evergreen open with a delightful ball for Frankie Nolan. Moving to the left corner of the box the striker controlled the pass, then picked his spot in the far side of the net with a curling shot.

The goal gave ’Booters a real confidence boost and they used it to good effect, dominating possession to create more scoring opportunities. Gavin Clifford worked well down the right to help Jason Hennessy waltz into the box but his 10th minute shot was well blocked by the ’Green defence. Nolan went closer still, almost doubling his tally on 12 minutes when he knocked a long ball past the advancing Brian Busher, but Eddie Teehan got back to clear the ball before it crossed the line.

Having survived those scares Evergreen set about getting back into the game on the attacking front. Morton went close again when he put the Freebooters defence under pressure and chased after a ball which was headed back to Mahony, but the netminder made a fine stop with his foot.

There was little he could do about Evergreen’s equaliser, which came Ben Hickey fizzed in a dangerous corner in the 25th minute. Mahony got his hand to the ball but with the in-rushing Morton practically in his face he couldn’t stop the ball from spinning into his own net.

That was the breakthrough Evergreen and Morton needed. Within 20 minutes they all but had the game under wraps. Morton bagged his first goal in the 27th minute, using his speed to burst past two defenders and chase down a long ball before skilfully rounding Mahony and slotting home from close range.

It was 3-1 just after the half hour mark, as Evergreen turned defence into attack. Booting a Blues corner clear, the wind sent the ball soaring into the Blues half. Morton was quickest to react, speeding past his markers before chipping Mahony from the edge of the box.

Morton’s memorable afternoon got even better when he completed his hat-trick within 16 minutes. Once again his pace did the trick, Morton racing in after Jamie Conway headed a Busher kick-out on for his colleague before deftly beating Mahony.

Freebooters’ afternoon went from bad to worse as they fell even further behind seconds before half-time. Again, the goal came from one of their attacks, Clifford bringing a good save from Busher with a strong shot. From the kick-out Morton and Hickey made nuisances of themselves before the ball fell to Hickey, who fired home a sweet shot high into the left side of the net.

Credit to the Blues, they refused to throw in the towel in the second half. Aaron Molloy gave them a glimmer of hope - and added to a day of top class finishes - when he rifled home a stunning free-kick off the underside of the bar with 14 minutes to play.

However, the day belonged to one man. Morton rounded off an immense performance when he grabbed his fourth and Evergreen’s sixth in the 87th minute, sidefooting home after Hickey’s excellent cross from the wing.