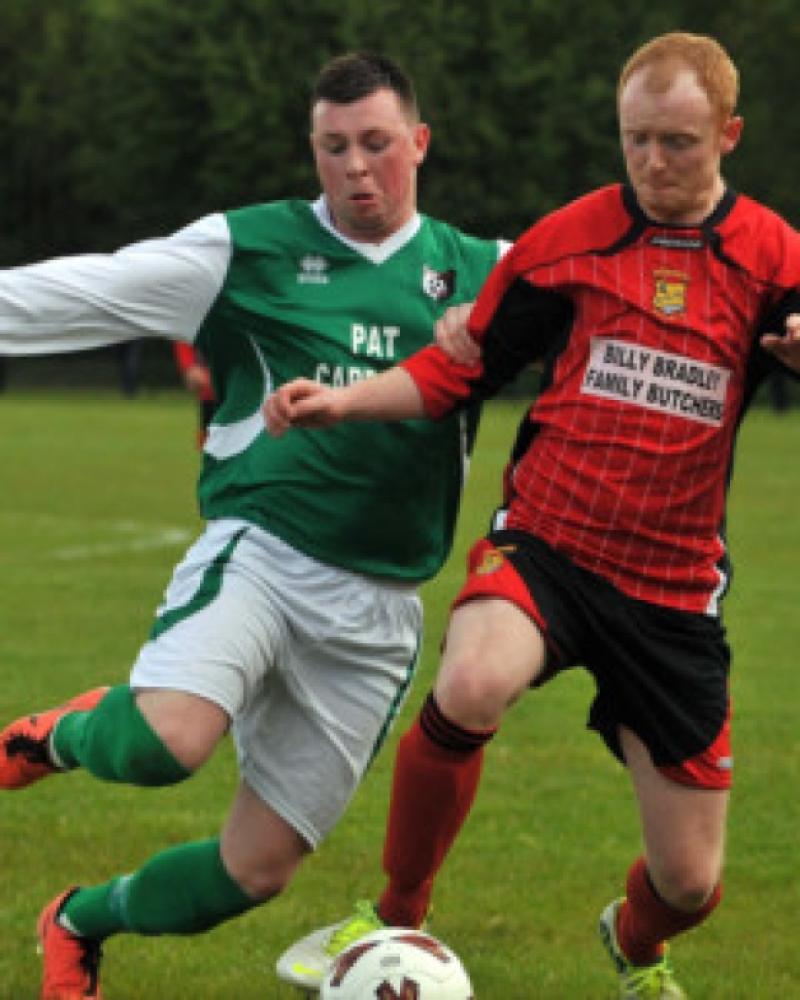 THE PAIN OF last season was washed away as Newpark A finally got their hands on the McCalmont Cup.

Beaten finalists in 2012, the city side made sure they left Derdimus with the spoils this time by getting the better of a battling Brookville on Sunday.

Fitting for a club celebrating its 20th anniversary, it was a long-serving player who nabbed the winner.

Shane O’Neill ensured the celebrations went off with a bang, scoring the only goal of the game as Newpark became the 25th team to lift the blue riband prize in Kilkenny junior soccer.

The moment the players and their large band of supporters had been waiting for arrived with 20 minutes left on the clock.

Henry O’Neill created the opening with a quick throw before Tommy Comerford worked an angled ball into the box towards O’Neill.

The winger got a rub of the green as a deflection took the ball into his path.

He got another when he failed to make a proper connection with his first shot, making good second time round with a close range finish.

The goal was greeted as if a huge weight had been lifted off Newpark’s shoulders.

Having come so close to the title last year, Mark Ryan’s team were like a side possessed as they fought their way back to this year’s decider.

The intention to go one better than last season didn’t take long to shine through - the game had only just kicked off when Ger Wall collected Tony Delaney’s crossfield pass and dashed into the box, but his shot crashed into the side netting.

Many expected Newpark to dominate Sunday’s final, but they hadn’t reckoned on Brookville making life difficult.

The Division Two club may have been outsiders but, as they showed when dethroning last year’s champions Callan United in the semi-final, they weren’t afraid of the underdog tag.

Stephen Ruth gave Newpark a fright with a second minute snapshot before Billy Irwin kept the pressure on.

The winger was in the right place to race on to Alan Ruth’s fourth minute header, clipping a long-range shot at the target, but his effort flashed wide.

Stirred into action, Newpark went close to breaking the deadlock as early as the eighth minute.

Sparked by John Demecz’s clearing header Shane O’Neill picked up possession and sprinted down the left wing, pausing only to whip a low ball across the box.

A cheeky move from Tony Delaney, who let the ball slip through his legs, caught Brookville cold.

It fell to John Hayes, who had time to steady himself and shoot, but netminder J.J. O’Sullivan got down low to his left to make a fine save.

It wasn’t all one-way traffic after that. Stephen Ruth proved as much when he clipped a first-time shot around the post, but of the two goalkeepers J.J. O’Sullivan was seeing a lot more action.

Henry O’Neill went closer nine minutes later, beating a four-man wall with a wicked free-kick, but O’Sullivan was right behind the ball.

Even when O’Sullivan was beaten, the frame of the goal came to Brookville’s rescue.

Stephen Dawson went close to giving Newpark the lead when he got his head to John Hayes’s 28th minute free, but his effort clipped the base of Sullivan’s left post.

Newpark were beginning to turn the screw, but for all their efforts they couldn’t find an opening. Much of that was down to O’Sullivan, who thwarted the city side with a super double save in the dying seconds of the half.

It looked like Newpark had finally worn Brookville down when Shane O’Neill split the Ballyragget defence as he latched on to John Hayes’s looping pass, but O’Sullivan raced from his line to smother the shot.

The danger wasn’t fully over, as the rebound fell to Tony Delaney. For a split-second he was faced with a gaping goal, but O’Sullivan got to his feet to make the reflex save.

That wasn’t the last chance Newpark would have to go in with the lead at half-time, but it was the closest. Shane O’Neill had one final bite at the cherry in injury-time when, following a great break from John Hayes, Henry O’Neill whipped in a great cross from the right, but the elder O’Neill glanced his header wide.

Newpark kept the pressure on in the second half, but the Brookville goal seemed to be impenetrable.

J.J. O’Sullivan showed good hands to hold on to a long-range Henry O’Neill free, while John Hayes sent another effort from a dead ball curling through a sea of players but saw the ball spin agonisingly wide of the far post.

Brookville used up another life when Newpark struck the post - again - in the 55th minute.

Tommy Comerford had the chance, beating O’Sullivan with a quick shot that flew under the diving goalkeeper, but he was relieved the hear the ball clatter off his right hand post before it bounced back out into play.

That was a huge let-off for Brookville.

Having fallen out of the game for a spell they redoubled their efforts after that scare, pushing back into attack.

Stephen Ruth had a good chance, putting a strong shot on the end of a good turn, but Bobby Maher did well to hold the 59th minute shot.

The Division Two side pieced another good move together after the hour mark. Billy Irwin, John Doheny and Alan Ruth combined well through the centre as they poured forward, but Ruth’s shot flew over the bar.

Brookville went closer still to opening the scoring on 67 minutes, albeit in bizarre circumstances.

Newpark almost put through their own net when sub Gary O’Keeffe’s free-kick deflected off a city defender, spun over Bobby Maher and towards goal.

The ball flew in front of Alan Ruth, who connected with an instinctive header, but his angled effort went straight to the grateful Maher.

It was beginning to look like Brookville were poised to come with a late charge, but Newpark were about to burst their bubble. Within minutes Shane O’Neill had netted the winner.

Minutes after that, celebrations that had been put on ice 12 months earlier were in full flow.