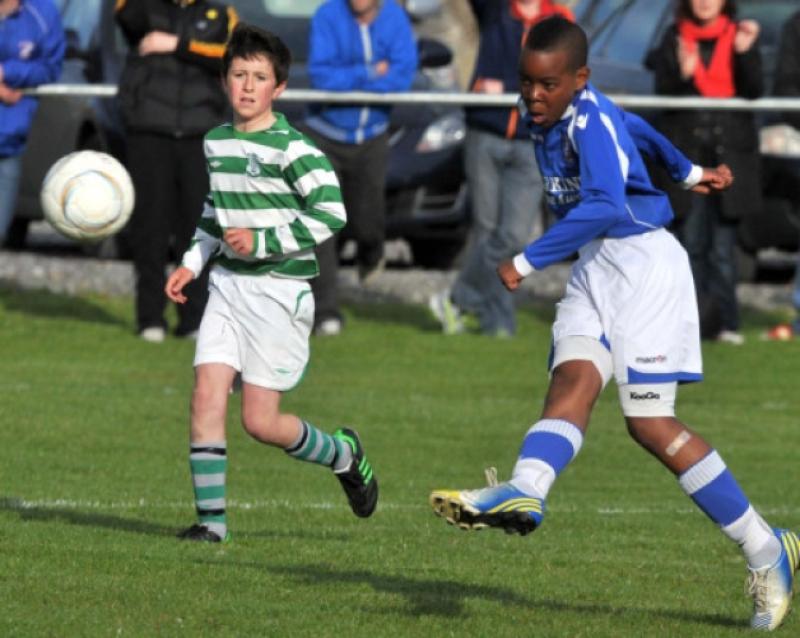 A QUICK BLAST of goals saw Freebooters A give a five-star performance and land the Under-12 Nicholas Marnell Cup.

The young Blues were too sharp for city rivals Evergreen A to contend with at Derdimus on Friday, racing into a commanding lead they would never let go.

’Booters were quick off the mark when it came to showing their attacking teeth. It took just three minutes for them to break down the right, midfield general Cian Kenny, Niall McEvoy and Leon Hayes linking up well before Eoin Guilfoyle tried a shot but netminder Michael McInerney made a fine save.

The Blues came out with all guns blazing and made it count with just nine minutes on the clock. Jim Ryan made the opening, taking a Kenny ball and sending Success Edogan on his way. The striker beat his defender, then chipped a high shot over McInerney.

Ryan, who played a big part in that opening goal, was involved in the second strike six minutes later. He played a neat one-two with Guilfoyle, getting the ball back before standing up a cross for the incoming Jack Sheridan to head home at the back post.

Freebooters’ evening got even better when they made it 3-0 to cap a blistering nine minutes. Leon Hayes grabbed this one, firing in a free from the right wing that dipped at the last second and dropped into the net under the bar.

Evergreen were stunned by that salvo, but tried their best to pull something back before half-time. Peter McInerney had a great chance when he sped on to Ronan Lavelle’s threaded pass and beat Cian Russell, but his shot rolled narrowly wide of the far post.

It took Freebooters just five second half minutes to all but wrap up the trophy. Leon Hayes was the architect, racing down the right before pulling the ball back across the box. His delivery fell to Eoin Guilfoyle, who chested it down before slotting a low shot home.

Evergreen kept on attacking, but couldn’t hit the net. Sub Ross Ellis went close with a raking shot that flashed wide, while Conor Egan brought a brave save from Cian Russell.

The evening, however, belonged to Freebooters, who completed a memorable final with a fifth goal 10 minutes from time. Keeping Evergreen pegged back in deep, the Blues got their reward when Nathan Fitzpatrick closed down a clearance before teeing up fellow sub Craig Cahill to steer home from close range.