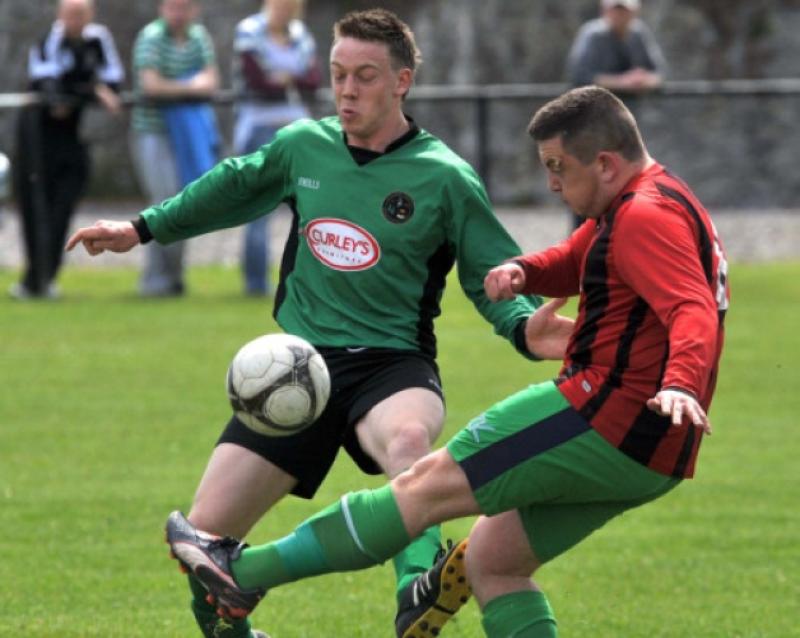 IT WAS AN afternoon of history-making and silver-taking as the youths from Clover United ended their season on a double note of success.

The young men from Rathdowney were cool under pressure, coming back from a goal down to beat Freshford Town to land the Buckley Youths’ Cup, the second half of a league and cup double.

That was the silver. History was made in the manner of their win, as it took 13 rounds of penalties to separate the teams, making it the longest penalty shoot-out on record for the watching League officials.

Neither side could get the edge in their five regular kicks, although Clover had netminder Simon Kinsella to thank after he saved Cian Hughes’s penalty to leave the sides at 4-4 and send Saturday’s Cup final at Derdimus to a sudden death finish.

David Poyntyn and the impressive Harry Burke converted their kicks, as did Darragh Fitzpatrick and Shea Burke. The game became 7-7 when Eoin Fitzpatrick and goalkeeper Adam Garrett found the net, but still the drama continued.

It was advantage Freshford when Jake Creagh’s penalty was saved, but Kinsella rescued his side when he beat away Hakim Crosby’s effort.

The drama continued into the tenth round of penalties, Garrett doing well to turn back from his dive and get his hand behind Darragh Carroll’s kick and stop it crossing the line. The title was again within Town’s grasp, but once more Kinsella pulled his side back from the brink of defeat by stopping Jack Dunphy’s low drive.

The closeness of the game wasn’t something that had been limited to the final stages; the game began with a similarly tight feeling as both sides opened in a cagey manner.

Division Two runners-up Freshford were first to have a go, Mark Webster linking up well with Eoin Vaughan on the left. Vaughan showed clever feet to cut back in front of the box, but the striker fired his 10th minute shot over the bar.

Clover, the Division One champions, took a little longer to find their feet. After Kieran Bowe’s 14th minute shot was forced wide by netminder Adam Garrett Shane Bowe fired a teasing corner across the box. The delivery needed the slightest touch to go in, but no United player could profit.

That missed chance became very costly when Town went in front just two minutes later. James Sweeney went up for Shea Burke’s long free, knocking it down in front of Vaughan. The striker had time to take a touch, then deftly picked his spot inside the left post.

Clover were rocked by that goal, taking their time to get back into the game. Kieran Bowe had their best chance to find an equaliser on 35 minutes when he got on the end of Jimmy Fox’s whipped-in corner, but his glancing header flashed wide of the mark.

They almost fell two goals behind within a matter of minutes - not for the first time had they Kinsella to thank for keeping them in the game. Vaughan almost doubled his tally and Freshford’s lead when he unleashed a venomous shot, but Clover’s ’keeper got down smartly to turn the ball round his right post.

United raised their game in the second half, but couldn’t find a quick equaliser. Shane Bowe very nearly got it when, in the 50th minute, he beat the offside trap and raced on to Darragh Fitzpatrick’s long ball down the right. With Garrett racing from his line Bowe showed a cool head to chip the ball over the ’keeper, but his effort finished just outside the far post.

Clover kept pushing on, getting their reward on the hour. Awarded a free inside the D, sub Eoin Fitzpatrick gave Garrett no chance with a thumping drive that split the six-man wall and screamed into the net.

The goal revived Clover, who kicked on in search of a winner. Shane Bowe thought he had found one in the 67th minute when he gathered a pass from Ray Bowe and rounded Garrett, but the winger was forced to go wide. He still got his shot off, but Garrett had recovered by then to make the save.

Freshford also had some opportunities to prevent extra-time. Mark Webster lashed a shot into the side netting with 11 minutes to go. Liam Hickey went even closer four minutes from time, clipping a long-range shot that looked like dipping under the bar. Simon Kinsella saw it late, but did well to finger-tip the ball over the bar.

Clover stepped up their efforts again in extra-time, but couldn’t make that final step. Sub Darragh Carroll thought he had scored the winner but saw his 97th minute ‘strike’ ruled out for offside. Kieran Bowe thought he had done the same three minutes later thanks to a stinging drive that rocketed towards the net, but Adam Garrett dashed his hopes with a great save.

In the end, the Cup was decided by penalties - but not before a lot of them were taken! Both sides went through their entire roster of 11 players, Kinsella and Richie Tobin (Freshford) taking those final kicks to make it 8-8.

It was 9-9 when Tom O’Malley and Liam Hickey both converted their second penalties of the shoot-out. Sean Delaney hit the second for a second time with his low drive, but when Webster narrowly shot wide the trophy was Clover’s.