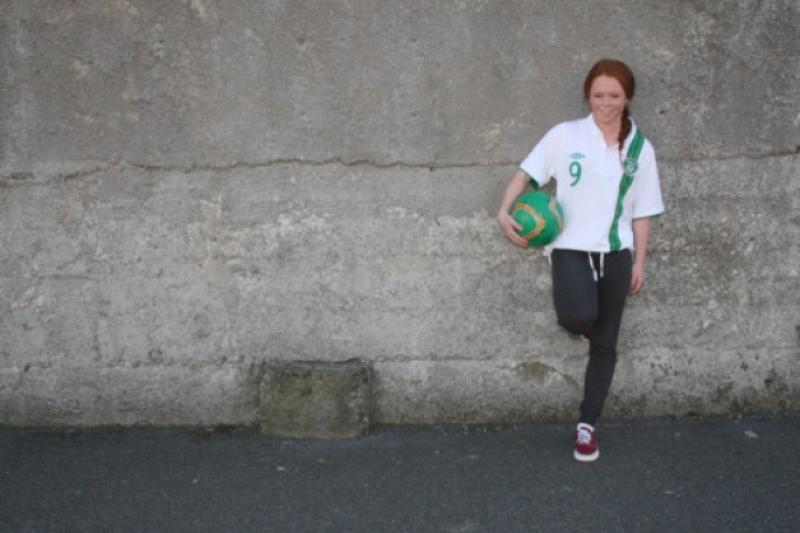 It’s been a hectic few months in the life of Jenny Clifford, Kilkenny’s latest international soccer star - but she wouldn’t have had it any other way.

It’s been a hectic few months in the life of Jenny Clifford, Kilkenny’s latest international soccer star - but she wouldn’t have had it any other way.

The St Joseph’s Road native, who honed her skills with Barry O’Neill’s Evergreen, was a shining light for the Republic of Ireland over the last few months.

Jenny, a daughter of Michael (formerly of Freebooters) and Statia Clifford, first came to Irish under-17 manager Dave O’Connell’s attention when she played with the Republic of Ireland’s under-16s in the Development tournament who took on Wales, Belgium and the Czech Republic in May.

“We played Czech Republic, Belgium and Wales,” she recalled. “It seems like a long time ago now, but it was my first time playing with the national team. It’s been amazing how quickly it all came about.”

After that, the call came to step up to the under-17 level ahead of Ireland’s involvement in the UEFA women’s under-17 championship qualifiers in Russia in August.

“We were all brought up for trials before the squad was cut down to 22 players,” she said. “The week before the tournament we went to Carrickfergus for a friendly against Northern Ireland before the panel of 18 players was picked to go to Russia. I was delighted to make the squad.”

But what’s it like getting an international call-up? How do you find out you’re in?

“They send out emails, telling you what day you’ll receive it,” she said. “When the date comes around you’re waiting all day for that mail to come in! You’re up first thing in the morning, checking your mail all day. That’s what it was like for the trip to Russia, but I was in school when the squad for Romania was announced so I had other things to keep me busy!”

It was a long way to go to play games, but while in Russia Clifford helped Ireland make a bit of history.

“We set a new national record for the highest score set by an Irish team when we beat Bosnia 12-1 in our opening game,” she said proudly. “It seemed like everything we hit went in that day. We were focused on making a good start to the group - if we’d lost it we would have been under pressure for the last two games - so we knew a win would give us a good start.”

A 1-0 win over Turkey in their second game meant Ireland had already qualified for the Elite Phase before they took on hosts Russia in their last game, giving them the luxury of relaxing and enjoying the game.

“Knowing we had already qualified was great - it was the best feeling ever,” she said. “Playing in Russia wasn’t too bad as we arrived a day before the other teams so we were used to playing in the heat. A few weeks after the Russia game we were called in for more training, with extra players called in to make sure every player knew their place wasn’t guaranteed for Romania.”

Playing in the Elite Phase, which included top seeds like Spain, France and Germany, was another step up for Clifford and her international colleagues.

“We were very focused for the Spanish game as we knew it was going to be tough,” she said of Spain, who won the UEFA Championships in 2010 and 2011. “We did a lot of work before the game, going through our tactics for the match.”

“There was a small bit of pressure as we knew we’d have to play well if we were to beat them,” she added. “No-one could afford to have a bad game.”

Disaster struck for Ireland when they went two goals down, the second coming in the 33rd minute. However Clifford led the Irish comeback when she pulled a goal back inside 60 seconds.

Getting the goal was a moment to remember for Clifford - but what’s it like to score for your country?

“It was an amazing feeling - I was almost crying with happiness!” she said, smiling at the memory. “I remember everything about the goal. The ball was played up in the air to Megan Connolly, who slipped a pass between the left full-back and the centre-half. I just ran on to it and scored. I knew as soon as I’d hit it that the ball was going in.”

Despite the Spain loss the Irish side remained positive they could advance.

“We felt we had played well against Spain, despite the results, so we felt we could beat the other two teams to keep our chances of qualifying alive.”

Ireland would go on to record two more wins, beating Iceland 2-1 and Romania 4-0, but a knee injury against the Spanish cut Clifford’s tournament short.

“I had an injury before the tournament but recovered in time for Romania,” she said. “However, in the Spanish game I clashed shins with an opponent and my knee went again. It was frustrating - it was tough watching from the sidelines. You’re more nervous there than you are playing in the games.”

Scoring the two wins gave Ireland a chance to make the UEFA finals as a best runner-up, but the squad were left disappointed last week when they learned that Norway’s 7-1 win over Hungary knocked them out of the running on goal difference.

“We felt our chances of making it were very high, but it was tough hearing that we hadn’t qualified,” she said. “Losing out on goal difference was hard.”

While the competition is now over, Clifford will be kept busy tackling a new challenge.

Clifford has moved on at club level too, joining Wexford Youths in the Women’s National League.

“That has been a big challenge,” she said. “The standard in the national league is tough. There is such a high level of player, with a number of the Irish senior side playing with the likes of Peamount and Raheny (a group that include’s Kilkenny’s Karen Duggan), which makes it tougher.”

Even more remarkable, Clifford is juggling all this with her schoolwork. A fifth year student at the Loreto, where she also won an All-Ireland schools soccer final this year, means she has her hands full at present.

“It’s tough keeping it all together,” she said. “When I came back from Romania I had to catch up on so much homework!”

So while she will have some quiet time now, but Jenny has already set her sights in reaching more goals.

“Hopefully I’ll be back playing with Wexford before Christmas,” she said. “After that I’d love to be playing for Ireland again soon.”