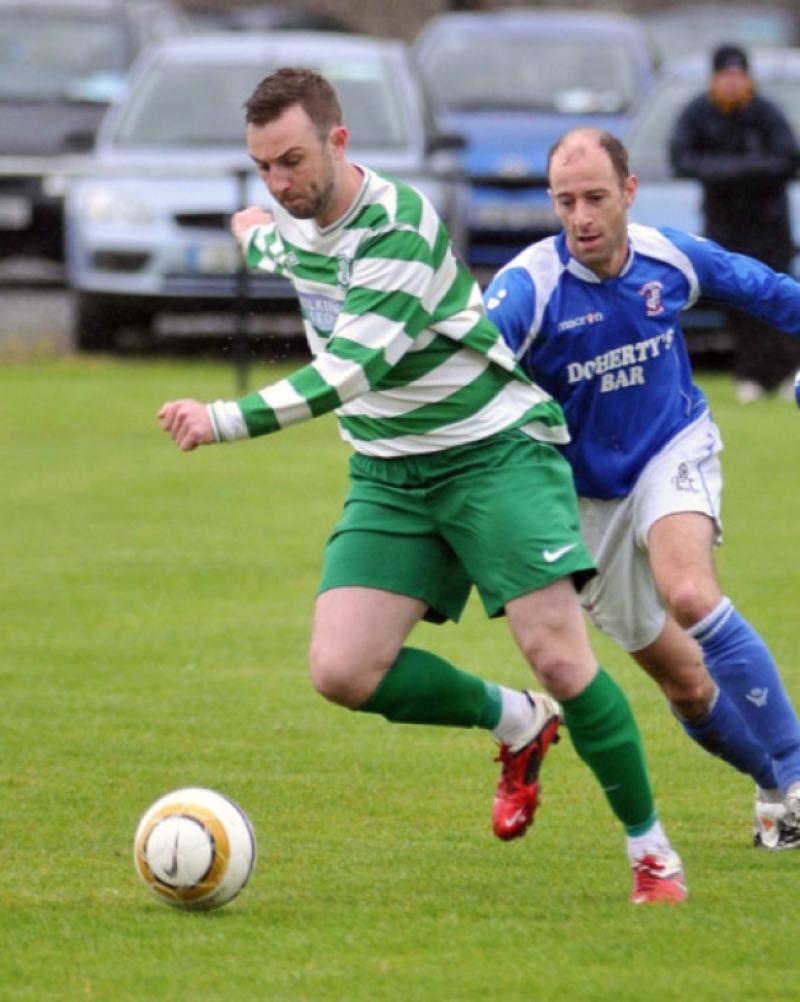 An ice-cool finish from Paddy Cahill saw Freebooters A win a red-hot Saturday night derby and march into the McCalmont Cup final.

An ice-cool finish from Paddy Cahill saw Freebooters A win a red-hot Saturday night derby and march into the McCalmont Cup final.

Midfielder Cahill was one of the Blues’ saviours, firing home a sudden death penalty to help Anthony Hanney’s side see off old rivals Evergreen A in a tight clash at Derdimus.

While Cahill provided the finishing touch, his goalkeeper Donal Brennan was another of ’Booters heroes. He saved Damien Kelly’s kick in regulation penalties, then guessed the right way to push Eoin McGovern’s sudden death effort around the post.

It was a great end to an evening which began in similar fashion for Freebooters, who took just eight minutes to go in front.

The Blues were rewarded for some early pressure when Damien Raggett got up to nod Ger Hayes’s menacing corner into the net.

With Geoffrey Brennan and Paddy Cahill keeping a grip on midfield Evergreen struggled to get into their fast-paced rhythm in the first half, but did raise their game to draw level three minutes from half-time.

Mark Slater, a solid performer throughout at left-back, started the move by winning a towering header.

The ball was nodded on by Niall Andrews, splitting the Booters centre-halves, giving Brian Jordan time to race on and prod the ball past the advancing Brennan.

Jordan had a chance to double his tally just three minutes later, ghosting in behind the defence to get on the end of a teasing Slater diagonal cross, but he glanced his header outside Brennan’s left upright.

The second half saw the game increase in tempo, but goals were not forthcoming.

The introduction of Damien Kelly to midfield - as well as sparking displays from youth players Ben Hickey and Eoin McGovern - strengthened Evergreen’s resolve.

That forced Freebooters to change their game, the Blues bringing Damien Raggett back into a deeper role to offset the extra traffic through the centre.

The game opened up after that in terms of pace and chances, but impressive goalkeeping displays at both ends of the field meant the sides couldn’t be separated.

Donal Brennan was first into action, stopping Chris Whearty’s low 51st minute shot at his left post. Pierce Dargan had a go next, stretching back far enough to palm Geoffrey Brennan’s powerful 55th minute header out for a corner.

Brennan did well again on the hour, diving to his right to turn Sean Barcoe’s daisy-cutter around the post. Barcoe had another bite at the cherry from the corner, but his header clipped the bar.

The game was steadily developing into a battle of the netminders, both of whom kept their sides in the game. Strikers David Grincell and Damien Raggett both saw chances beaten away by the Number Ones.

And, when Dargan was beaten, the frame of the goal rescued Evergreen.

Dessie Hayes had a chance to settle the game late in the day when, following a drive through the centre by Raggett, the ball was deflected into his path. Hayes saw his chance and took it, but his 87th minute strike clattered off the bar.

’Booters went closest to snatching a winner in extra-time, with both Hayes and Raggett letting fly from close range, but again Dargan proved unbeatable. Their tempo dropped after Geoffrey Brennan was dismissed for a second yellow late on, leaving both teams to settle for spot-kicks.

It was advantage Evergreen when, after two rounds, they led 2-1 thanks to Dargan’s save to deny Dessie Hayes, however parity was restored after Brennan beat out Damien Kelly’s powerful kick and Jack Deegan netted his.

The sides were locked at 4-4 after Chris Whearty, Aaron Molloy, Niall Andrews and Ger Hayes scored. That sent the tie to sudden death - Brennan and Cahill did the rest...