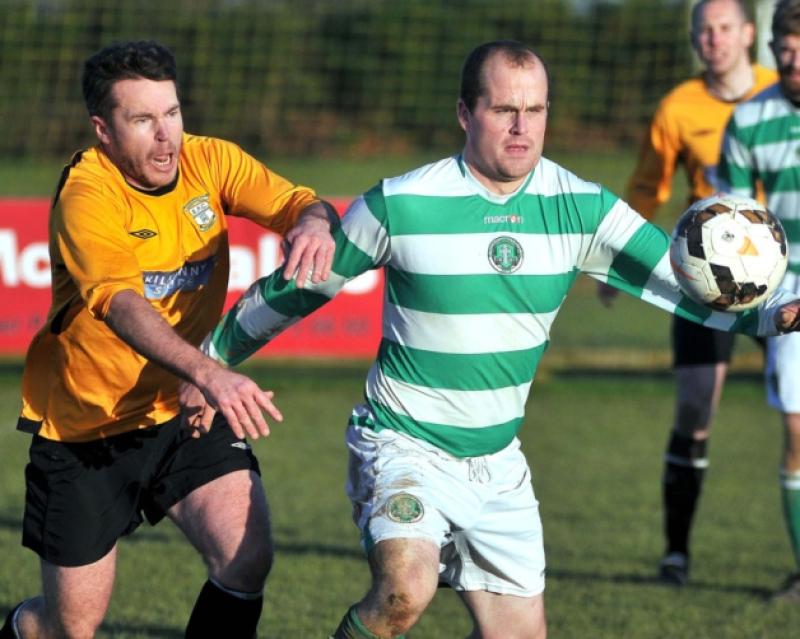 A fast start and an equally speedy finish saw Evergreen march confidently into the last 32 of the FAI Junior Cup.

A fast start and an equally speedy finish saw Evergreen march confidently into the last 32 of the FAI Junior Cup.

A goal at the very start of the match, coupled with a treble in the closing stages, saw Packie Holden’s side dismiss North Tipperary’s Streamstown Celtic.

The city side wasted little time stamping their authority on the game. In fact, they did just that from kick-off!

As soon as the ball was rolled into his path, David Grincell made a break for the Streamstown goal. Driving through the Celtic defence he blazed a trail to the target, but although his shot beat netminder Jason Ryan the ball cannoned off the far post.

The danger wasn’t over, however, as Niall Andrews pounced on the rebound. He took a touch, then hammered it high into the roof of the net. There were just eight seconds on the clock.

The goal lit up the Kells Road, giving the home support something to warm them up on a chilly Sunday afternoon. However, their expectations that the floodgates would open failed to materialise.

Stung into action, Streamstown began to take the game to their opponents. Brian Franks gave Evergreen notice they wouldn’t have it all their own way when he hammered a sixth minute free at the target, but Holden was well-placed to make the save.

They went close again a few minutes later, finding an opening from another set-piece. Darren Wrenn’s free was deftly taken down by Paul Doyle and into Brian Kirwan’s path, but he lashed his shot over the bar.

With Streamstown making life difficult in the middle third it took Evergreen, who also lost David Grincell to an early injury, some time to force their way through on goal again. They were almost gifted a second goal when Craig Byrne’s stray pass was seized upon by Conor English.

The midfielder picked out Ciaran Snype, but although the sub dashed through on goal Jason Ryan raced from his line, forcing Snype to pull his shot wide.

Snype was involved again in the 26th minute, as Evergreen pressed for a second goal. In a bright move which was started by Damien Kelly, Snype teamed up with Chris Whearty with a one-two that cut Streamstown open, but Ryan got enough on Whearty’s shot to turn it out for a corner.

Streamstown didn’t hang about when it came to posting a reply, but spurned a gilt-edged chance to draw level. Within seconds of that Whearty chance the visitors poured forward, Paul Doyle winning the Celtic kick-out and feeding Craig Phelan.

A good run into the corner was followed by an equally impressive cross which Doyle met with a header - but he didn’t realise he had time to take the ball down, which could have led to a better strike at the target.

The sides continued to trade chances, but neither could alter the scoreline. Evergreen went closest, as Whearty thundered a shot off the butt of a Celtic post. Tommy Earls did well to whip the rebound back across the face of goal, but Jason Ryan managed to tip it over the bar.

Craig Phelan led the Celtic charge as half-time loomed, doing well to break down the right wing and latch on to a through ball. A thorn in Evergreen’s side in the first half, Phelan shimmied into a shooting position, but a forest of defenders blocked his strike.

Incredibly, after such a high tempo first half the game resumed in a more tepid fashion. There was only one chance of merit in the early stages of the second half. Chris Whearty was the architect, keeping a ball in play before jinking down the line and teeing up Ciaran Snype.

Snype’s first shot was blocked by a Streamstown defender. His second brilliantly kept out by Jason Ryan’s point-blank save.

The half played out in a stalemate fashion for a long spell, but as full-time loomed Evergreen’s fitness levels helped demolish their rivals.

The hosts hadn’t looked overly troubled by Streamstown in the second half, but gave themselves some breathing room ten minutes from time.

Sub Sean Barcoe, who used his physical strength to give Celtic some headaches after his introduction, was heavily involved as he knocked down Tommy Earls’ long throw. Niall Andrews flicked it across goal, where Conor English stole in at the back post to add the finishing touch.

The two-goal lead became three four minutes later. Andrews doubled his tally with an emphatic finish, powering his header inside the far post after Damien Kelly’s free caused all sorts of problems.

There was still time for Evergreen to seal their place in the last 32 in some style. Awarded a free after he was upended some 25 metres from goal, Chris Whearty dusted himself down and stood over the dead ball. He made no mistake, hammering his shot past the wall and beyond the reach of Ryan for an impressive finish.

Freebooters will join Evergreen in the hat for the last 32 draw after beating Culdaff 3-0.

The Blues had to go on a seven-hour trip North to play their Donegal opponents on Saturday evening, but the trip proved worthwhile.

Scoreless at half-time, ’Booters stunned the Inishowen League side when Jason Hennessy blasted home a free-kick.

Two more from Dessie Hayes, part of the Irish side who competed at the Mini Euro 2014 finals in Montenegro, wrapped up the win for Anthony Hanney’s side.