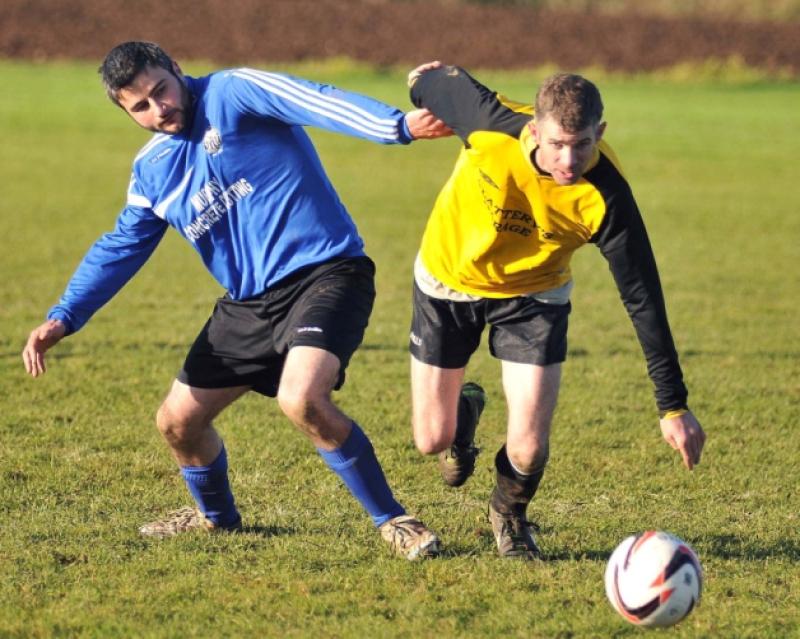 Emmet Nugent was on-song as Fort Rangers returned to winning ways in Division One.

Emmet Nugent was on-song as Fort Rangers returned to winning ways in Division One.

The young striker helped himself to a second half hat-trick as Rangers got the better of fellow promotion chasers Stoneyford United - and the biting cold - on Sunday.

His first goal, the all-important deadlock breaker, saw Nugent bravely put his body on the line. Watching as John Bambrick’s diagonal ball split Stoneyford open, Nugent saw his chance and went for it.

Sprinting through, Nugent got to the ball a split-second ahead of United’s outrushing Brian O’Shea. The striker won the race, getting off a low shot that found the inside of the far post, but not before coming off second best in a hefty clash with the ’keeper.

Taking that knock was the by-product of going for goal, but Nugent’s determination was an example of how Fort were prepared to give their all for the win.

Stoneyford were just as keen for all three points, pushing hard for the opening goal in the early stages. The visitors seized on some Fort hesitancy and broke forward in waves after 18 minutes, but Ciaran Colfer’s teasing corner flashed over the crossbar.

They pressed on again soon after, going close with another good chance. The Rangers defence were left on their heels when James Moran carved them open with a diagonal ball from the right. His delivery was inch-perfect for Conor Coffey to run on to, but David Buggy dashed from his line to smother the danger.

While Fort found it hard to get to grips with the conditions - the crossfield win made their lives difficult - Stoneyford looked more likely to make the breakthrough. They went agonisingly close to doing just that after the half hour, with a chance that came out of nothing.

There seemed to be little danger when Brian Donovan took a few steps into the Fort half, but he clearly saw something others didn’t.

Although still some way out Donovan went for it, unleashing a dipping swerving shot that had Buggy scrambling across his line, but the ball clattered off the netminder’s left post and bounced out.

The chance gave Stoney a surge in confidence, but they couldn’t make it count. They could and should have taken the lead in the 33rd minute when an unmarked Moran got on the end of Colfer’s teasing corner, but his header flashed over the bar.

Fort turned the corner in the second half, coming out with more attacking intent. Eddie Nugent served notice when he let fly with a menacing 51st minute free-kick, whipping the ball past the wall, but O’Shea made a fine save to push the ball to safety.

O’Shea could do little to prevent Fort from taking the lead just six minutes later thanks to Emmet Nugent’s bravery.

The goal settled the hosts somewhat - Buggy still had to look smart to deny Moran from grabbing a 66th minute equaliser - but they relaxed a little more when Nugent doubled his and Fort’s tally 16 minutes from time.

Pressure from Richie Hogan paved the way for goal number two, the midfielder winning a tussle in the centre before slipping the ball forward. Nugent was on it in a flash, drawing O’Shea from his line before tucking a sweet shot inside the netminder’s left post.

That strike made the points safe, but there was still time for Nugent to round off his day with a treble.

This time he showed his skills from a dead ball, whipping in a free from the right that flashed over the ball and dipped under O’Shea’s crossbar.