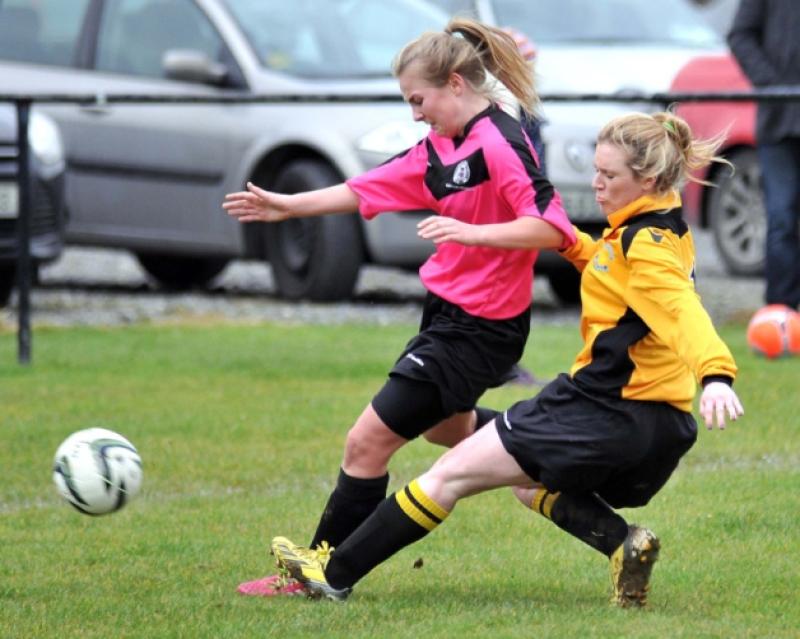 A new season - but the same impressive result.

A new season - but the same impressive result.

It was almost a case of deja vu as the Kilkenny & District League’s women’s team found the Combined Counties between them and a place in the Leinster inter-league final. However, this time the reigning champions were more clinical.

Unlike last year, where Kilkenny didn’t score a second goal until the game’s dying minutes, this year they hit the Combined Counties with a triple whammy that left the visitors in no doubt that they had been beaten by the best.

Similar to last year’s semi-final, which was also played in Derdimus, Kilkenny took an early lead. Unlike 12 months ago, they kept that high tempo up and never let go until they were safely through to the final.

Kilkenny were keen to make a good start, but even they must have been surprised at how easily they prised the visitors apart to plunder a quick opener.

The game was just six minutes old when the Cats first bared their claws. Keeping a high line after they had won a free, Kilkenny kept looking for a route to goal.

Irene Guilfoyle provided the outlet, winning possession on the right and working it on to skipper Jenny Brennan. Spotting a darting run from Breda O’Neill, Brennan played a quick ball to the corner.

O’Neill was on it in a flash, turning her marker and flinging in a dangerous cross which Jenny Reddy met with a stooping header at the near post. Counties ’keeper Éabha Walsh managed to get a hand to the ball, but couldn’t stop it from finding the back of her net.

Counties were wounded by that goal and were thankful to Walsh that they didn’t concede another within minutes.

Becky Walsh - another of the impressive young players to shine this year - showed tenacity to chase down Niamh Bolger’s booming clearance and send Reddy on her way.

Holding off her marker, Reddy bore down on goal and let fly, but Burke did well to palm the shot away.

The danger wasn’t over, as from the resulting throw-in Walsh unleashed a looping drive, but Burke was there to push the ball to safety.

The visitors shook off the defensive shackles long enough to test Kilkenny ’keeper Jennifer Russell. Amy Matthews had their best chance when she beat the wall with a 10th minute free, but Russell was well-placed to make the stop.

That was as close as the Combined Counties came to getting back on level terms as, 10 minutes later, they were two down. Breaking down a Counties move Jenny O’Keeffe played a perfectly-weighted ball straight into the Breda O’Neill’s path.

The delivery was food and drink for O’Neill, who didn’t have to check her stride before confidently slotting a low diagonal shot inside Burke’s right hand post.

Kilkenny were in top gear by that stage, and all but sealed their place in the final with a third goal just eight minutes later. Once again their keenness to close the opposition down paid off, as Becky Walsh piled on the pressure on the right flank and took control of the ball.

She didn’t hold on to it for long. Spotting Jenny Brennan running from midfield, Walsh threaded a low ball across the face of the box for her captain to run on to.

Brennan took one touch to control the ball, then used a second to hammer it into the bottom right corner.

The hosts could have made the game safe before half-time. In an excellent move that swept from the left flank to the right Kilkenny stormed forward with Walsh, Brennan, Jemma Komar and O’Neill bombing forward.

A superb tackle from Counties captain Leona Archibold denied Walsh a clean strike on goal, her netminder Burke doing well to Jenny O’Keeffe from the rebound.

Kilkenny did, however, make the game safe within eight minutes of the second half. The threat of Jenny Brennan’s dead ball delivery was highlighted when the captain fired in a corner which Éabha Burke couldn’t clear.

The Cats sensed a chance and pounced. Several players went for the loose ball, but Jenny O’Keeffe beat her colleagues to the punch as she fired home the fourth goal from close range.

That was the signal for Kilkenny to drop down a gear or two, but they still looked more likely to hit the target. Jenny Brennan sent another raking shot whistling past the post, before sub Lauren Valentine used her pace to tee up Breda O’Neill, but her 58th minute effort crashed into the side netting.

The Combined Counties offered little in the final half hour, but still Kilkenny failed to switch off. The champions kept going until the final whistle, when their place in the March 8 final was confirmed.