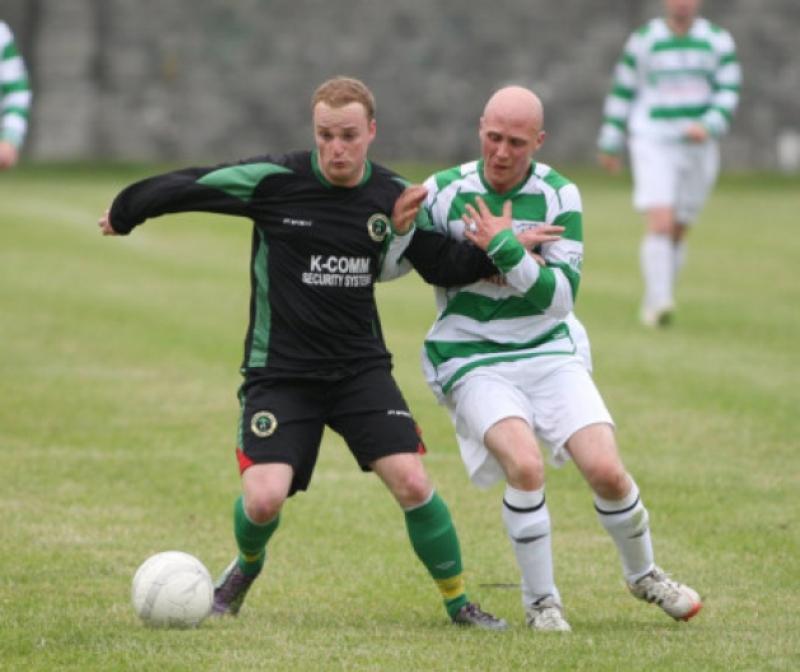 A second half penalty saw Carrick United become the first side to reach the semi-finals of this year’s Mock Lawlor Memorial tournament.

A second half penalty saw Carrick United become the first side to reach the semi-finals of this year’s Mock Lawlor Memorial tournament.

Adam McSherry was spot on from 12 yards as United got the better of Freshford Town, one of Kilkenny’s form teams from last season, at the Fair Green on Monday.

The Waterford League visitors were sharp on attack and almost made a dream start to the opening game in the annual charity curtain-raiser to the junior soccer season.

Moving swiftly, Carrick almost caught Freshford cold inside two minutes after Barry Walsh’s ball from the right was flicked on by Jamie Waters to Thomas Ryan, who stole in at the back post. With the Town defence outnumbered, it looked like Ryan had the simple task of tucking the ball away, but Liam Hickey managed to get across and make the block.

United, the reigning Waterford Premier Division champions, were faster out of the blocks. Both Walsh and Waters had chances to steal the opening goal inside the first 15 minutes, but Town netminder Calvin Brophy made some good saves to keep his side level.

Once Freshford, who were missing Nigel Stanley in defence, found their feet they took the game to Carrick. Showing great pace Town began to attack in waves, going close with one move that almost led to a stylish opening goal with 21 minutes on the clock.

Driving from the right flank to the left, Hickey and Eoin Vaughan combined well before a neat one-two between James Sweeney and Gary Corcoran yielded a teasing cross, but the delivery was just too high for the incoming Paul Guinan to guide home.

Despite being a preseason game the match offered plenty of attacking fare, with both sides pushing hard for the lead. Carrick, who had some penalty appeals waved away, went closest on the half hour when Waters chased down a back-pass and put pressure on Brophy. The ball spun back in the striker’s direction, but Brophy got enough on the shot to force it wide.

The danger wasn’t fully over. Defender Stephen Kerwick came up from the back for the resulting corner and should have forced it home, but he scuffed his chance at the back post.

Freshford increased their efforts as the half wore on, but couldn’t find a route to goal. Vaughan ended a mazy run with a wicked shot that curled towards the inside of the far post, but Ger Robinson dived to his left to push the 36th minute strike to safety.

Chances continued to present themselves in the second half, but neither side could profit. Ian Clery had a cheeky chip cleared off the line by Michael Farrell, while Vaughan should have scored when played through by a careless Carrick back-pass, but he blasted wide when unmarked in front of goal.

That miss proved costly when McSherry powered home his 65th minute spot-kick after an Anthony Power cross was handled in the box. The goal took the sting out of Freshford, who finished with 10 men after Davy Brennan was dismissed for a second yellow offence.