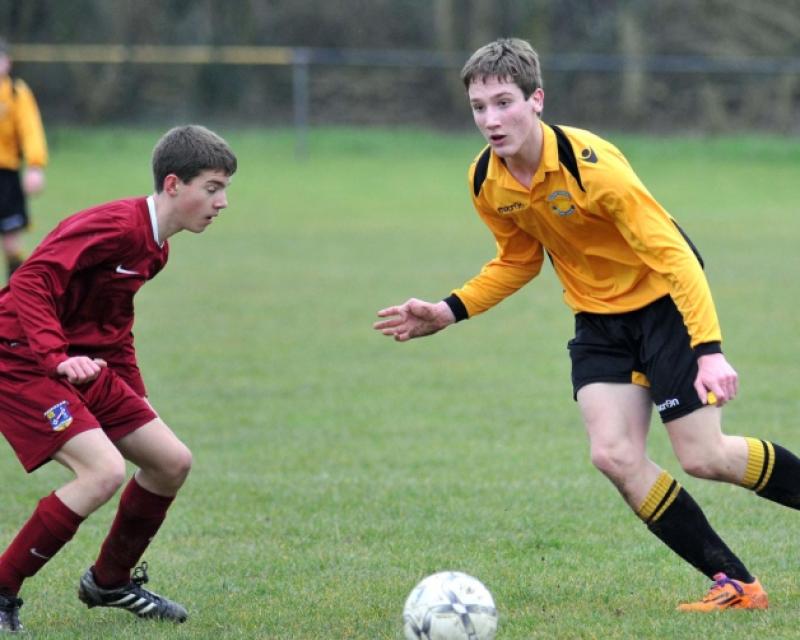 An unbeaten record was proudly maintained as Kilkenny’s under-15s marched on in Leinster, but few points will be as hard-earned as their latest.

An unbeaten record was proudly maintained as Kilkenny’s under-15s marched on in Leinster, but few points will be as hard-earned as their latest.

The Cats had to put in a real shift to contain a lively Kildare, with both sides probably happy enough to take a point apiece from Saturday’s entertaining Derdimus decider.

Despite being a tight first half, chance-wise at least, the two sides showed a good thrust as they took it in turns to search for openings.

Kilkenny had the upper hand in the possession stakes, much of that thanks to fine displays from the likes of Justin Cahill and Ned Kirwan, not to mention Cillian Power and James Brennan on the flanks, but they couldn’t find a way to breach the Kildare goal.

That’s not to say they didn’t try. Adam Masood and Adam Kenna linked up well, the latter having two great chances before the half hour, but while he did well to beat the defender each time he couldn’t force the ball past netminder D.J. Earley.

Kildare weren’t there just to make up the numbers, however. Their patient play almost paid off when a defensive lapse allowed Andrew Farrell to nick the ball away and feed Darragh Kelly, but he fizzed his 33rd minute shot over the bar.

Just when it looked like the game would stay level into the second half, the Cats lit the afternoon up with a blockbuster. Adam Masood was responsible after Kildare’s tactic of playing the ball around their defence blew up in their faces.

Seizing on a slack miscontrol, Masood robbed Tommy O’Donovan of possession and let fly from distance, delivering a thunderous long strike which screamed over Earley and dipped under the bar.

Kilkenny worked quickly in an attempt to double their lead in the second half, Power testing Earley with a crisp snapshot, but things took a turn for the worse when they lost Kian Moran to injury within six minutes of the restart.

With Moran out of the picture - the Cats missed his bustling play in midfield, not to mention his tough tackling - Kildare began to grow in confidence. That culminated in a free-kick awarded inside the D on 59 minutes, but Darragh Kelly blasted his strike into the wall before James Carey’s follow-up was blocked.

The hosts couldn’t repel their rivals for too much longer, however, who drew level after sub Shane O’Connor was upended in the box.

Aaron Mills took the spot kick and made no mistake, drilling his 63rd minute kick inside the bottom of the left post.

That strike ignited Kildare. But for the brilliance of Kilkenny’s ’keeper they could have gone home with all three points.

The netminder did well to thwart Andrew Farrell, who was played through by a fine diagonal ball from Mills on 68 minutes. The striker got the better of his marker but not Walsh, who raced from his line and spread himself to block the shot.

He saved his best for last though, as Kildare went within a whisker of an injury-time winner. The Cats seemed to be holding on in stoppage time - Mills gave them a scare with a header that flashed past the wrong side of the post - and almost paid the price when Mills whipped in a free-kick.

For a split-second the ball seemed destined for the top right corner, but somehow Walsh got across his line to claw it out and, with it, save his a side a point.

Elsewhere on the inter-league scene was it was two wins from two for the Kilkenny under-16s, who followed up their opening day win over Kildare with a 4-1 victory over Wicklow.

The side, coached by Ben Ryan and Craig Wall, made the trip to Shamrock Park look easy, as they dominated their hosts.

“It was a good win and a good performance,” said Wall. “There is a lot of potential in this team, but we’ve two big games to come.”

Next up for the Cats is a crunch game away to Wexford in March.

Elsewhere the under-12s made it three from three when they beat Drogheda 4-3 on Sunday. They’ll close out their group away to Kildare in March. The winner of their section will play the winners of Group A (Wicklow, NDSL, SDFL, Wexford and the Midlands) for the right to represent Leinster in the national semi-finals in late April.

The under-13s tasted their first loss of the campaign when they went down 1-2 to Drogheda. Ben Cantwell was on target for the Cats.